Red Dawn for a New Decade

I kicked off 2020 by giving a morning talk at Woodford Folk Festival called ‘A Rough Work-in-Progress Blueprint for Revolution.’ Despite half the festival still being asleep or hungover from NYE celebrations, it was exciting to see how much energy and interest there was in the discussion. People stuck around for a solid hour after my talk to keep unpacking the ideas and sharing their own perspectives (I’ll try to post a recording of the presentation sometime soon). A lot of people are hungry for change, and searching for a way forward.

As we enter this new decade, our news headlines are dominated by environmental disasters. Mega-fires are raging across multiple Australian states and half the continent is drought-stricken. Meanwhile just a couple hours’ flight to the north of us, Indonesia is experiencing catastrophic rainfall, with widespread flooding leading to around 50 confirmed deaths, and an estimated 500 000 people made homeless so far (the death toll from flow-on impacts like disease and malnutrition will be much higher, but won’t be covered by western media).

The Jakarta Metropolitan Area has a population of over 30 million people, living in an area half the size of Brisbane. Much of Jakarta has been inundated, and the city may never fully recover. The Indonesian government is already planning to abandon Jakarta as the nation’s administrative capital and establish a new capital city in Borneo.

Australia is one of Indonesia’s closest neighbours. Jakarta is closer to Darwin than Brisbane is. If not for our racism and selfishness, Australia would probably be the most logical destination to resettle southeast Asian climate refugees. We’re certainly in a better economic position to do so than other nearby countries, but I doubt anyone’s going to be talking about that idea in a hurry. 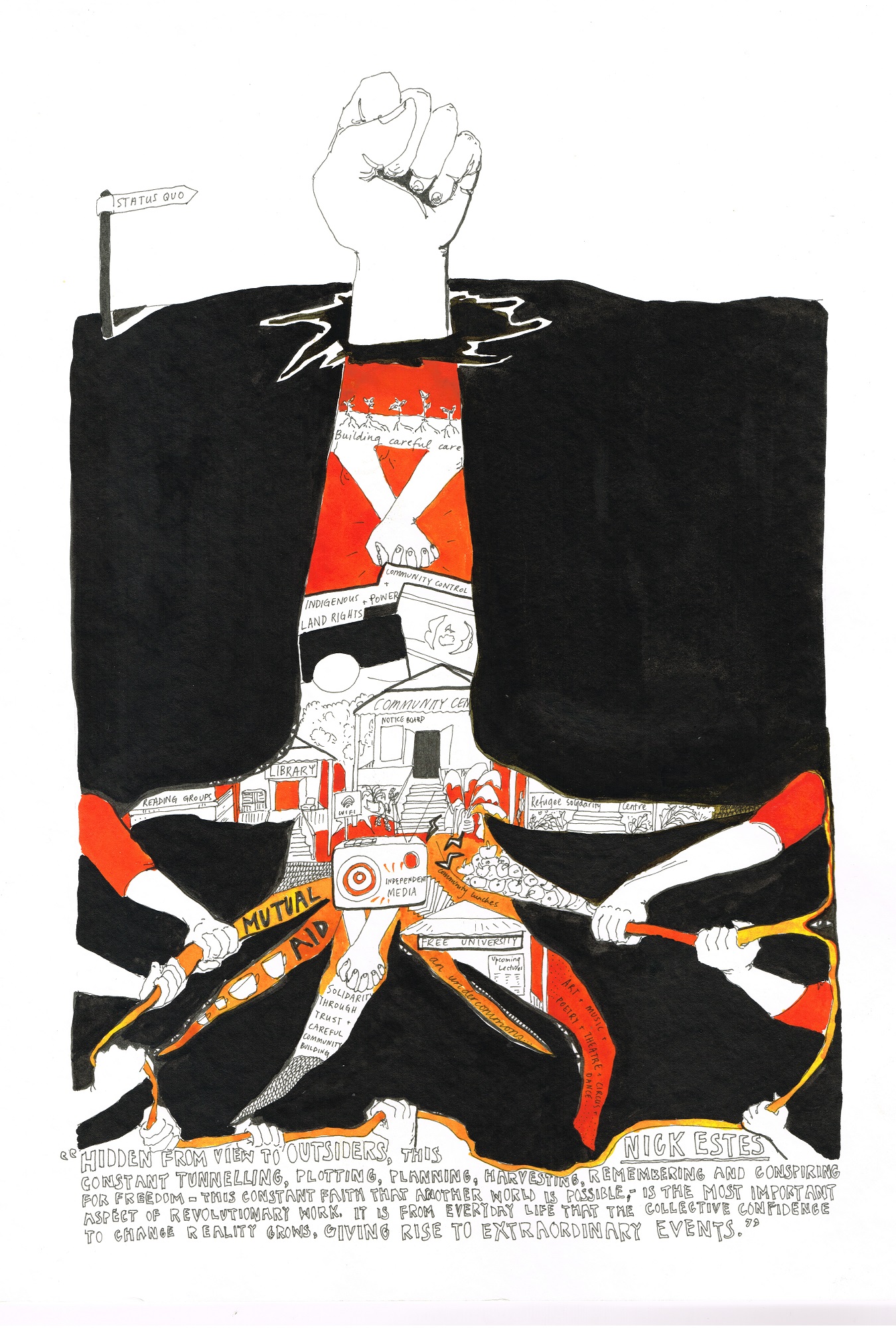 I find it hard to get my head around the details in the news reports - millions of hectares of forest incinerated, millions of people suddenly deprived of access to power or clean water. Numbers and statistics don’t really tell the full story, but it’s bleak.

Many of us have started talking about how the long-predicted ‘climate apocalypse’ is finally here.

But in fact, many parts of the world, and many people in our own city, have been experiencing crisis for a long time now. A lot of First Nations communities would argue that the apocalypse actually began over two hundred years ago. The changing climate is definitely a crisis, but it’s also compounding existing ongoing crises that we’ve ignored for too long.

The lens through which we view these events is important. Are the Australian droughts and bushfires a ‘disaster’ that we have to recover and rebuild from? Or are they simply the latest and most significant reminder that almost every aspect of our way of life must change in ways that most of us rarely contemplate?

Australians are vacillating between two different universes this week. People are still swimming at the beach and cheering at the cricket, while elsewhere people are running out of water or fleeing 10-storey flames. My work inbox is still receiving complaints about inadequate street parking and the lack of grass at the local dog off-leash area. In contrast, I don’t get many emails about the fact that Brisbane’s homeless population is hovering around 10 000 and still rising (and unfortunately the politicians who run our government don’t get enough emails about this either).

We’re in the midst of multiple overlapping crises, yet half the continent seems hell-bent on looking the other way and acting as though we can carry on with business as usual. Perhaps denial is an understandable response to feeling disempowered and overwhelmed, but it’s pretty bizarre…

“The Aussie batsmen are doing pretty well aren’t they?”

“By the way, did you hear the bushfire death toll is up to 16 now?”

I’ve heard several people over the last few weeks lament the fact that there isn’t another federal election due for three years, and that PM Smoko is so unpopular right now that the Liberals would struggle to hold on to power. While that might be true, I don’t think Albanese would be much better at responding to any of the crises we’re currently facing. He spent part of December touring regional Queensland promising continued support for coal exports, when what he should have done instead was outline a transition plan to retrain workers and support communities to shift away from dependence on an economically unviable and environmentally destructive industry.

But even though the next federal election is still at least two summers away, there are several important elections coming up this year that will shape the national political landscape. In just 12 weeks, residents across Queensland will vote in local government elections. Here in Brisbane, the Greens have a strong chance of winning three or even four council seats off the LNP. As I’ve written about here, a swing towards the Greens at the Brisbane City Council election would dramatically shift Queensland politics.

So those of you who are feeling a sense of urgency and a desire to take action might want to start by volunteering for the election campaign.

Lately I’ve been hearing more people complaining about how divided our society and our political system has become. They say things like “If only we could stop attacking each other and focus on solutions!” which certainly resonates with me to a point. I think it’s fair to say that the tone of debate, particularly in some online spaces, is unnecessarily hostile.

But a lot of this so-called ‘division’ isn’t new. What’s actually going on is that marginalised voices and downtrodden groups finally have platforms (particularly on social media) where they can challenge establishment power holders and argue against the status quo. (Some of us are even getting organised enough to win seats in elections)

Australians have been saying and doing racist things for decades. The difference is that now anti-racist activists actually have paths to get their own messages out there without being censored by the conservative mainstream media. The same is true for debates about sexism, extractivism and a whole bunch of other issues.

In some cases, the people complaining that “Everyone is so disrespectful these days! I wish people could stop attacking each other!” are actually just yearning for a past era when more privileged members of society could say and do incredibly unjust and disrespectful things without being criticised publicly, because the rest of us were too scared to speak out.

For those of us who understand the need for major systemic change, I think one of the big challenges for 2020 and the coming decade will be to understand and define the lines between those who are complacent/misinformed/apathetic/disengaged, and those who are actively hostile to change and have strong vested interests in defending the status quo.

The biggest division in our society will be between those who'll fight to keep things more-or-less as they are, and those who are realistic about the need for a rapid transition towards a more equitable and sustainable way of life.

Personally, I’m looking forward to the coming year. I’m apprehensive about the council election campaign, because I anticipate a lot of negative attacks from the mainstream media and conservative commentators, but also excited about the opportunities for change. I’m channelling the grief and anger I’ve been feeling into activism and community capacity-building, because it feels nourishing and valuable and empowering.

We mustn’t be naïve about the opponents we’re up against or the nefariously effective tactics they’ll employ.

But we need to hold on to hope, and seize joy wherever we can find it. Sinking into despair won’t stop the world burning.