The newly established Bunyapa Park at the corner of Vulture St and Thomas St in West End is proving immensely popular with residents.

As many residents are already aware, the Aboriginal word ‘bunya’ describes a native pine tree species which produces large edible nuts, but also the festivals which were held in the Bunya Mountains, when clans from across South East Queensland gathered to harvest bunya nuts. The Bunya Festivals were a time of celebration, ceremony and strengthening communal ties. Local elders chose the word ‘Bunyapa’ (‘place of bunya’) for this park, in the hope that it too will be a hub for community and celebration.

Part of the plans for the park contemplated a range of public art projects, which my office will be coordinating over the coming months. The first of these will be to get the original artists who produced the existing mural along the back wall to touch up and refurbish their work, and extend that mural onto the toilet block. We'll also be using blackboard paint to create a community noticeboard on part of the toilet block where people can use chalk to write up info about upcoming events in the park. I've organised a local Aboriginal art group to paint the front faces of the stage area and the white wall to the side of the stage. This project will hopefully kick off early in the new year.

Call for Expressions of Interest

Apart from the above-mentioned plans, there are several other parts of the park that could be improved by different community art projects. I'm putting out the call for any artists who would like to be involved in one or more of these projects to email an expression of interest to [email protected] with 'Bunyapa Art' in the subject line. If you can include a rough sketch or drawing of your proposal that would be great. We'll liaise with everyone who submits an expression of interest, before holding a community vote to decide which artworks should be installed in the park. 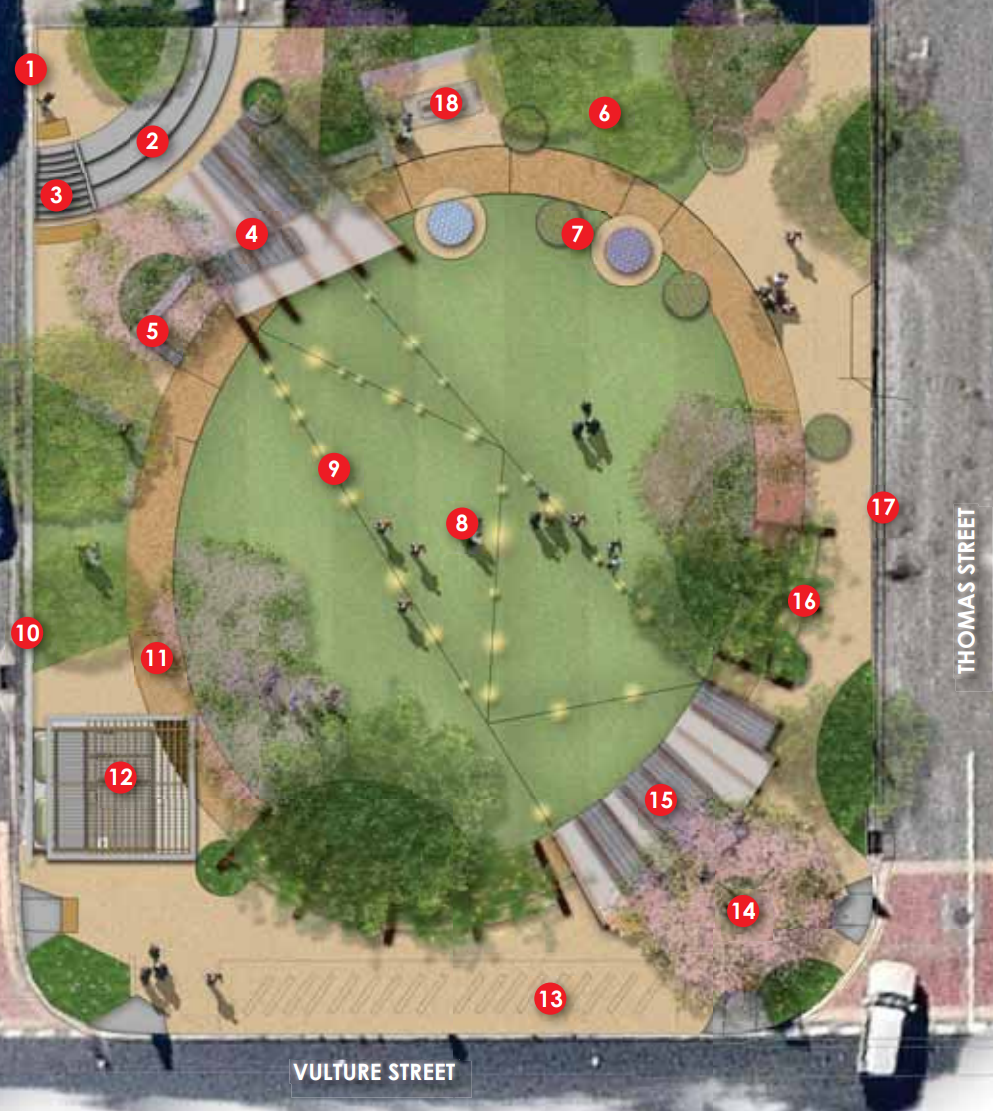 While Bunyapa doesn't have quite enough room for a full-sized playground, the original plans for the park contemplated the inclusion of a play-based sculpture which will add to the visual amenity of the park, and that both children and adults will enjoy interacting with. The proposed location is in the north-east corner of the park behind the community garden beds (marked as number 6 in the accompanying image). We haven't defined strict criteria for this sculpture because we want to remain open to novel proposals from artists, but it will be important that the structure:
- is weather-proof and able to withstand heavy winds/storms
- isn't overly prone to vandalism and won't fall over even if lots of people are climbing on it
- doesn't have moving parts/expensive components that will require a lot of maintenance
- doesn't include tight spaces where someone could get their hand or foot caught

We are also open to expressions of interest to locate permanent or temporary installations in other parts of the park, but it might be difficult to find a space that doesn't block the key pathways and interfere with other possible uses of the park. Depending on the proposal, we hope to be able to find up to $10 000 in local grant funding for this project, and will consider organising further fundraising if necessary, but we're also open to funding multiple smaller sculpture projects. While the successful proposal will ultimately be decided by a public vote, we hope it will respond in some way to the name and theme of the park as described above.

Available budget: I will cover the cost of paint + a nominal fee of $200

The park's circular footpath is well used by children on scooters and bikes who ride laps around the park. This is a large canvas that could potentially be painted as a single cohesive artwork, or with a series of many smaller artworks. It might be a good opportunity to more clearly demarcate a fun-looking riding track for kids, and/or to connect to the themes of other artworks in the park. Depending on further consultation with council maintenance workers, it might make sense for artworks on the path to be conceptualised as temporary art installations with a two-year lifetime, as these will deteriorate faster due to exposure to the sun and rain. We could potentially paint a new artwork on this pathway every two or three years.

Paint the sides of the raised garden beds

Available budget: I will cover the cost of paint

There are several raised circular garden beds in the park (marked as number 7 in the accompanying image) which could each be painted individually by different artists, or all painted by the same artist as part of a single project. It might also be possible to organise a community painting day where we allow a larger group of parents and kids to come and paint different segments of the garden bed walls with whatever images they want.

As alluded to above, we're also open to expressions of interest for art projects on other surfaces and locations around the park. Feel free to send us a short email with questions or ideas at [email protected]

I'm deliberately keeping things pretty open at this stage, and will communicate further with all interested artists to clarify expectations and refine criteria if necessary. Once we have a better idea of the number of artists who are interested in being involved, we'll release more info about the public voting process.

Expressions of interest for the above-listed projects will close on Sunday, 29 April. Given that some people can be a bit busy over the summer holidays, we might consider extending the deadline for proposals depending on what kind of response we get.