What's the likelihood of a new green bridge between Bulimba and Teneriffe?

I’m one of six members of Brisbane City Council’s ‘Public and Active Transport Committee’ (which although it sounds like it might have a bit of influence, is actually a relatively powerless rubber-stamping committee that only meets for half an hour per week). A few people have asked me about what’s happening with proposals for a green bridge between Bulimba-Teneriffe or Hawthorne-New Farm. Mayor Schrinner still hasn’t decided/announced where his fifth new green bridge will be, but it seems like the LNP are backing away from the idea of a Bulimba bridge, even though a lot of residents seem to think it’s a good idea.

Here’s my read of the landscape as it stands…

A bridge would be very very expensive.

We don’t know accurate cost estimates of either a bus bridge or a walking/cycling bridge over this stretch of the river. We know a feasibility study was undertaken by the State Government, but the cost estimates haven’t been released. There are heaps of variables influencing bridge costs, but based on recent cost estimates we’ve seen for other bridges in Brisbane, even a simple pedestrian/cycling bridge is likely to be $150 million minimum. A bus bridge is almost certainly going to cost more than $200 million and perhaps upwards of $300 million once you include land acquisition costs.

This stretch of the river presents particular challenges

The river is reasonably wide between Bulimba and Teneriffe. A bridge has to be tall enough to allow vessels to pass under it, but the taller you make it, the steeper the climbs become and the more ramping you need at either end to get up to the required height. All levels of government seem keen for a bridge that won’t obstruct taller vessels coming up this part of the river. The Story Bridge has a clearance of 30 metres. While it’s not especially common these days for such tall vessels to come that far up the river, I can see why governments are reluctant to permanently close off navigable river access.

The alternative is to build some kind of drawbridge or opening bridge that could be quite a bit lower than the 30m Story Bridge, but which can be opened occasionally when taller vessels need to pass through. Still expensive and tricky though.

Some people might argue that it doesn’t matter if you have a lower bridge, but cutting off inner-city access altogether for tall-masted vessels is potentially going to attract much more opposition from other groups who for various reasons feel it's important for these vessels to keep accessing the inner-city.

There’s obviously a bit of demand for a walking and cycling link between the eastern suburbs and the 4005 postcode, and likely to be even more demand in future as more people take up emobility. But there isn’t as much high-density development on either side of the river there, or major local attractors/destinations like universities and train stations that supported the case for the West End pedestrian/cycling bridges.

I think reasonable people can and will disagree on this point, but my sense is that it would be pretty hard to justify spending $150 million purely on an active transport link when there are other more urgent active transport spending priorities around Brisbane. For a bridge here to be worth the money, I reckon it would really need to carry buses too.

Modern road design standards suggest safe bus lanes need to be 3.3m wide minimum, and ideally 3.5m or 3.6m. Even if in future you were to use a smaller style of electric minibus or a more slender light rail vehicle, a bridge needs at least 6.7m of width to accommodate a single vehicle lane in each direction. Add on some very narrow bike lanes and pedestrian paths, and we’re looking at a bridge structure that’s AT LEAST 12 or 13 metres wide, and probably a lot wider. (For comparison, the UQ Green Bridge to Dutton Park is around 20 metres wide.)

Whether you have a taller bridge with a 30-metre clearance, or a shorter bridge that opens and closes, it’s still going to be a reasonably bulky structure. You also need room at both ends for buses to access the bridge (ideally without getting caught up in general traffic). Finding enough room for a bus bridge and the landings is almost certainly going to require some property resumptions on one or both sides of the bridge. As we’ve seen with the West End bridge proposals, riverside residents are also likely to object quite vocally to impacts on their river views.

To attract funding, a bridge would need a lot of political support

The LNP council administration announced that they would build 5 new green bridges for Brisbane (one of these is only over Breakfast Creek so it’s really more like 4 ½). But they’ve only allocated $550 million towards these projects, which means they’ll need a couple hundred million in additional funding from either state or federal government if they’re going to build all of them. In general, it’s unusual for local councils to build major infrastructure like this, and there’s a reasonable argument to be made that such projects should be state government or federal government-led, rather that State MPs ‘calling on’ a local government like Brisbane City Council to fund such projects. But Mayor Schrinner has already publicly committed to the bridge, so he’s kinda backed himself into a corner a little bit. He’ll probably be seeking federal funding if the state government remains reluctant to chip in.

If a bridge is seen as controversial because of the impacts on local residents immediately around the landing areas, politicians and senior public servants are much less likely to see it as worthwhile to allocate a lot of funding towards such a project. It’s not enough to have citywide majority support for a bridge along this stretch of the river. To get funding prioritised towards a Bulimba bridge ahead of any number of other infrastructure projects that governments might be tempted to fund, it’s not enough to have 51% support for something. You need really widespread and enthusiastic support, particularly from local residents.

At both the local and state level, some Labor Councillors and MPs have been suggesting they support a bridge across this stretch of the river, but without explicitly acknowledging the costs and challenges I’ve mentioned above. There’s no serious interest at all from Queensland Labor to put even partial funding towards such a bridge.

Meanwhile, the LNP council administration seems to have decided that there would be too much local opposition to a green bridge in Bulimba/Hawthorne from people who live nearest the landings, and that it would be too politically damaging to push for a bridge in this area.

The federal MPs who cover the two relevant electorates – Griffith (on the inner-southside) and Brisbane (on the inner-northside) – haven’t yet said anything much about whether they support a bridge or which level of government they think should fund it. I know a couple of cycling advocacy groups have written to them to ask, but I’m not aware of any public statements yet.

Basically what all this boils down to, is that from what I can see, unless there is a really strong and enthusiastic bottom-up push for a green bridge from residents living in Bulimba, Hawthorne, New Farm and Teneriffe, the political establishment will probably decide it’s not a high enough priority for funding compared to all the other stuff that money could be spent on. ‘Enthusiastic support’ would look like a petition with thousands and thousands of signatures (not just a couple thousand, but several thousand), a wave of emails from local residents to the mayor and the relevant State MPs calling for the bridge, and public meetings/rallies demanding a better public transport link between the inner-north and inner-eastern suburbs.

In the absence of that kind of well-organised advocacy from locals themselves (as opposed to just from local politicians) I don’t see a bridge over this stretch of the river happening any time soon, and I expect the LNP will be looking at other locations further up the river (upstream of the CBD) where there’s more space along the river banks to play with and fewer potential objections from wealthy riverside residents who don’t want their river views obstructed.

Personally I think a green bridge somewhere along this stretch of the river would significantly improve our public and active transport network, but I’m still not sure whether such a project would represent good value for money compared to other projects that the money and resources could potentially go towards. I’m interested to know others think about this… 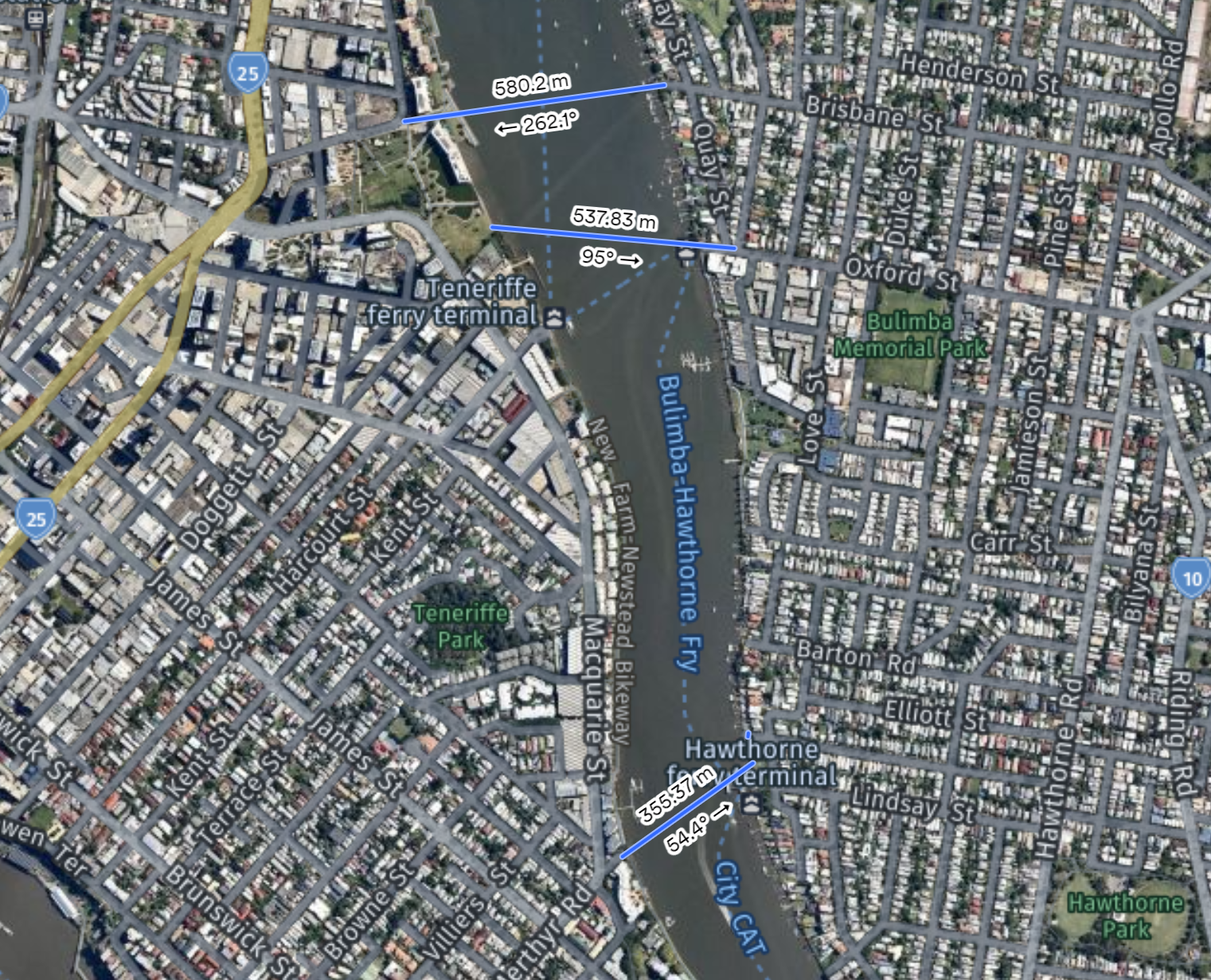 Don't read too much into this image. I was just drawing lines across the river at points that seemed like they wouldn't require too many private property resumptions...