Council has released the final concept design for the expanded park at the corner of Carl St and Tottenham St in Woolloongabba.

After council recently acquired neighbouring properties, we've expanded this park by almost 1000m2. The next step will be to finalise the detailed design and start construction.

I'm reasonably pleased with this design, as it's a pretty close match to the community concept design that we developed through our participatory design process last year. 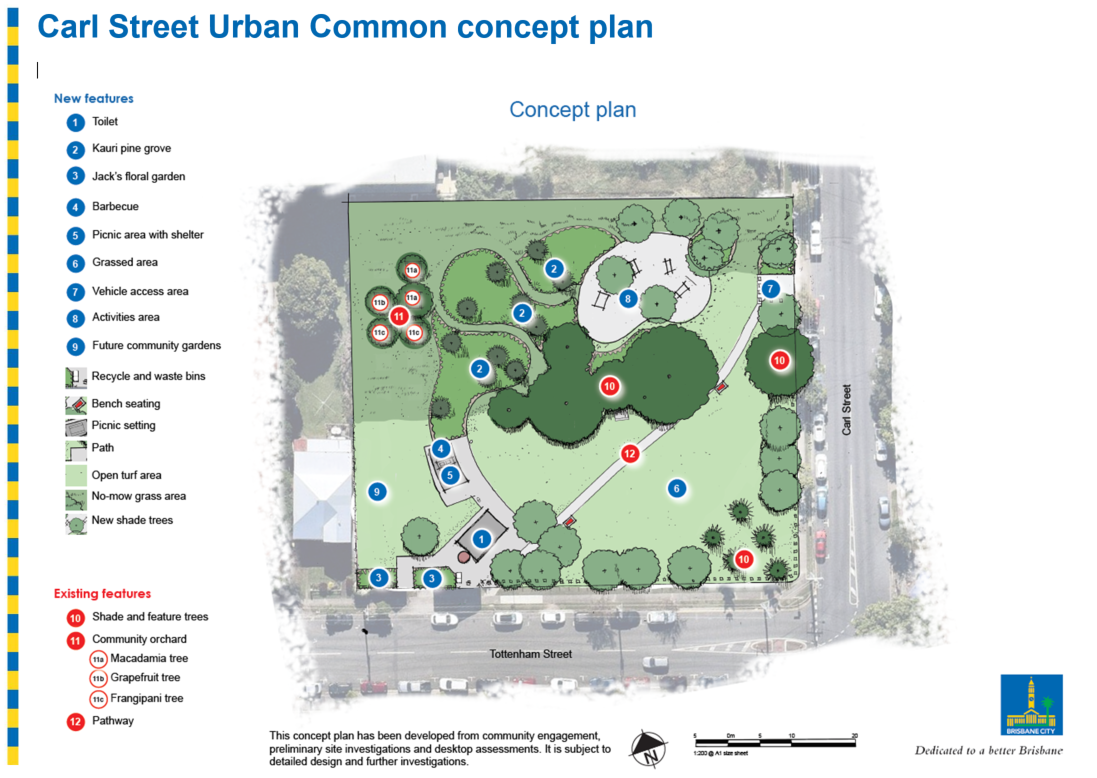 The project includes an all-ages play area for which the details are still being fleshed out. This will be less like a conventional playground, and more reminiscent of spaces like the Fremantle Parkour Park, encouraging adults and children to play, climb and exercise together.

The park also includes a small community fruit orchard and space for a future community garden (we've included a small storage shed as part of the toilet block design to support the community garden when it eventually gets up and running).

There's a windy secondary path through the park which will eventually be concreted, which improves disability access and provides a circuit connecting to the main path for younger kids to learn to ride their bikes on.

A fair chunk of the park is being maintained as a 'natural' green space with native trees and a denser understorey to provide habitat for native wildlife.

There's also a picnic shelter and BBQ near the toilet block, plus enough open space to kick a ball around or throw a frisbee.

The two main differences between this park layout and the design that came out of our community workshop are:

1. We'd also suggested a covered stage area near the toilet block to support community events and festivals. The layout has retained enough open space so that we can add in the stage later if we want to.

2. We asked council to include a nature play area immediately to the west of the all-ages active play area. One of the main reasons this wasn't formally included on the design is that council's 'nature play' design standards are quite restrictive due to health and safety concerns.

However there's still plenty of space available, and I'm hopeful that as the local community takes more ownership of the park, we'll be able to create an informal nature play space between the community orchard and the all-ages play area. Kids need to be able to get their hands dirty and climb trees from time to time, and I think there will be plenty of opportunities for that in this park.

We still need to decide on a name for the park, so suggestions are welcome.

Council's park design team will be hanging out in the park tomorrow morning (27 July) from 9am to 11am to share the design and answer questions from locals. Stop by if you'd like to ask any questions...