Climate change will kill millions: Time for a general strike? 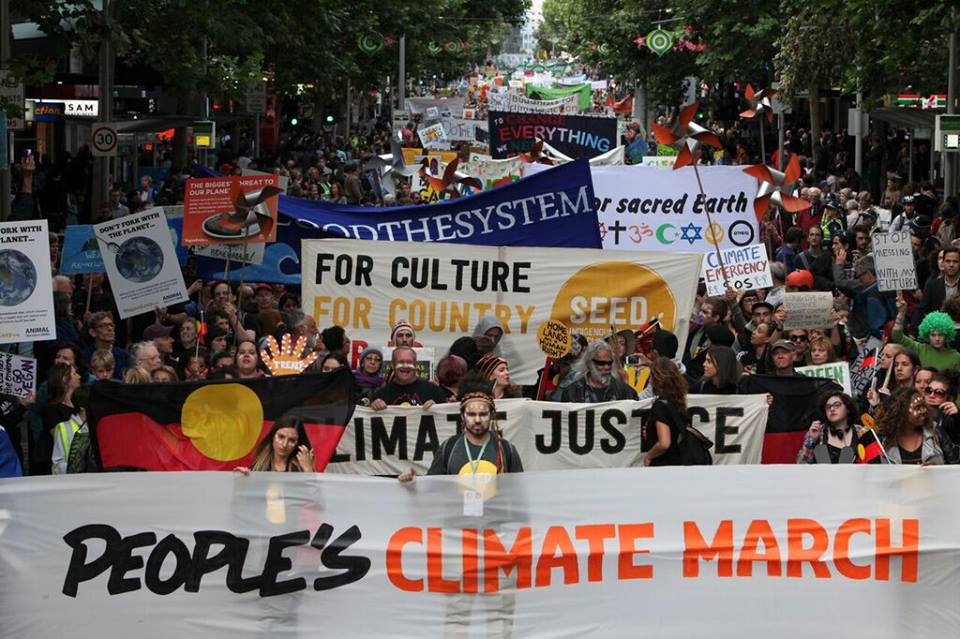 Let’s start with some hard truths. With a few notable exceptions, the Australian movement for action on climate change has struggled to achieve big tangible wins in recent years. We’ve had a few isolated victories, but even if Labor wins the next federal election and the Liberal Party’s position reverts closer to where it was under John Howard, the likely policy shifts aren’t going to come close to what’s needed unless there’s a strong push from civil society.

Here in Queensland, a Labor state government (where Labor’s left faction already controls more votes than the right faction) is still allowing the Adani coal mine to proceed, potentially opening the door to further new coal mines in the Galilee basin. If these mines go ahead, the burning of the coal they produce will lead to the flooding of coastal cities around the world, the desertification of thousands of hectares of farmland and forest, and more intense bushfires and cyclones.

In defiance of public opinion and basic common sense, the Queensland Labor government is prioritising the financial interests of the mining industry ahead of the safety and security of literally billions of people around the globe. The various forms of pressure that environmentalists have been applying to Labor (both through internal and external channels) don’t appear to have had much impact.

So for those of us who don’t want our grandchildren growing up in some kind of dystopian combination of Water World and Mad Max: Fury Road, what effective courses of action are left available to us?

Here in Queensland, anti-coal campaigners have used a variety of tactics to apply pressure on the political establishment, from peaceful public rallies to locking on to mining equipment. But even a rally of several thousand people isn’t enough to counteract the undemocratic influence that mining lobbyists are exerting over senior Labor ministers. While non-disruptive rallies and marches can help energise and inspire campaigners and draw attention to an issue, they do not directly challenge the underlying logic of capitalism, and are too easy for politicians to ignore. Even the protests against the Iraq War, which saw around six hundred thousand Australians take to the streets, didn’t change John Howard’s mind (if the following Monday, all those people had refused to show up for work, it might have been another matter).

Lock-ons and other arrestable actions do directly hurt the profits of the target companies, but when only a very small proportion of the community are willing to risk arrest, such tactics can’t easily be scaled up to have a big enough impact on political decision-makers, and the costs of fines and legal fees start to take their toll on a movement over time.

The Leard State Forest Blockade against the Maules Creek mine down in NSW was one of the largest civil disobedience actions in Australian history, involving thousands of protesters and hundreds of arrests. The campaign had a range of positive outcomes and flow-on effects, but sadly, the mine eventually went ahead.

So we need to recognise that while both protest marches and lock-ons have their uses, it’s well past time we started exploring other methods of expressing dissent and pressuring the government. We need tactics that large numbers of people can realistically participate in at minimal personal cost, which also directly challenge the power of the state and the profits of the corporate sector.

Organised labour strikes have become more difficult in recent decades. Legislative changes first initiated by Prime Minister Bob Hawke in the 1980s have largely neutered traditional trade unions and made most kinds of strike action illegal. Automation and overseas outsourcing threaten many industries, while more and more of us are casual workers with little to no job security.

But that doesn’t mean striking is no longer a viable tactic. We may not all work together in large factories or worksites anymore, but that doesn’t mean we can’t coordinate our actions across different industries and workplaces. And the fact that large strikes are somewhat rarer than they used to be actually means that if enough of us did get our act together to organise one, the impact upon our political leaders would be more significant.

So what might a general strike against the Adani coal mine look like in practice? I don’t pretend to have detailed answers to this, but basically it would mean as many people as possible taking a day off work. Some workers would simply call in sick. Others would take a day of paid holiday leave, or perhaps just unpaid leave. Some of us might not be able to skip work for one reason or another, but could perhaps still donate a portion of our day’s wages to support the strike. Those of us who are stuck in work for the dole programs should definitely call in sick.

If you do have a job, think about your workplace, and how it can throw a spanner in the works when just one or two people call in sick unexpectedly. Now imagine if as many as 1 in 5 or even 1 in 4 staff members all stayed home at the same time… from every workplace in the city. The ripples throughout society would be significant. Some businesses would simply have to shut their doors and give everyone a day off.

I’m confident that if even half the people who care about climate change all stayed home from work on the same day, our politicians would have no choice but to sit up and take notice. The recent school student strikes got a lot of attention, so why shouldn’t the adults join in?

What I’m now starting to wonder is whether we might have an even bigger impact if we all agreed that on the day of the climate strike, we also refused to engage in any kind of for-profit commercial transaction? Don’t go to the shops. Don’t buy anything online. Don’t even fill up your petrol tank. If your rent’s due that date, pause the automatic transfer and pay it a day later (fun fact: late rent payment doesn’t even technically count as a breach of your lease conditions). Instead, take a day off and spend it with family and friends. Sleep in. Go to the park. Go for a swim. Read a book. Cook a proper meal.

Major party politicians have spent a long time arguing (wrongly) that supporting the coal industry is good for the economy. Maybe it’s time to force them to recognise that the opposite is true. A general strike might seem a drastic step to some, but it’s an entirely proportionate response to the danger and devastation of runaway climate change.

I know other activists around Australia are also starting to talk about climate change-related strikes in the lead-up to the next federal election. I think the sooner we pick dates and organise such actions, the better. Waiting until March or April to start putting this kind of pressure on Labor and the Liberals will probably be too late for them to change their policy positions prior to election day. But if we start a little sooner, we could help make this into the key election issue that it ought to be.

And if they don’t change their policies, we can keep striking on a monthly basis until they have no choice, or they’re voted out of office. Heck, maybe this would be a good way to finally achieve a four-day work week.

I don’t pretend to have this all worked out, or that such a tactic would definitely succeed. But it’s clear that climate activists need to start trialling and experimenting with a more diverse range of actions. Although they’re fun and energising, climate change rallies and marches are little more than empty rituals if they don’t lead to other kinds of action. And convincing people to take a day off work might actually be a lot easier than convincing people to give up their Saturday morning marching in the hot sun.

20 September anyone? I wouldn’t mind a long weekend at the beach.