Here’s what they’re spending money on:
- Roughly $200 000 on a large new toilet block (six cubicles including 2 wheelchair accessible)
- About $400 000 fixing up drainage issues and patching the internal roadway
- About $100 000 converting the beach volleyball courts into a flat gravel area, which will be fenced off from the public and will stay within the Souths Leagues Club lease boundaries
- About $1.3 million removing and reshaping some of the mounds around the edge of the rugby field, planting new trees and opening up new useable green space (particularly the new circular lawn at the Jane St/Montague Rd end)
- I’ve also allocated $150 000 from my local park upgrades budget to partly cover costs of a small skate facility on the Montague Rd side (this is marked as the ‘multiuse games area’ on their diagram) and I’m trying to convince the council to chip in the rest. 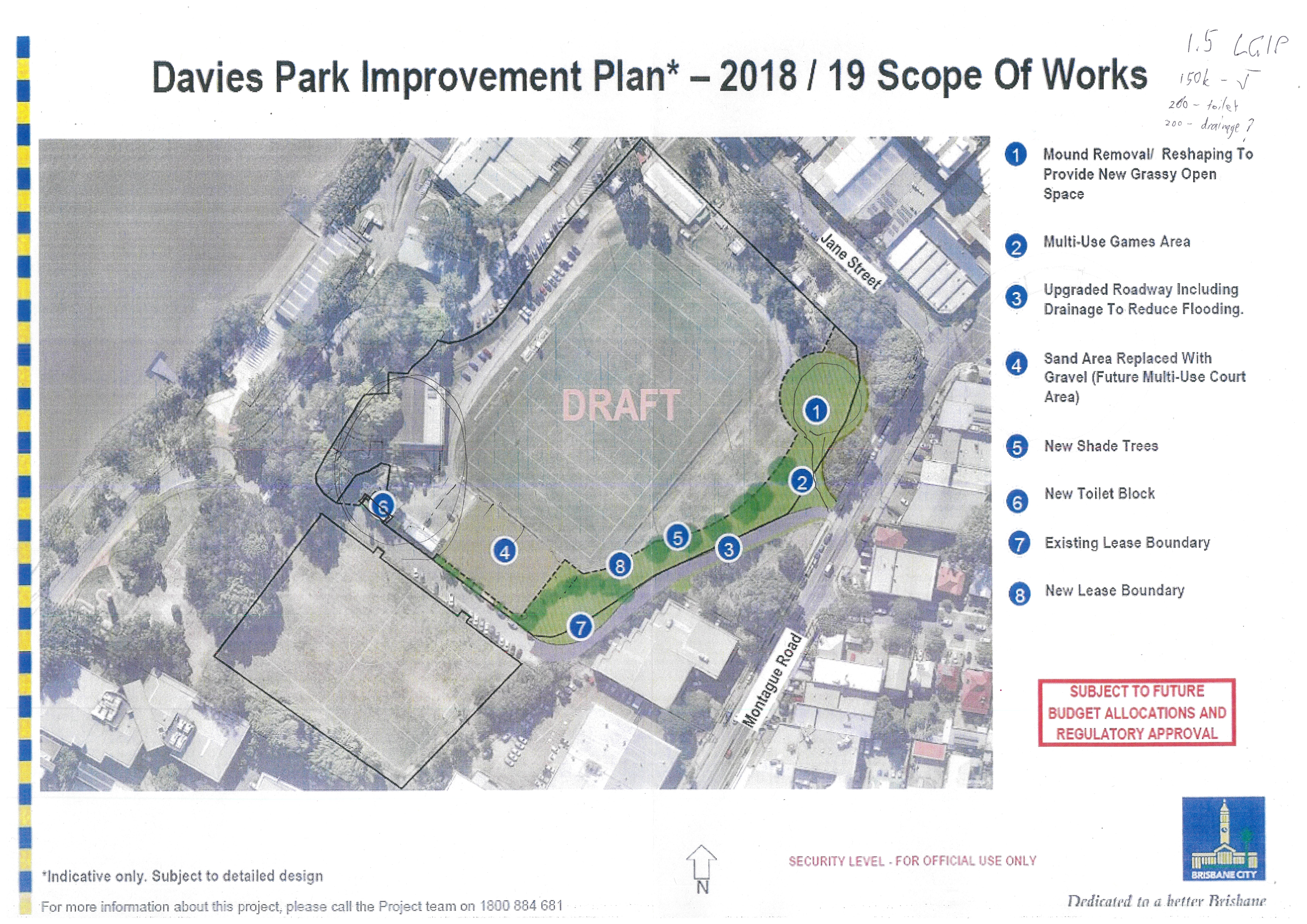 The council conducted a small amount of ‘consultation’ into public priorities for upgrading the park earlier this year, you can read the comments I made about the proposed plans on my Facebook page earlier this year, the draft design concept plans that were released in July 2018 can be viewed here. They received strong feedback that residents wanted more open green space and not too much concrete, which is why they have prioritised reshaping the mounds along the Montague Rd side to free up more land. Relocating the mounds is so expensive because they are full of old contaminated material (various heavy metals, old rubbish, perhaps even rusted car bodies from when Davies Park was used as a speedcar track in the 1930s).

My impression is that the forms of outreach and consultation used by the council may have tended to more heavily favour the views of older residents. From what I’ve heard in the local area, there’s strong demand from a lot of people for both a multiuse court and a small skate facility in Davies Park, but council is saying that this did not come through very strongly in their ‘official’ consultation.

Happily, it looks like the council has at least heard the community's strong feedback regarding the earlier proposal to relocate Jane St Community Garden. Neither I nor the majority of local residents wanted the garden moved, and it seems like the council has backed away from that plan. I'm very pleased with this small positive outcome and I will continue to support and be guided by the wishes of the Jane St Community Garden volunteers.

In general, I’m a bit disappointed with what the council is proposing. Fixing the drainage and relocating the mounds are important first steps, and it would be possible to then put a lot more money into the park to deliver more features. But unlike other major park projects (e.g. Hanlon Park), the LNP have not clearly committed to any more funding in future years beyond the $2 million announced so far. So my big concern is that this is all they’ll do.

Crucially, they have not committed to funding/installing:
- lighting through the park
- new pathways (e.g. a circular pathway around the proposed open lawn at the eastern corner)
- a full-sized multiuse court for basketball, netball, indoor soccer etc (as was floated in their initial consultation)
- Any kind of nature play/playground area
- BBQs or picnic seating
- New stairs/ramp leading up the slope from Riverside Drive to connect to the ring road
- Partial funding for the skate park
They have also ruled out including a shower facility in the toilet block, despite my repeated requests.

As a result of outsourcing to the private sector, the work council is proposing for Davies Park is costing way more than I consider reasonable. But if indeed those are the unavoidable costs, the council is simply going to have to commit more money to this park so we can get some serious improvements.

I’m particularly perplexed by the council’s proposal to convert the volleyball courts to a flat gravel surface on the vague promise that they will install new basketball courts/multiuse courts there in the future. Unless the LNP is willing to publicly commit to funding a multicourt here in the next financial year, we can have no faith or certainty that it will happen.

As a result, all that is going to happen for certain is that the BCC is spending up to $100 000 converting the beach volleyball courts to a flat gravel surface, which will most likely be used by Souths Leagues Club for parking. Rather than improving sport and recreation facilities in Davies Park, council’s current proposals are actually reducing them.

I’ve made an offer to BCC to put more funding from my local park upgrades budget into a small skate park on the Montague Rd side of the park if they’ll chip in some of the money, but I haven’t heard back yet. (In case you’re wondering, I can’t use my park upgrades budget for work on the beach volleyball court area, because that area falls within the boundary of the Souths Rugby League Club)

If you agree that council should not be spending $100 000 converting the beach volleyball courts to a fenced gravel carpark, and would prefer to see other kinds of park upgrades, can you please send an email to [email protected] and [email protected] and CC my office at [email protected]. Tell them you support planting more trees and creating more green space, but that we also need a multicourt, a skate facility and perhaps some kind of play area for smaller kids.

If this is all the work they intend to do for the 2018/19 financial year, we need to demand a clear public commitment from the Lord Mayor that they will spend more money on this park in the following financial year so we actually get some new facilities.