Why is the Queensland Government Prioritizing Another Footbridge at South Bank?

There’s been a bit of talk about bridges lately, after UQ released a draft masterplan proposing two possible options for green bridges between West End and St Lucia. Option 1 is a bridge between Orleigh Park and Guyatt Park, while Option 2 is from the southern end of Boundary Street, directly to the UQ St Lucia Campus. I’ll be getting a detailed briefing about this from UQ’s Chief Operating Officer and the Planning Manager in a few days. What’s clear to me is that any decisions about where we locate new bridges and what modes of transport we allow on them must be evidence-based, must look at the needs of the wider transport network, and must give local residents meaningful control and input at all stages of the process. It’s also important that if there is to be any loss whatsoever of public green space, that this is offset by acquiring additional land for new green space of similar quality and useability in the immediate vicinity.

Deputy Premier Jackie Trad has recently sent out a lot of communication to West End residents stating that she is strongly opposed to a bridge connecting to Orleigh Park. This has given some residents the false impression that a bridge disrupting the open vistas in the middle of Orleigh Park is a likely or imminent risk. In fact, at the city council level, the Greens, Labor and the LNP have all already signalled opposition to whacking a bridge in the middle of the two council-owned parks. So this flurry of communication about needing to protect Orleigh Park seems to be unnecessarily distracting from attempts to hold a more meaningful discussion about specific locations.

It’s pretty obvious to a lot of people (myself included) that a bicycle and pedestrian bridge connecting St Lucia to West End wouldn’t be such a bad idea. The Option 2 proposal mentioned in UQ’s Masterplan – from Boundary Street directly to the UQ Campus – is perhaps preferable. The main downside is that the southern end of Boundary Street is quite hilly, which might discourage some cyclists and pedestrians.

It’s also possible to connect a bridge from the eastern edge of Orleigh Park (near the Hoogley Street roundabout and the West End Ferry Terminal) to the northern end of Laurence Street in St Lucia. This would provide decent connectivity to the uni, while avoiding direct disruption to these two valuable inner-city green spaces.

Instead of, or in addition to, a bridge, BCC and the State Government could also look at co-funding a riverwalk to connect Orleigh Park to Dutton Park and the existing UQ Green Bridge, giving cyclists and pedestrians a flat route along the river that avoids the need to climb Highgate Hill.

At the same time though, I believe we need to continue pushing for a pedestrian and cyclist bridge connecting the emerging high-density precinct around Montague Road to central Toowong. A bridge landing somewhere between Ferry Road and Forbes Street in West End and over to the former ABC site near Archer Street in Toowong would provide a direct cycling route between the inner-south side and inner-western suburbs like Taringa and Indooroopilly. It would give Montague Road apartment residents a direct walk to the Toowong train station and shops, and would give Toowong residents better access through to work and recreation opportunities in West End and South Bank. This is probably a higher priority and of broader public benefit than a bridge directly to the UQ Campus.

Of course right now, the bridge that everyone should be talking about more is the proposed footbridge between South Bank and Queens Wharf in the city. With support from the Queensland Government, the Queens Wharf Mega-Casino developers have offered to build a footbridge from the South Bank riverwalk (near the ferris wheel) that would connect directly up to the casino gaming floor. This bridge serves very little useful purpose from a transport network perspective. There are many other parts of the Brisbane CBD that would benefit from additional footbridges (such as from Kangaroo Point to Eagle Street), and we also need a bus bridge somewhere around Hawthorne or Bulimba, but placing a footbridge so close to the existing Victoria Bridge seems like a waste of money and a missed opportunity.

Bizarrely, the casino developers and the State Government say this bridge won’t be open to cyclists, because rather than connecting from one riverbank to the other, it will slope up from South Bank to a higher level of the casino building.

The riverfront stretch of South Bank near the ferris wheel provides excellent unobstructed views of the CBD and the river. This is one of the prime viewing locations for big events like Riverfire and a favourite spot for tourists and locals more generally. It would be a shame to obstruct this open stretch of riverfront by whacking an unnecessary bridge in the middle of it.

I would be interested to hear the Deputy Premier’s perspective on why she supports this bridge to the casino, which is very close to other bridges, won’t be open to cyclists, and may well detract from the amenity of the South Bank riverfront. I would also like to hear more details from the Deputy Premier in her capacity both as Minister for Transport and as Minister for Infrastructure and Planning as to what bridge options she would support to improve connectivity between West End and Toowong/St Lucia. 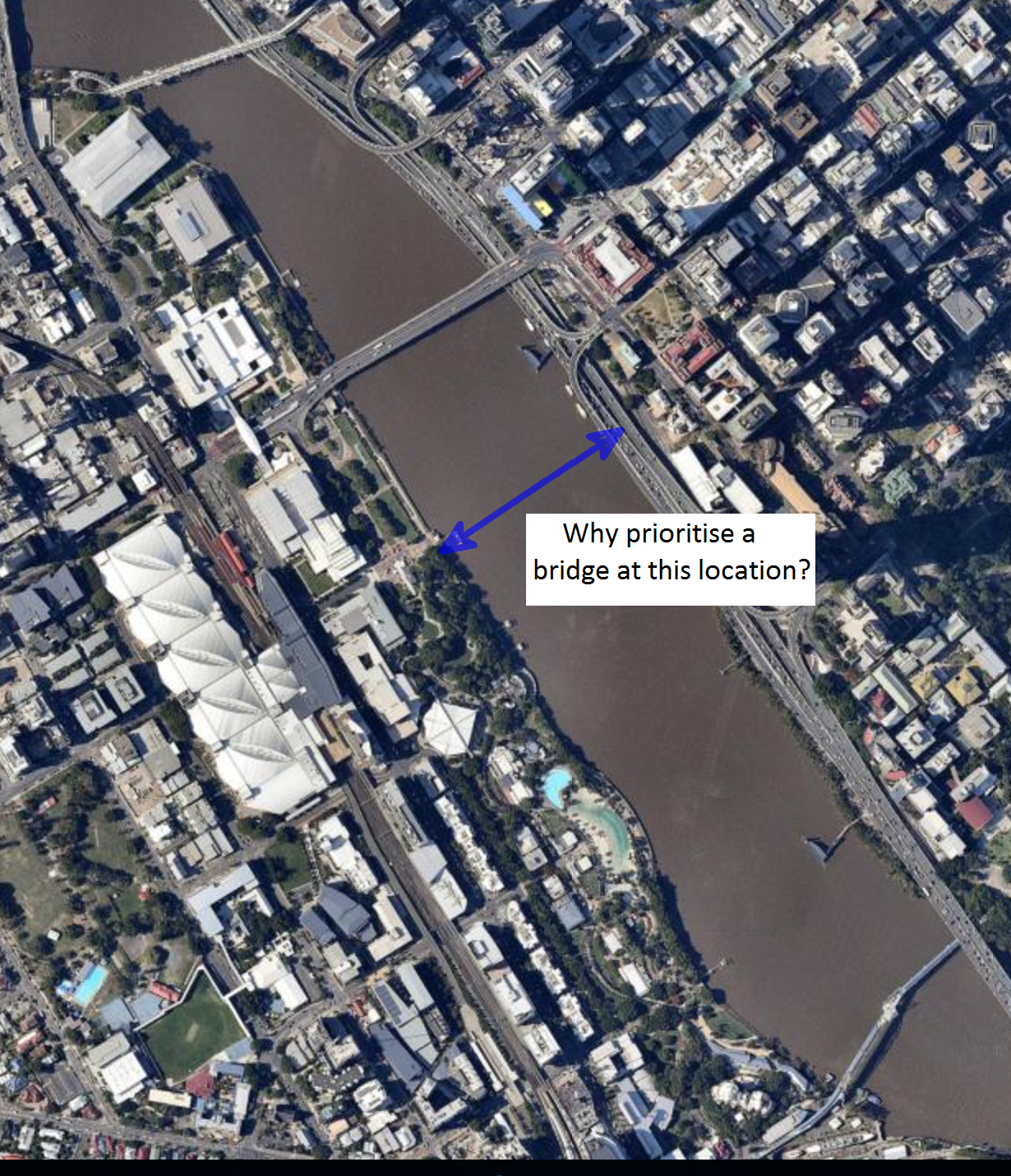