Recently I organised a bunch of residents in West End to paint rainbows on a footpath. I thought it might be useful for some people if I explained the legal status of these kinds of projects and the easiest way to go about getting approval from council for your own project. Getting a permit is sometimes worth the trouble as it significantly reduces the chance of council workers removing the artwork down the track. This info is current as of September 2017. 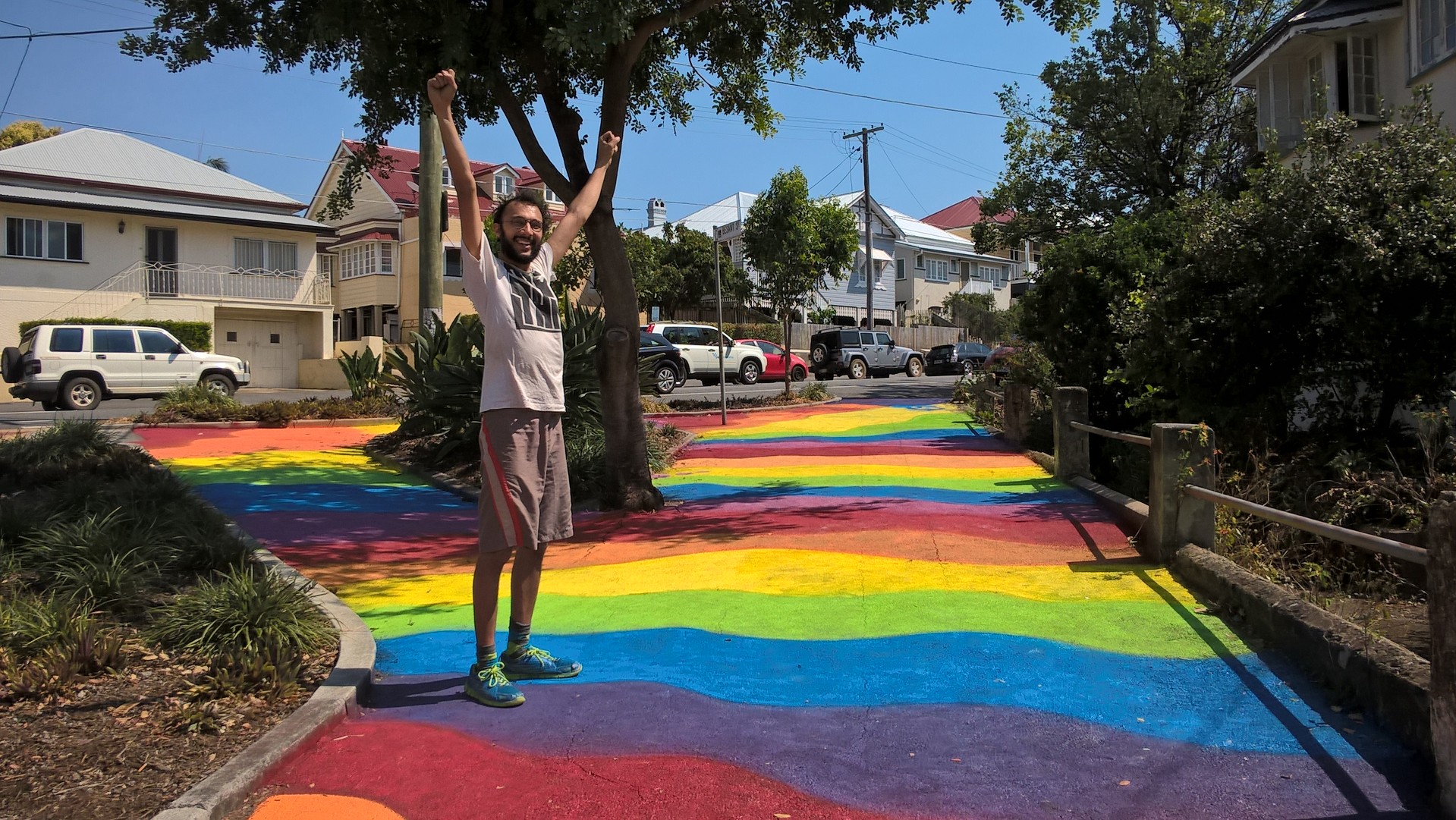 The first point to understand is that the council doesn't really have a proper formalised process for dealing with small-scale community art projects (this might change in the future). There's a Street Art team within BCC's 'City Projects' department that coordinates larger-scale public art projects, and if you call up the council's general hotline with a proposal for a project, they might refer you to this team, but they don't really have the framework or autonomy to support and approve minor projects like the rainbow footpaths we did in West End.

A better approach is to put in an application to work on council property through the Compliance and Regulatory Services branch of council. They will then consult with the Asset Services section of council (these are the guys who actually maintain the footpaths). Get your local councillor to help you if you need some guidance. It might be best to email them up front to let them know you're applying for an art project and ask if you can meet with them to explain the concept. For my project, I had to submit a form called 'Application/Notice to Work on Council Property' which is the form you have to fill out when you're installing a new driveway or connecting a pipe to a stormwater drain etc. The online and PDF forms are available via this link. I just wrote 'Community Art Project' in the 'Purpose of Activity' field and that seemed to be fine. If you're doing the project with the support of your local councillor, you shouldn't need public liability insurance.

Along with the Application/Notice to Work on Council Property form, I also included a rough concept design showing what the artwork would look like, and an aerial map showing the area I intended to paint (just draw some lines on Satellite View - it doesn't have to be too accurate or specific).

Other things to keep in mind to make sure you get approved are that:

- You agree to not use paints that are likely to cause a slipping hazard
- You do some basic consultation to make sure none of the immediate neighbours have any objections (just doorknock or drop a flyer in people's letterboxes with an image of the proposed artwork and ask them to get in touch with you if they have concerns... if an immediately neighbouring property is a posh new apartment block, try going through the body corporate or ask your councillor to help you contact them)
- You won't be completely blocking off a busy footpath (otherwise you have to go through a whole additional application process for a 'temporary footpath closure' involving signage and paid traffic controllers, which is not worth the hassle)

Try to minimise disruption for pedestrians

Particularly in the inner-city, a lot of pedestrians are sick of encountering blocked off footpaths due to construction work, so if you want to keep the community (and the council) on side, plan your project so you don't end up with a situation where people in wheelchairs can't get past.

For our project, I emphasised in an email which I sent along with the application that it was a broad footpath and we would only paint one stretch at a time, meaning that people in wheelchairs/with prams would still be able to use one side of the footpath while we were painting the other half. You can also tell council that you will use traffic markers to delineate areas with wet paint and that volunteer 'traffic controllers' will help guide pedestrians through the area. (In practice, you don't have to be too obsessive about this and can just manage pedestrians informally, but the council will want to see that you're at least thinking about the issue so they can tick their box)

Other conditions that the council might include in the approval are that you have to leave a 1-metre clearance from driveways (this seems unnecessary to me, but hardly worth arguing about) and that you're not allowed to paint the kerb ramps at intersections (the sloped bits that let wheelchairs/prams etc cross the road).

Get your local councillor to pay for it

The fee for this permit is $143, but your local councillor should be able to get council to waive the fee, or they can pay it for you (council routinely waives fees for non-profit entities, which arguably includes a community art project). Each council ward office has an annual community grants budget of $55 000... if you have a cool project in mind that will add to the amenity of your neighbourhood, at a minimum you should ask your local councillor to cover the cost of paint and the application fee.

If your councillor is advocating on your behalf, you might be able to get approval sorted within five business days, whereas otherwise it could take two or three weeks.

Can I do this without the hassle of applying for a permit?

Short answer: Yes. But, you might get in trouble and there's a much higher chance it will get removed.

Outside of busy commercial precincts and tourist destinations, Brisbane City Council's graffiti removal team are largely complaints-driven i.e. they won't go out patrolling for graffiti on residential back-streets unless someone calls up the council to make a complaint. So it's entirely possible that you could paint the footpath outside your house and it could remain there for years and years as long as none of your neighbours have a problem with it. If your artwork is more decorative and subtle it's unlikely to attract complaints. But don't let that deter you from producing more thought-provoking work.

Footpaths along public roads are council property (or State Government property on some bridges and alongside highways), so painting anything on them without prior approval is technically vandalism and you can be charged with a range of offences. However, if they don't catch you in the act, and the aren't isn't likely to offend more conservative residents, they probably won't bother trying to track you down. (Note: If you post a photo on social media saying "Check out what I painted on the footpath outside my house!" that can be used as evidence against you if the police or council are in a bad mood and really want to charge you)

What about artwork on the actual roadway?

The current BCC administration is paranoid about any kind of artwork on the road itself. They're worried that art might confuse or distract drivers and cause an accident. They won't even let you turn a white zebra crossing into a rainbow-coloured one because this wouldn't comply with the State Government's 'Manual of Uniform Traffic Control Devices'. Many other cities around the world have recognised that art on roadways is actually a great way to slow down traffic and make streets more pedestrian-friendly, but Brisbane's current council is extremely conservative in this respect. If you want to install an artwork on the road itself, don't bother asking permission because it will be refused. You can expect that council will probably clean it off within a few days of becoming aware of it.

So that's where things stand at the moment. This is an evolving space and if more people start trying to organise their own community art projects on footpaths etc, Brisbane City Council might initiate a more specific process. Their main 'challenge' is that no particular bureaucrat really wants to be responsible for censoring/vetting artwork, so getting your local councillor on board is probably worth the trouble. If you have any more questions or need a bit of help getting support for your project, feel free to contact my office on 3403 2165 or email [email protected] and we'll help you out as best we can. My office is definitely happy to pay for paint for public art projects taking place within the Gabba Ward (suburbs of West End, Highgate Hill, East Brisbane, South Brisbane, Woolloongabba, Dutton Park and Kangaroo Point).

Get out there and start painting.