Free Off-Peak Buses and Ferries for Everyone!

We believe we can and should have a city where getting around is cheap, convenient and sustainable for everyone.

We’re working towards a world where everyone can afford to get where they need to without getting stuck in bumper-to-bumper traffic, or having to wait ages for a bus that never shows up.

When a job-seeker is trying to get to the next job interview, a family is deciding where to go for a weekend outing, a student is heading from school to sports practice, or a shift-worker is trying to get home late at night, the cost of a bus fare should not be a barrier or disincentive.

Traffic congestion is worsening, while all levels of government waste hundreds of millions of dollars each year widening roads and intersections.

Many existing peak-hour bus services are already over capacity, while many off-peak services are well below capacity.

Continually widening roads is not fixing congestion. We need to shift more people onto public transport, but Brisbane residents report that cost, reliability, and network coverage are three of the biggest barriers to using public transport more often.

To improve network coverage, we need the State Government to allocate more funding towards new routes and services, but this is harder to justify while existing services are under-capacity.

That's why we want council to introduce a two-year trial of free off-peak trips on all BCC buses, CityCats and ferries, and dedicated peak-hour bus lanes for the most congested bus corridors.

All journeys on council buses, CityCats and ferries that start and finish within an off-peak period would be free for all travellers, and would not require passengers to hold (or swipe) a ticket or GoCard.

Journeys of less than 90 minutes that start in the off-peak period would be free for all travellers, even if the journey ends within the peak fare period.

We will also call on the State Government to trial free off-peak travel for trains at the same time.

Dedicated peak-hour bus lanes on congested corridors can be trialled at low cost to test what practical impact they have on bus patronage and journey times and the broader traffic network. Peak-hour bus lanes improve bus frequency and reliability by ensuring buses don't get held up in general traffic congestion.

We will give local residents a say as to which transport corridors get peak-hour bus lanes, rather than imposing top-down change without proper community consultation.

If you agree that we can and should improve public transport in this city, sign up here to support the campaign!.

Free off-peak travel for everyone would:

Public transport routes and fares are mainly controlled by the State Government, but Brisbane City Council has the flexibility to trial alternative approaches, as we’ve seen with its recent adoption of our proposal for free off-peak travel for seniors.

The Chair of Brisbane City Council’s Public and Active Transport Committee has reported that making off-peak bus, citycat and ferry journeys free would cost approximately $6.7 million per month - around $80 million per year - in lost fare revenue. With around 2 million residents able to use Brisbane's buses and ferries, that works out to an annual cost of only $40 per person to make off-peak trips free for everyone.

$6.7 million per month is a significant figure, but should be considered in comparison to the cost of some of BCC’s current unnecessary road projects. The extravagant and wasteful Lytton Road widening project is costing the public $115 million. These works have disturbed the community by eating into greenspace, forcing people out of their homes (with partial or full resumption of around 50 residential homes) and disrupting local businesses over several years. All of this will allegedly reduce travel time by around 50 seconds, on a 700-metre stretch of road with bottlenecks at both ends. A huge amount of resources has been poured into this section of one road, which will not benefit the communities of wider Brisbane. Imagine how much cleaner and more livable our city would be if we saved that $115 million and spent $80 million on free public transport instead! The same can be said of the Kingsford Smith Drive widening, which is costing close to $650 million. Instead of funding that one project, BCC could make off-peak buses and ferries free for eight years!

BCC’s Annual Plan and Budget advertises one of its key priorities as “Getting you home quicker and safer” by, “Investing more than $2 billion to reduce congestion and deliver more travel options [meaning] less time on the road and more time for what’s important.” Brisbane has seen 15 years of LNP dominated Council and many residents are failing to see the value for the millions of dollars that have been poured into their nominated “solutions”. BCC extols the virtues of their “90 congestion-busting projects” whilst Brisbane’s roads become more choked and polluted, with commutes to work getting longer and longer.

Brisbane City Council provides some very limited free services for select, inner-city areas such as the CityHopper Ferry, the Spring Hill Loop and the City Loop bus services. These precedents show that BCC already supports free public transport, but only for residents and visitors to the city centre. The operation of these services is an acknowledgement that free public transport can play an important role in adding value to Brisbane.

A recent move by BCC has seen off-peak bus travel become free for Seniors, although more complicated rules apply for CityCat services. BCC states that the subsidised travel, “will create more opportunities for older residents to move around the city and connect with family and friends.” However, this free travel has not been extended to younger residents on disability pensions who could benefit from similar advantages, or unemployed people who benefit greatly from taking free public transport to job interviews and appointments. BCC’s free city services and free travel for Seniors doesn’t significantly reduce congestion, as it doesn't target the demographics most likely to contribute to peak-hour traffic congestion by driving.

While the lost fare revenue is significant, making off-peak journeys free would save all levels of government - particularly council and the state government - money in other areas of the budget. Taking cars off the road and shifting more people onto public transport means less money spent on road widening and road maintenance (like the $650 million spent on the Kingsford Smith Drive widening and $115 million widening Lytton Rd). It also avoids the dramatic negative flow-on impacts of road-widening project construction on local businesses.

Shifting our transport network away from car dependence has further positive impacts (and cost savings) including reduced noise and air pollution, reduced harm and disruption from accidents, more efficient land use and higher quality of life for residents living along busy transport corridors.

Why just buses, ferries and CityCats? Why not trains too?

So if you want to take money away from road-widening projects to fund this, which specific road projects won't get funded?

That largely depends on the priorities of council's Transport Planning and Operations team. Each year, council officers make recommendations as to which road projects are their highest priorities and deliver best value for money, so if the overall budget for road corridor and intersection widening is reduced, the lowest value-for-money projects would probably be delayed.

Generally speaking, we support prioritising funding towards smaller, localised projects, such as pedestrian crossings, traffic calming and minor intersection upgrades, as these tend to deliver the greatest benefits to local residents' quality of life, whereas expensive mega-projects tend to cause more disruption to the surrounding community but do relatively little to reduce traffic congestion.

Why are you focussing on off-peak journeys when most people travel during peak periods?

Basically because it's the lowest hanging fruit. While many bus and ferry routes are crowded during peak periods, most off-peak services are operating well below capacity. Council is still paying the costs of running and maintaining these bus and ferry services, but most of the seats are empty.

You said this would cost around $80 million per year. Where does that figure come from?

This estimate comes from research by council officers via a formal question on notice to the council's Chair of Public and Active Transport, Deputy Mayor Krista Adams, and was provided in a Public and Active Transport committee meeting in September 2019. It's based on the revenue currently collected by Translink each month from off-peak bus, ferry and CityCat services, using a similar methodology to that which was used to calculate the cost of the free off-peak buses for seniors initiative, which has now been introduced and implemented by council.

You said you want to trial peak-hour bus lanes on major road corridors - which roads would you do this on?

That's up to Brisbane residents. We believe there is a strong case for peak-hour bus lanes on many of the major arterial roads heading in and out of the city centre, but we believe residents should have the final say as to where this is trialled. Some corridors, including parts of Kelvin Grove Rd, Gympie Rd and Waterworks Rd, already have peak-hour bus lanes or transit lanes. We want to use a mix of surveys, public meetings and community voting processes to let the people who actually use Brisbane's roads on a regular basis decide which corridors should give greater priority to public transport.

I never use the bus or ferry. Why should my taxes and rates fund a free service I won't use?

Making public transport cheaper and more reliable benefits everyone, regardless of how they travel. Traffic congestion has a broad range of negative economic impacts on society, driving up the cost of food and consumer goods as well as community services. Shifting more commuters from cars to buses frees up road space for people who have no alternative to driving, and particularly for delivery vehicles.

Reducing the number of cars on the road also improves air quality, reduces noise pollution and reduces fossil fuel emissions. It makes our streets safer for pedestrians and cyclists, and saves all levels of government hundreds of millions of dollars each year, which can instead be spent on other services and projects.

Is this financially sustainable?

We believe it is financially sustainable for Brisbane City Council to bear the cost of the decrease in ticket revenue for the duration of a two-year trial, after which time, if the trial proves successful, we believe the cost should be borne by the State Government.

Brisbane's current approach to transport and traffic planning is not financially sustainable, and both the State and Council are spending more and more money each year on maintaining and expanding the road network. Unless we drastically transform our approach to transport and shift more commuters onto public transport, neither BCC nor the Queensland Government can afford to continue with the current strategy.

We have to revolutionise our approach to transport in this city, and make public transport cheaper and more convenient, otherwise we'll all be stuck in bumper to bumper traffic. 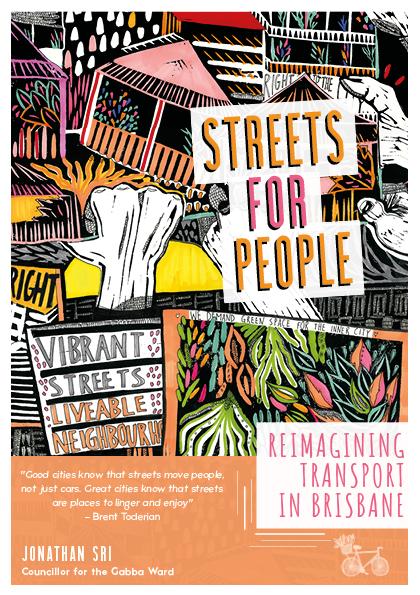 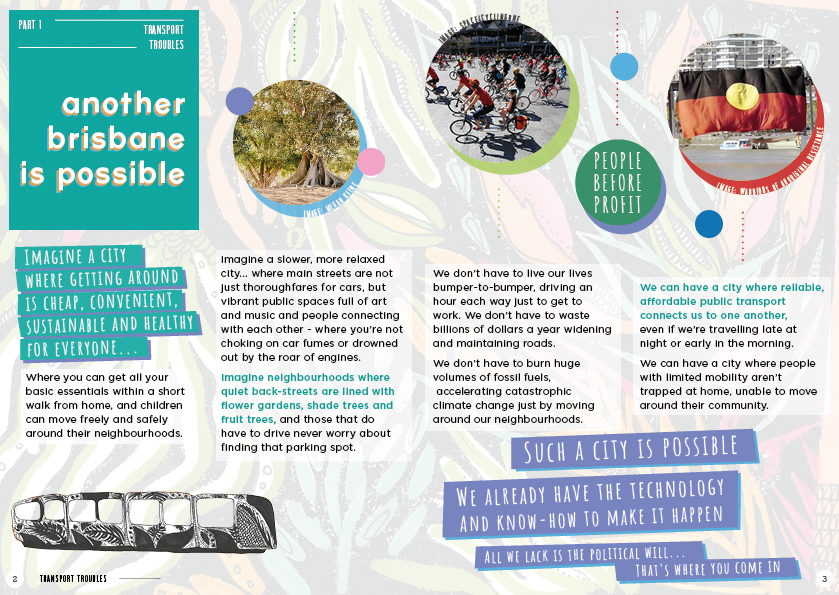 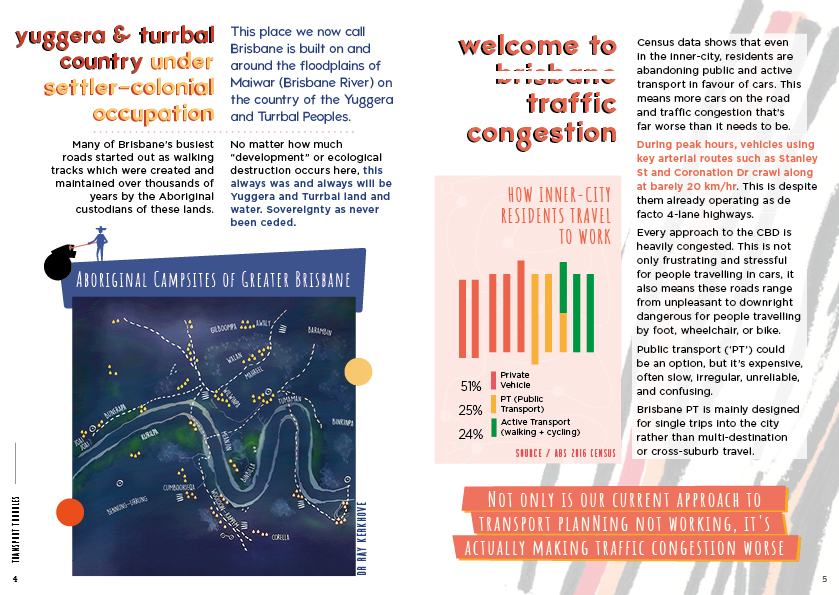 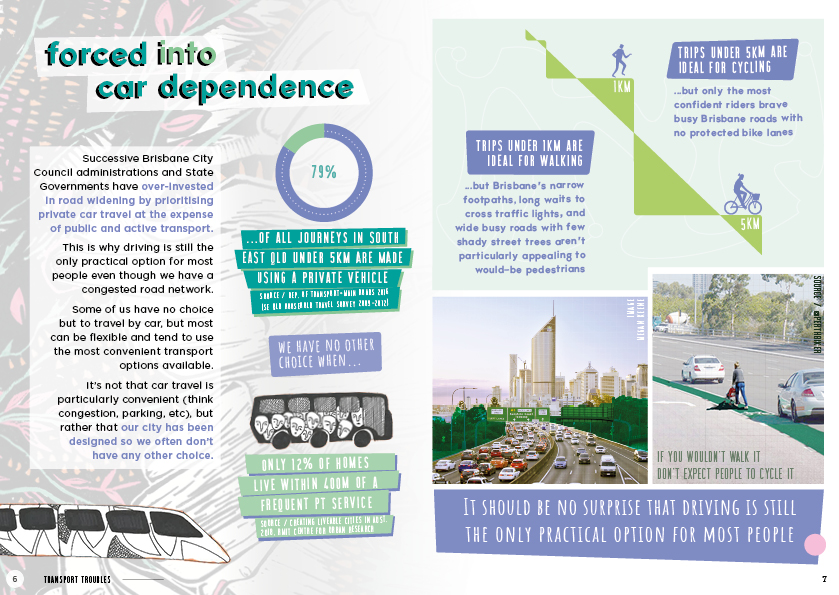 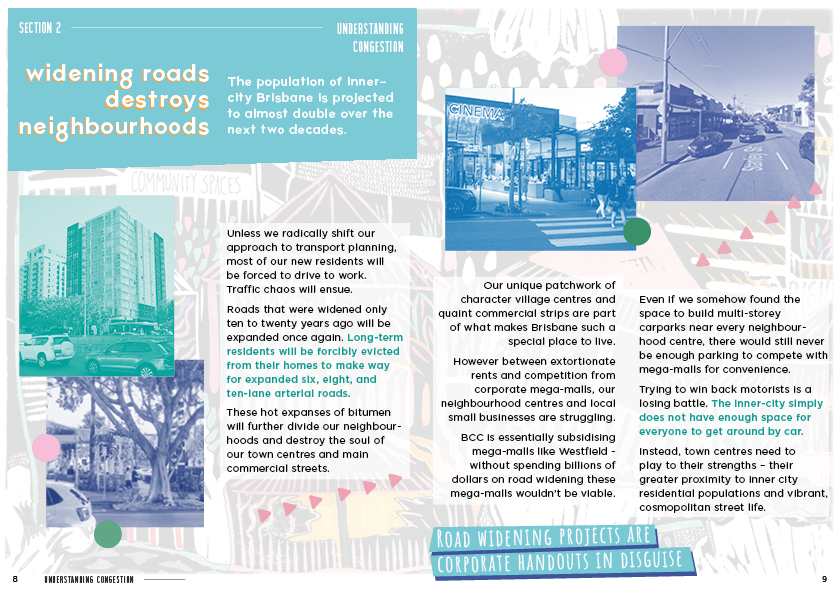 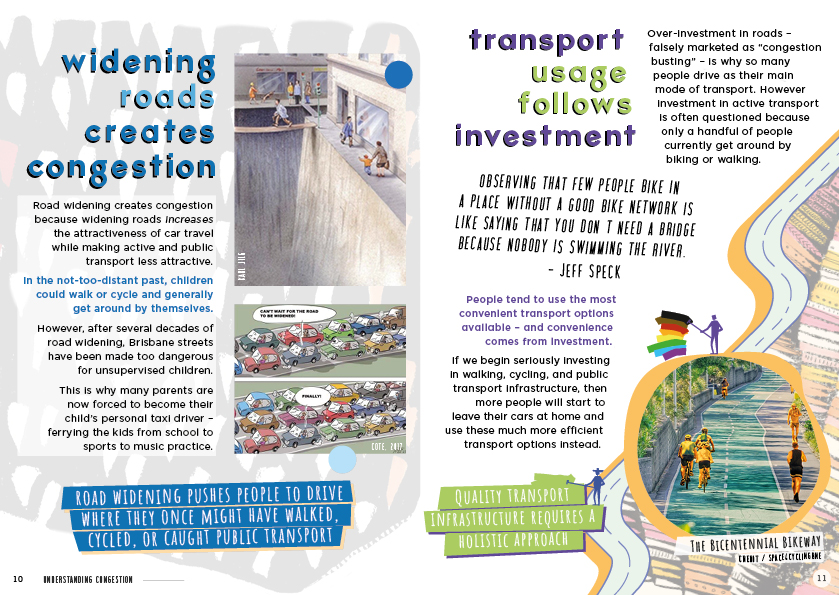 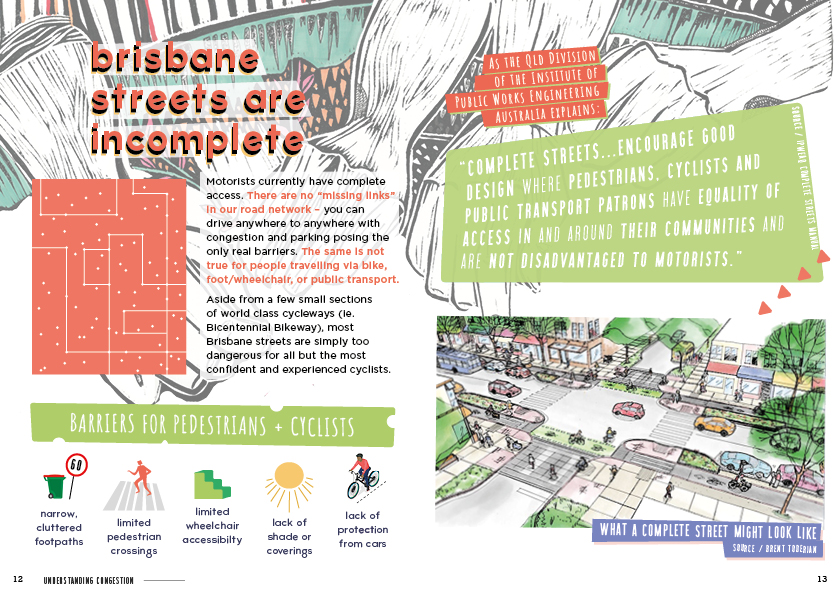 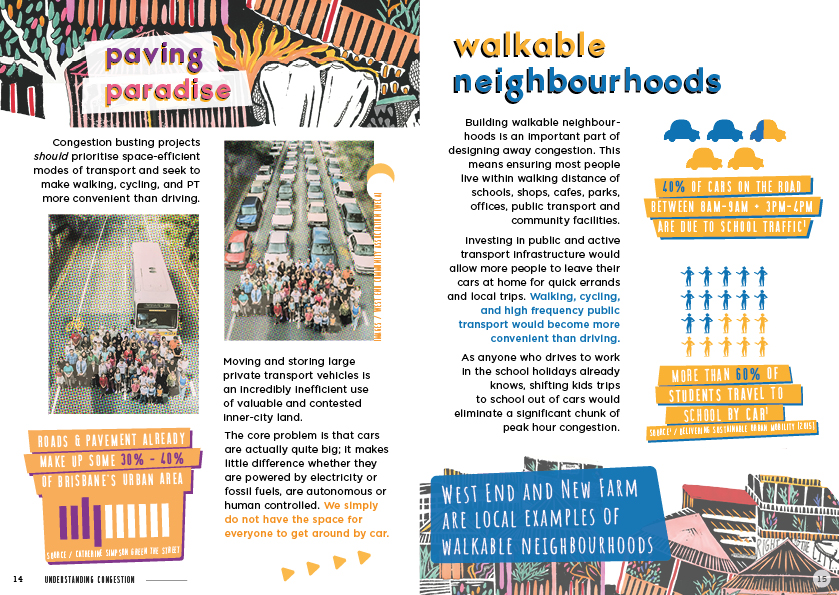 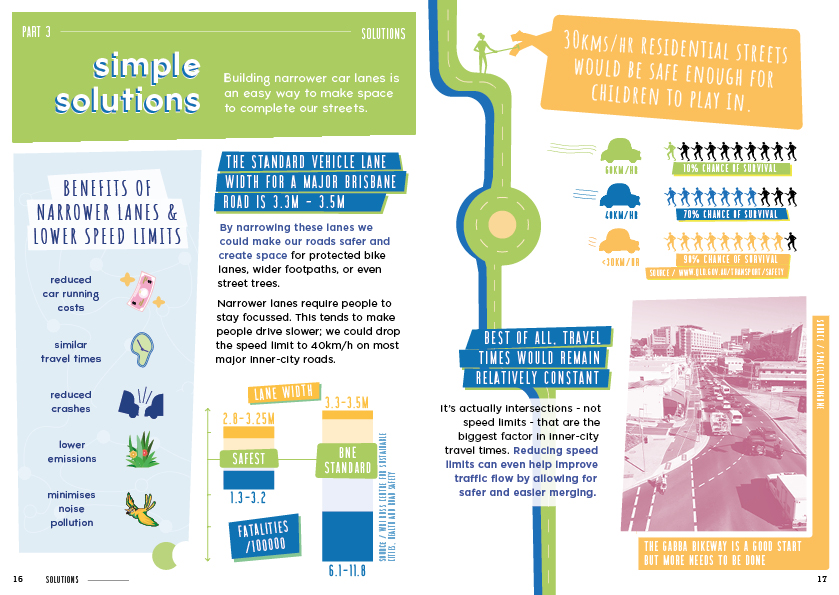 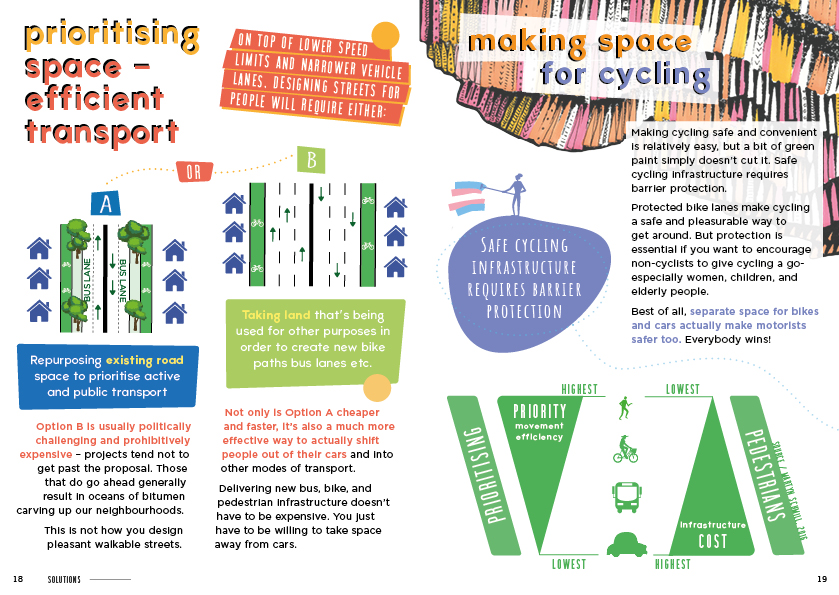 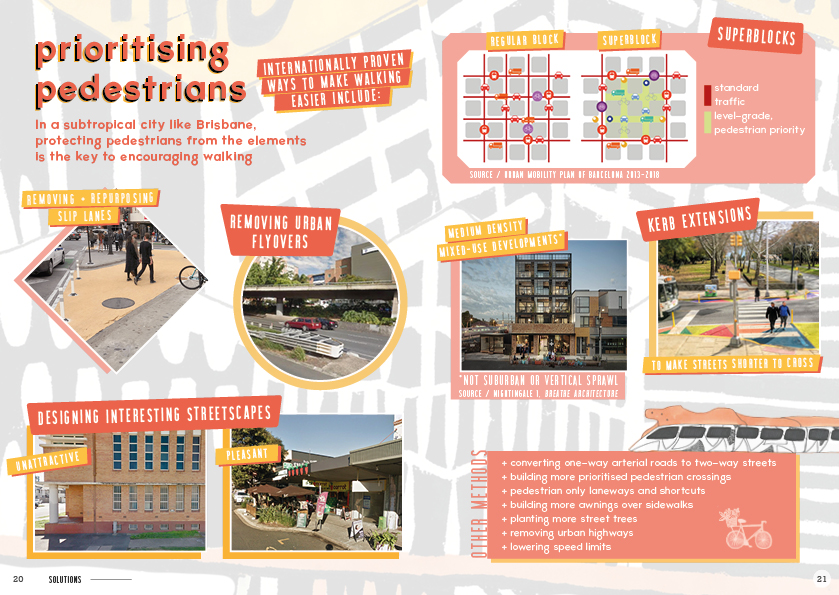 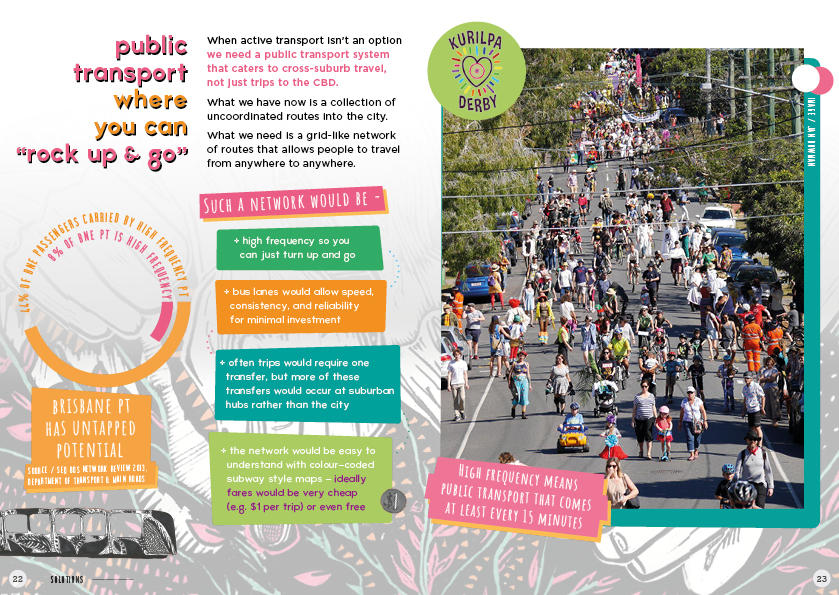 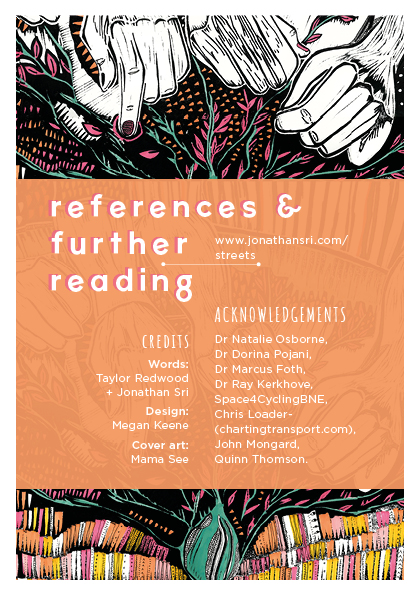