While bike lanes like this are common in many cities around the world, this is the first big barrier-separated bike lane project of its kind in Brisbane, and a big step forward for a council that has historically been reluctant to fund complex and challenging bike lane projects in inner-city Brisbane. It will be important for the council to receive lots of positive feedback on this project so that it has the confidence to fund other separated bike lanes in different parts of the city.

This project hopes to significantly improve cyclist safety on one of Brisbane’s most popular and most dangerous commuter cyclist routes. The proposed designs were released for public comment on Monday, 28 August, and can be found at this link.

Please do check out those designs and think carefully about what other improvements might be possible.

My main concerns with the proposed designs are:

However the project also creates a few other small opportunities to improve the neighbourhood that should please cyclists and non-cyclists alike.

Several stretches of Annerley and Stanley are somewhat hostile and uninviting for pedestrians. The close proximity of noisy, fast-moving traffic discourages footpath dining and undermines the potential to create an active streetscape.

If the community calls for it as part of council’s consultation process, some of the money allocated to this project could be put towards planting new trees and garden beds, fixing up footpaths, and creating new pocket parks in areas where there is very little green space.

The proposed designs include a closure of Merton Rd at the intersection with Stanley St and a partial closure of Gloucester St at the intersection with Annerley Rd. Both of these closures will create enough space for small pocket parks. These could become meeting places like the well-known fig tree and lizard statue at the corner of Russell St and Boundary St in West End, or they might be more densely-planted green retreats that provide a buffer between the main road and the side-street. Either way, they are positive opportunities to add a little more canopy cover and green space to a streetscape that is dominated by concrete and bitumen. It will be up to residents to advocate for these closures to be landscaped as green spaces, otherwise they may well end up as bare concrete like the partial closure at the intersection of Duke St and Vulture St near the Gabba stadium.

The Stanley-Ipswich intersection has reasonably high volumes of cyclists and pedestrians, but the current configuration of refuge islands, kerb ramps and crossing points means bikes and pedestrians sometimes get in each other’s way, particularly when crossing over to Logan Road. This should be addressed as part of this project, rather than delayed until later on.

The Dock St crossing at the intersection of Vulture St is obviously another major choke point for pedestrians and cyclists. I’m told that this intersection is being addressed by another council project in this same financial year. The proposed designs of the Woolloongabba Bikeway Project will direct many more cyclists across Dock St, so the pedestrian refuge islands will definitely need to be redesigned to accommodate this.

The project also includes a number of elements which will be controversial for some people, including:

- loss of a significant amount of street parking along Annerley Road

- relocation of the pedestrian crossing between Diana Plaza and Mater Hospital to the intersection of Annerley Rd and Catherine St.

If you’re pleased to see this project going ahead, giving council a bit of positive feedback is probably also a good idea. 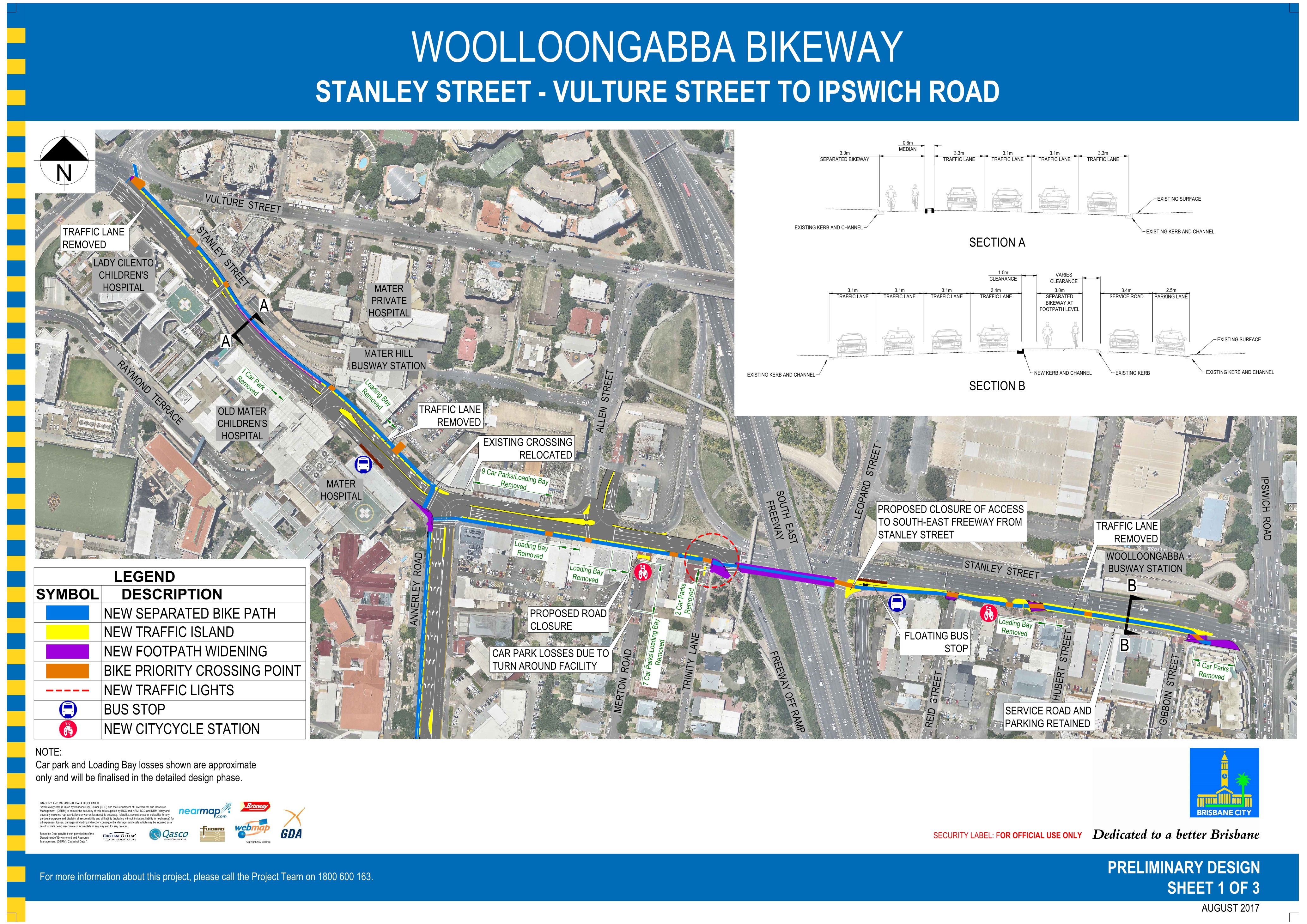