How can we sustainably accommodate a growing population?

The State Government’s South-East Queensland Regional Plan suggests Brisbane needs to build 188 000 dwellings over the next 25 years in order to cater for a population increase of 386 800 residents. This is obviously a pretty big number. The 188 000 dwellings figure is often used by LNP city councillors to justify why they are approving so many big new development projects. When I ask questions about whether all these new apartments are really necessary, the council's response is that the State Government has set the dwelling targets and they have no choice but to try to meet them.

I would argue that more government investment in regional towns could help spread this population growth around the State, encouraging more people to settle in rural communities that are currently experiencing workforce shortages and population decline. But even if you accept that a certain number of new residents simply must be housed in Brisbane, it’s worth recognising that the government’s 188 000-dwelling figure is based on the assumption that each dwelling will only hold an average of 2 residents, and does not appear to contemplate more efficient use of existing dwellings. So instead of focussing on how many standard dwellings we need, let’s talk about housing human beings instead.

The following paragraphs use some approximate figures and make a few broad assumptions, but my hope in writing this is that it will prompt further thinking and detailed research about what alternatives might be possible.

Right now, tens of thousands of homes in Brisbane are sitting empty long-term (some estimates put the number as high as 60 000 or 70 000). Unfortunately, some investors prefer to leave homes vacant rather than renting them out cheaply. When thousands of people are homeless, and over-development pressures are worsening, allowing so much housing to sit empty is not in the public interest.

A straightforward vacancy tax would encourage investors to rent out properties that are identified as long-term empty. Some investors would simply choose to pay the vacancy tax, and this revenue could fund local infrastructure. Others would sell their investment properties, giving first homebuyers a chance to own their own home. A broader-based investment property tax could have a similar impact. If a vacancy tax freed up even 20 000 homes across Brisbane for rent or purchase, this could house another 60 000 residents without anyone having to build a single new dwelling.

Although many of us have been socialised to lead individualistic lifestyles, and are losing the skills of cohabiting and sharing spaces, there are a lot of benefits to sharehousing or taking in boarders, particularly for demographics at risk of social isolation. A lot of older retirees have one or more spare bedrooms in their home. Providing incentives for some of these people to offer one of their spare bedrooms to a younger housemate would yield the twin benefits of providing affordable housing, and giving elderly people the emotional and practical support they need to remain living in their own homes. This homesharing approach has proven successful in a range of cities around the world (e.g. Melbourne, London, New York), and is preferable to building massive for-profit retirement villages that charge through the nose and cut elderly people off from the broader community.

There are a range of legislative and regulatory barriers that could easily be tweaked to make sharehousing more attractive both for renters and owners. While it’s true that household sizes have declined in recent years, this has been driven in part by housing designs that aren’t suitable for sharehousing. If we broaden our thinking about how we design and retrofit homes (including really simple stuff like having a separate toilet and bathroom) and what forms of property ownership we allow, sharehousing would be a lot more viable for more people. Brisbane City Council has given away millions of dollars in incentives to big developers to build new for-profit student accommodation. Much of this new student accommodation has been of poor quality, and will not be easy to adapt for other purposes if demand from international students ever decreases. There’s no reason the council couldn’t also offer various incentives to encourage renovating older properties to make them more suitable for sharehousing.

Census data suggests roughly three quarters of Australian homes have one or more spare bedrooms. There are currently about 465 000 dwellings in the Brisbane local government area. Around 70% of Brisbane dwellings have three or more bedrooms, but the average household size in 2016 was only 2.6 people, showing that even in a growing city like Brisbane, there are hundreds of thousands of empty bedrooms. Obviously a lot of people like their spare bedrooms and put them to other uses, but tens of thousands of Brisbane homes actually have two or even three spare rooms. And over the coming two decades, as households change and people move in and out of different kinds of properties, we could gradually make much better use of all that dwelling space.

It’s not inconceivable that by 2041 we could have housed an additional 150 000 residents via better sharehousing of existing homes, again without building a single new highrise tower.

Cohousing differs slightly from sharehousing, in that while households might share facilities like laundries, gardens and entertainment areas, each household is largely self-contained and has slightly more private space to itself.

There are a range of different cohousing models out there, from concepts like the Nightingale Apartments, where private apartments make more efficient use of space via shared laundries and rooftop gardens; to eco-village communes, where different households cook together, garden together and maybe even share responsibility for looking after each other’s kids. Cohousing models create stronger local communities, are more resilient in times of crisis, and can save money through shared ownership of assets like carshare schemes and collectively-owned solar power systems. 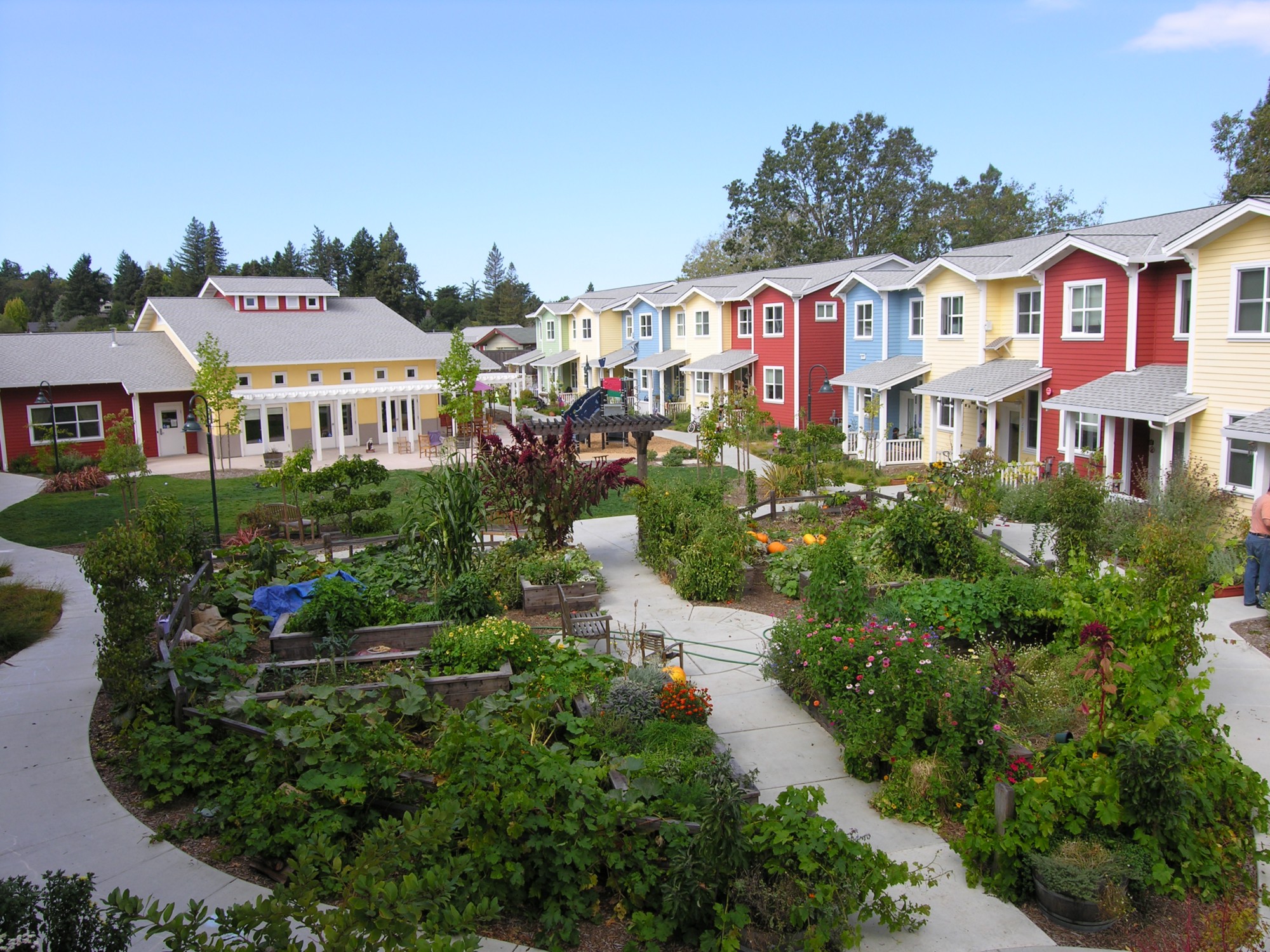 Cohousing tends to be much more space-efficient than other forms of housing. Nightingale-style apartments typically house 30 to 60 people in a block which is only four or five storeys tall on a block that’s only 15m x 50m. In contrast, this new ‘conventional’ highrise development proposed for Kangaroo Point is 16 storeys tall on a similar site footprint, but only includes 15 separate dwellings. If we were to rely purely on buildings like that to meet the State Government’s target of 188 000 new dwellings by 2045, we would need to find room for more than 12 000 of these towers across the city. Cohousing is definitely a better approach.

The humble granny flat is one of the simplest cohousing forms, but current laws and regulations make constructing granny flats and tiny homes in the backyards of existing properties very difficult, particularly if you wish to subdivide and sell the granny flat or rent it out to someone who isn’t related to you.

Apart from older inner-city suburbs, Brisbane homes have traditionally had quite large backyards. Some of these are used for gardening, trees and recreation, but a lot of backyard space is under-utilised.

There are currently about 270 000 detached private dwellings in Brisbane. Many property owners would prefer to leave their backyards as they are, but if even 1 in 5 of these properties found room in their backyard for an additional small-footprint dwelling like a granny flat, and each of these held an average of 1.5 residents (i.e. roughly half were for individuals and half were for couples) we could accommodate around 80 000 additional residents.

Greater support for tiny homes and granny flats would also yield the additional benefit of increasing density in extremely low-density sprawling suburbs, allowing for the more efficient provision of public transport and other services. Although some people might be concerned about slight losses to private green space in suburban backyards, this is clearly preferable to the ongoing conversion of farmland and bushland into sprawling residential developments. Converting a small proportion of private backyards towards housing means more land can be set aside for bushland reserve and larger public parks, and fewer highrises crowding the skyline.

While the figures I’ve quoted so far are rough and approximate, they are also conservative estimates. They assume that most households would continue to leave spare bedrooms empty, that most properties would not build a second dwelling in the backyard, and that most vacant properties would remain empty despite a new vacancy tax. What I hope the figures demonstrate is that there are many ways to accommodate a growing population, and that the State Government and Brisbane City Council have been too hasty in assuming that the need to accommodate an additional 386 000 residents inevitably means we have to build new highrises right across the city.

Rather than the 386 800 residents described in the State Government’s regional plan, we will actually only need to accommodate around 100 000 residents via wholly new development between now and 2041.

Medium-Density rather than Highrise

I take the view that encouraging more medium-density development is preferable to extremely dense highrises, and that this is where the majority of new housing supply should come from to cater for the anticipated additional 100 000 residents over the next 25 years.

The term ‘medium-density’ is ambiguous, and definitions vary widely. The State Government’s regional plan talks briefly about the importance of the ‘missing middle,’ referring to townhouses, terrace homes, flats and low-rise apartments of 2 to 6 storeys in height.

In contrast, highrise towers extend well above the natural treeline, and have a much more significant impact on a street, particularly in terms of blocking sunlight and creating a wind tunnel effect. They also tend to be much more disruptive to the surrounding neighbourhood during their lengthy construction periods, and place a far greater ongoing strain on local transport infrastructure.

While in some parts of Brisbane, there is an understandable aversion to the proliferation of townhouses and low-rise apartment developments, this is primarily due to the anticipated negative traffic congestion impacts, which can be addressed through greater funding and support for public transport and active transport. Personally, if it’s a choice between townhouses and highrises, I’ll take the townhouses.

The takeaway from all this is that we don't actually need to build anywhere near as many new dwellings in Brisbane as the State Government has suggested. Those new dwellings that we do need to build can take the form of granny flats in backyards and medium-density townhouses and apartments, rather than highrises.

For further reading and practical case studies on how we can retrofit suburban neighbourhoods and make more efficient use of existing housing stock, check out the great work of David Holmgren and associates in Retrosuburbia.