A new free bus loop for the Kurilpa Peninsula!

Brisbane City Council has confirmed it is planning to trial the introduction of a new free bus loop to link South Bank and Kurilpa Point to Boundary St and the cultural heart of West End.

We’ve been lobbying for improved bus services for the inner-south side for some time, and while there’s still a long way to go, this is definitely a step in the right direction.

While many able-bodied residents probably don’t have a big issue with walking or riding from West End down to South Bank, those of us who aren’t quite as mobile – including older residents and parents with small kids – will benefit greatly from this. Crucially for local businesses, it will also help bring more visitors/tourists from the South Brisbane riverfront further into the Kurilpa Peninsula.

Where will it go?

The exact route has not yet been determined. Council's transport planning officers are still working out details like where the bus layover stops will be (for when drivers need to have meal breaks and go to the toilet) and how feasible it will be to run a loop on such busy roads. They've told me that the free loop service is likely to have a frequency of every 20 minutes (which could be better, but hey, I’m not going to knock a free service), and will probably only run in an anti-clockwise direction. This is because corridors like Vulture St and Montague Rd are so heavily congested, and a clockwise route would involve many more right-hand turns, which would add significantly to the route travel times.

This new (trial) service is the result of sustained lobbying from a range of angles including my office, Business South Bank, and other major organisations like the Queensland Theatre Company. One of the catalysts for its introduction is the impending reconstruction of the Cultural Centre Busway Station as part of the Brisbane Metro project, which is due to begin in July 2022. Council is saying that this is only a trial, but if it’s really well-utilised (as I expect it will be) then it’s going to be very politically difficult for council to remove it again later on. The Lord Mayor actually first expressed support for this idea prior to the last council election in March 2020, but I’m always sceptical of LNP election promises, and I thought they’d probably use covid as an excuse to back away from it, so I’m pretty thrilled now that BCC has confirmed they’re actually aiming to introduce it mid-2022.

The accompanying image shows the route that I am personally advocating for. I’m calling it the Kurilpa Triangle. (To stress: The council hasn't yet confirmed what the exact route will be, but I think this alignment probably makes the most sense) 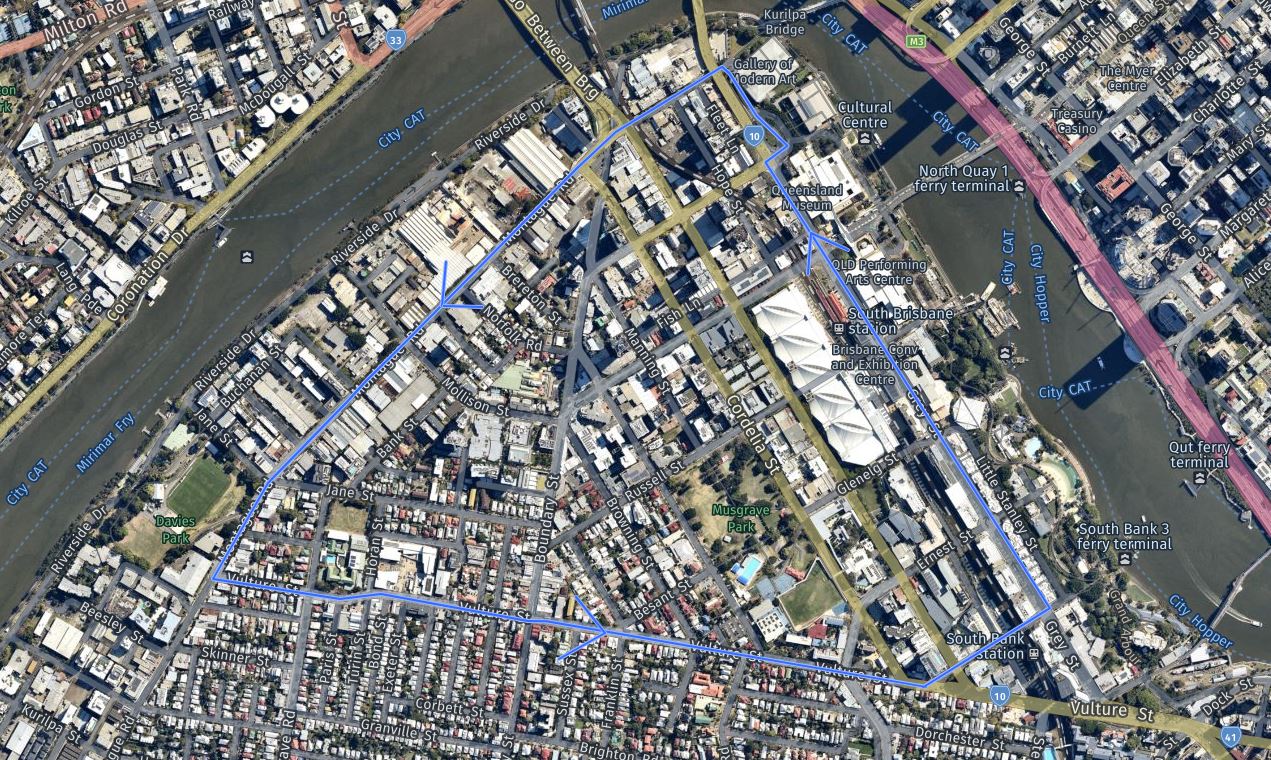 This circuit has the benefit of linking destinations which are slightly out of the way from existing bus routes – like Queensland Theatre Company – to commercial and transport hubs around Grey St and Boundary St, as well as providing another link from South Brisbane up to Davies Park. Perhaps more importantly though, this route would link the high-density neighbourhoods along Montague Rd to West End State School, Boundary St, Brisbane State High, and the South Bank train station and bus station.

Probably the biggest challenge with a Kurilpa bus loop is Vulture Street. Most of Vulture St is only a single lane in each direction, and in peak periods there’s a high chance the bus will get caught up in general traffic congestion (this has also been one of the main barriers to another route I’m advocating for – an east-west Cityglider service running between West End and Bulimba). I’ve told council officers that I would be supportive of introducing bus priority lanes along Vulture St on the approaches to some intersections where the lanes split into two (e.g. Vulture-Hardgrave, Vulture-Hampstead). If you wanted the bus loop to extend further east along Vulture St to the hospital precinct, you would probably have to convert one of the general traffic lanes on Vulture St (where it crosses over the rail line) into a bus lane in order for the service to be reliable.

Whatever route BCC goes with, the reality is that the Kurilpa Triangle Loop is not going to be a fast service that’s attractive for commuters who are trying to get in and out of the city centre as quickly as possible (those people can either walk, ride or catch one of the existing high-frequency services that run straight into the CBD). This will be a slower, circuitous route that will likely stop at quite a few points, filling gaps in the network and linking people who can’t walk long distances to other services and transport nodes.

The most exciting part is that this will be a free service – accessible to everyone regardless of their income. I hope one day, all public transport in Brisbane will be free, but for now, we’ll be able to point to services like this as examples of what’s possible.

As an aside, I think this new service in an interesting case study in how the transport projects that the business sector is lobbying for tend to get prioritised ahead of other much-needed bus routes. Lots of local residents will benefit from this, but I don’t think the LNP would have agreed to it if not for the fact that a lot of the larger businesses/stakeholders around South Bank were also pushing for it.