After sustained pressure from my office, council has finally agreed to release the draft map of the proposed new parking rules, which will be introduced into the southern half of West End and Highgate Hill on 18 March.

Depending on your browser settings, you should be able to zoom in on this map, or download a PDF of the map, but if you're having any trouble interpreting it, feel free to call my office or email [email protected] and we'll try to talk you through the implications for your street.

The council has asked me to emphasise that this map is a draft, and that a few more minor changes might be made prior to the signs being installed in March. The officers have tried to balance the competing needs of neighbouring residents. Some people wanted more of their street signed as resident permit parking, while others didn't want any changes to their street.

Some parts of the peninsula, such as the southern side of Highgate Hill and the high-density area to the west of Montague Rd, will not have any significant changes to existing rules, so residents in those neighbourhoods will not need to apply for permits.

Please note: When you apply for a permit online, you are not told that it's possible to get a physical, hard-copy visitor permit. But I strongly encourage all residents who are applying for visitor permits to call up 3403 8888 and specifically request a physical visitor permit. Having a physical permit that can easily be passed from one visitor to another is much simpler than having to go online to register each visiting vehicle. You can apply for a visitor permit even if your household doesn't have a car of its own. 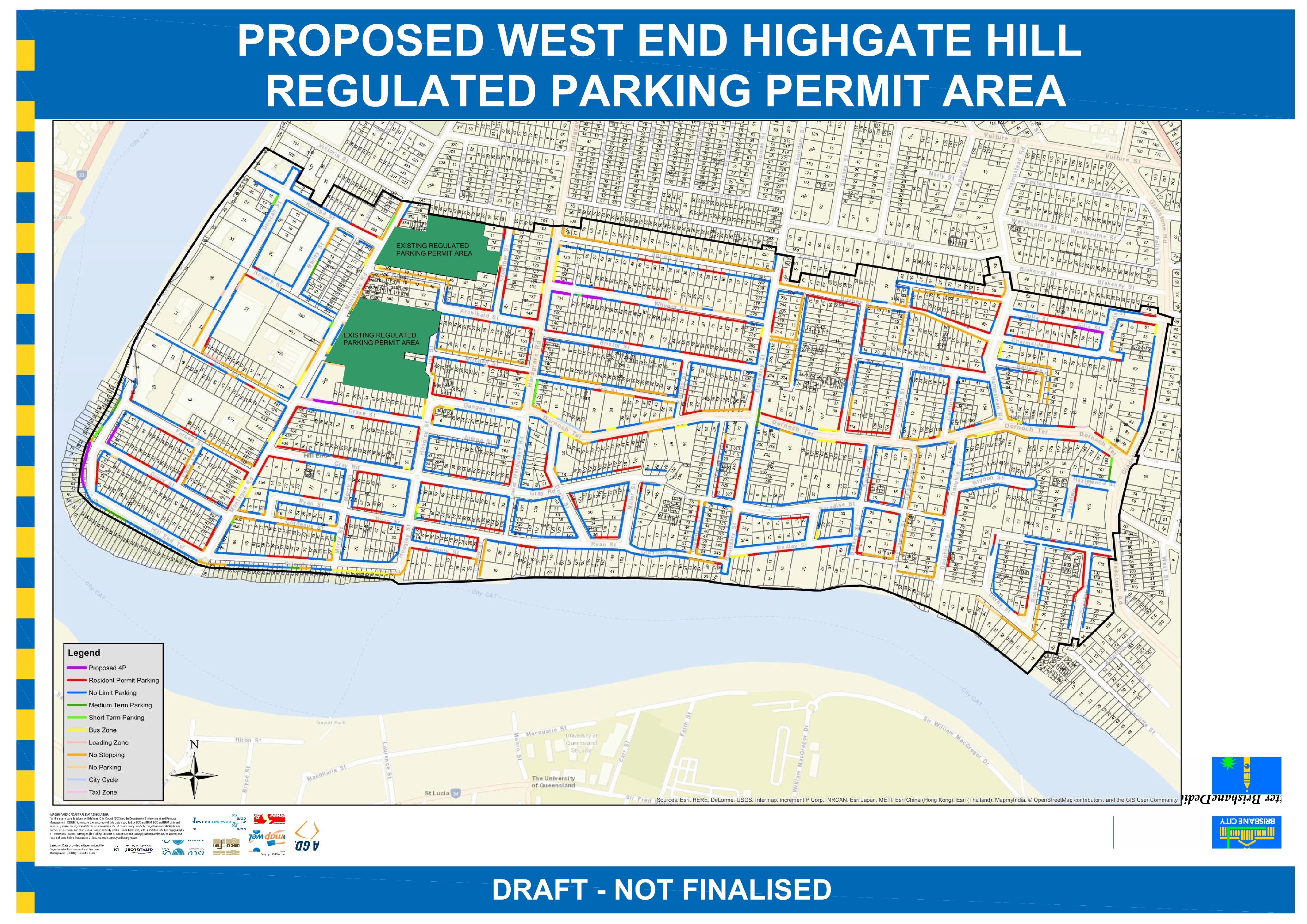 Hey everyone, council is sending out letters to the southern part of West End and Highgate Hill this week, advising that the resident parking permit scheme will be introduced in mid-March 2019.

I think this is a really botched job of public communication, because they're telling residents that the scheme will be introduced, but not providing any detailed info about how the rules and signs will change on individual streets.

I've previously (and repeatedly) requested that council publish a map showing the proposed changed rules so residents can view them and make comment before the new signs are actually installed. It's common sense that council would tell people how the rules are changing on their street before actually making the changes. Either way, once the new signage is rolled out, we can also still make further changes easily enough.

The most confusing bit is that in some parts of West End and Highgate Hill, council has decided based on resident feedback that they won't be making any changes to existing parking rules (which is good) but they are still sending out a general letter to all residents saying that the permit scheme is coming. So people might mistakenly believe that the rules on their street are changing, when in fact it's just a generalised notification letter that the whole suburb is receiving.

The following images show the other information which council is circulating internally. 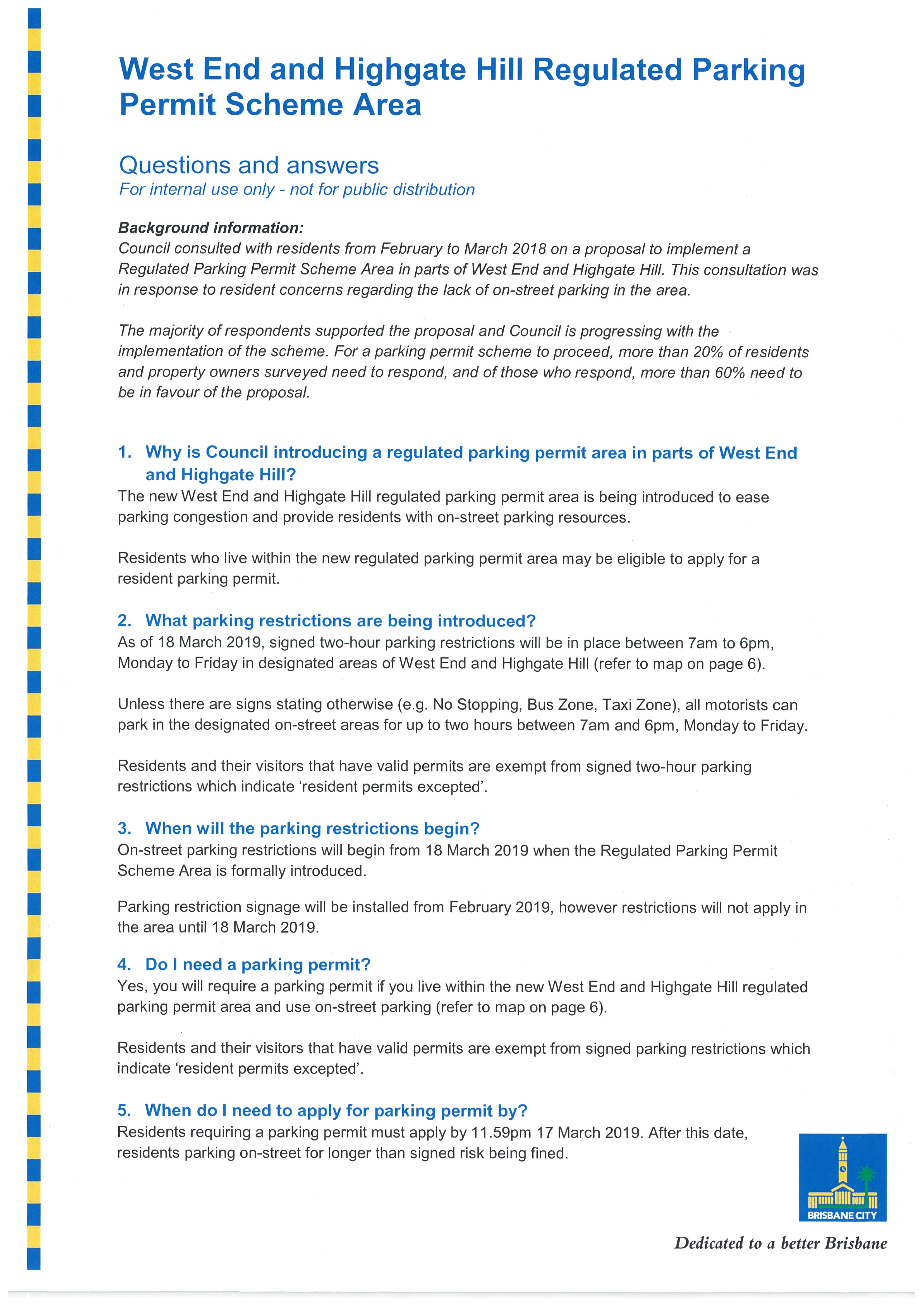 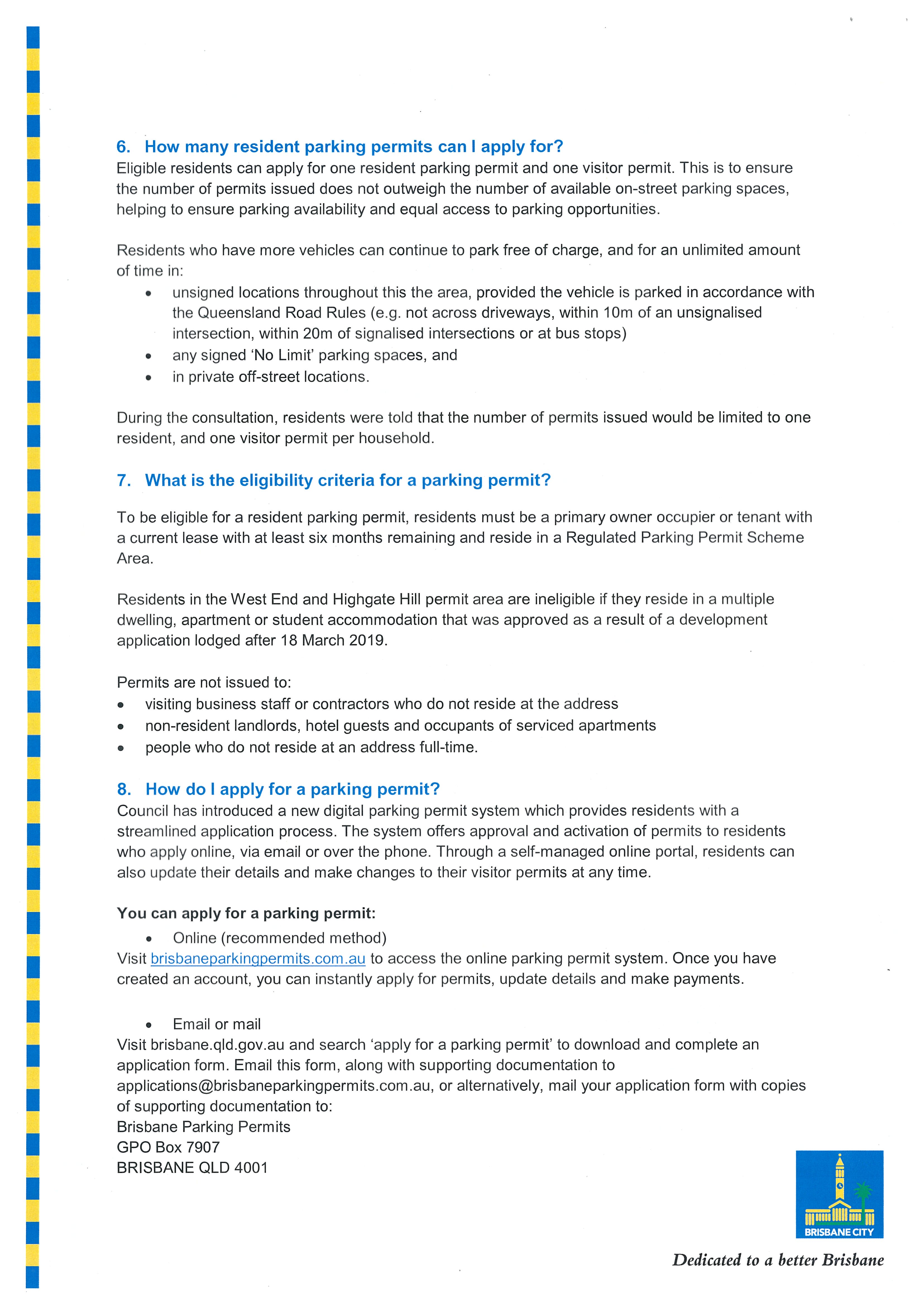 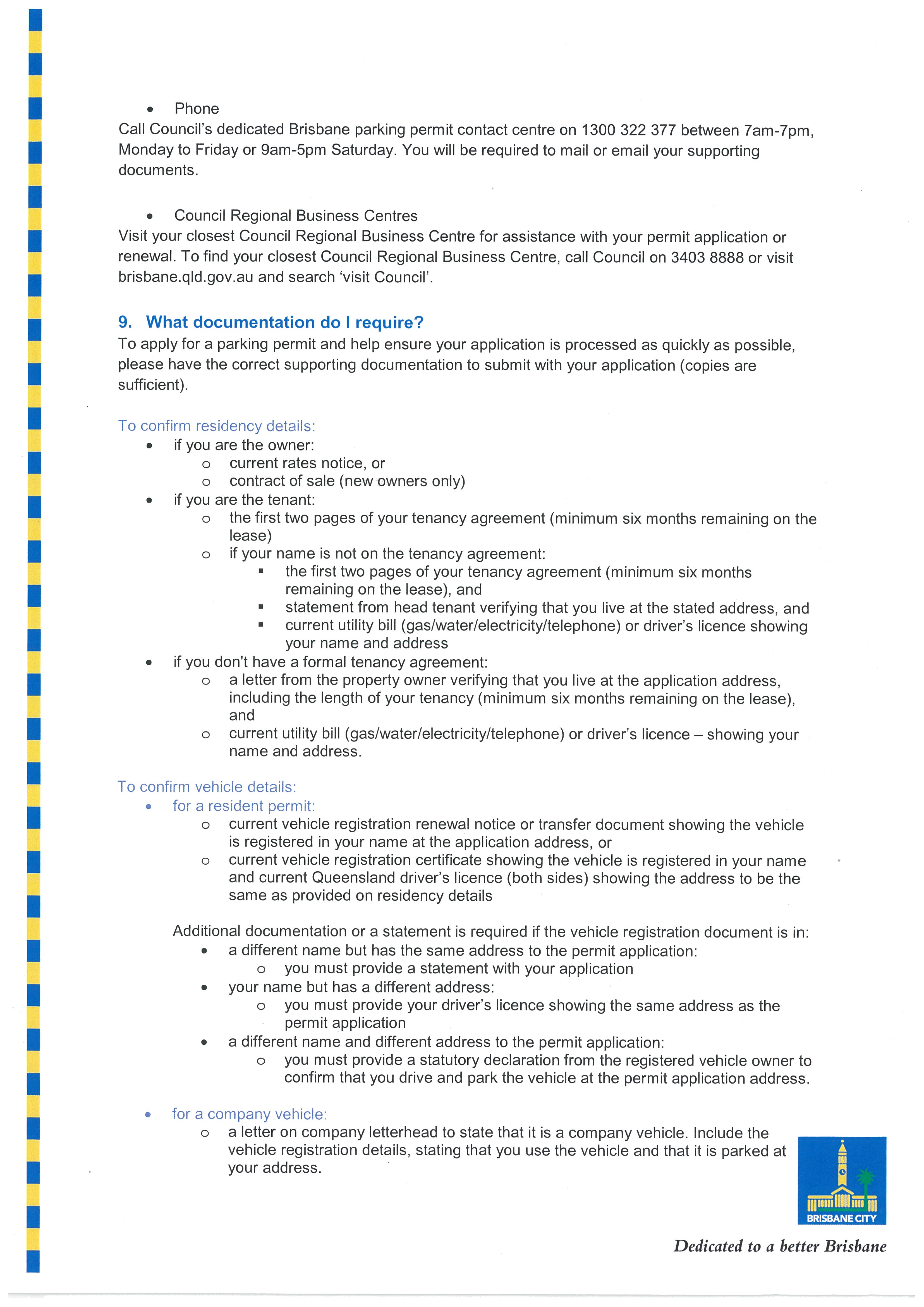 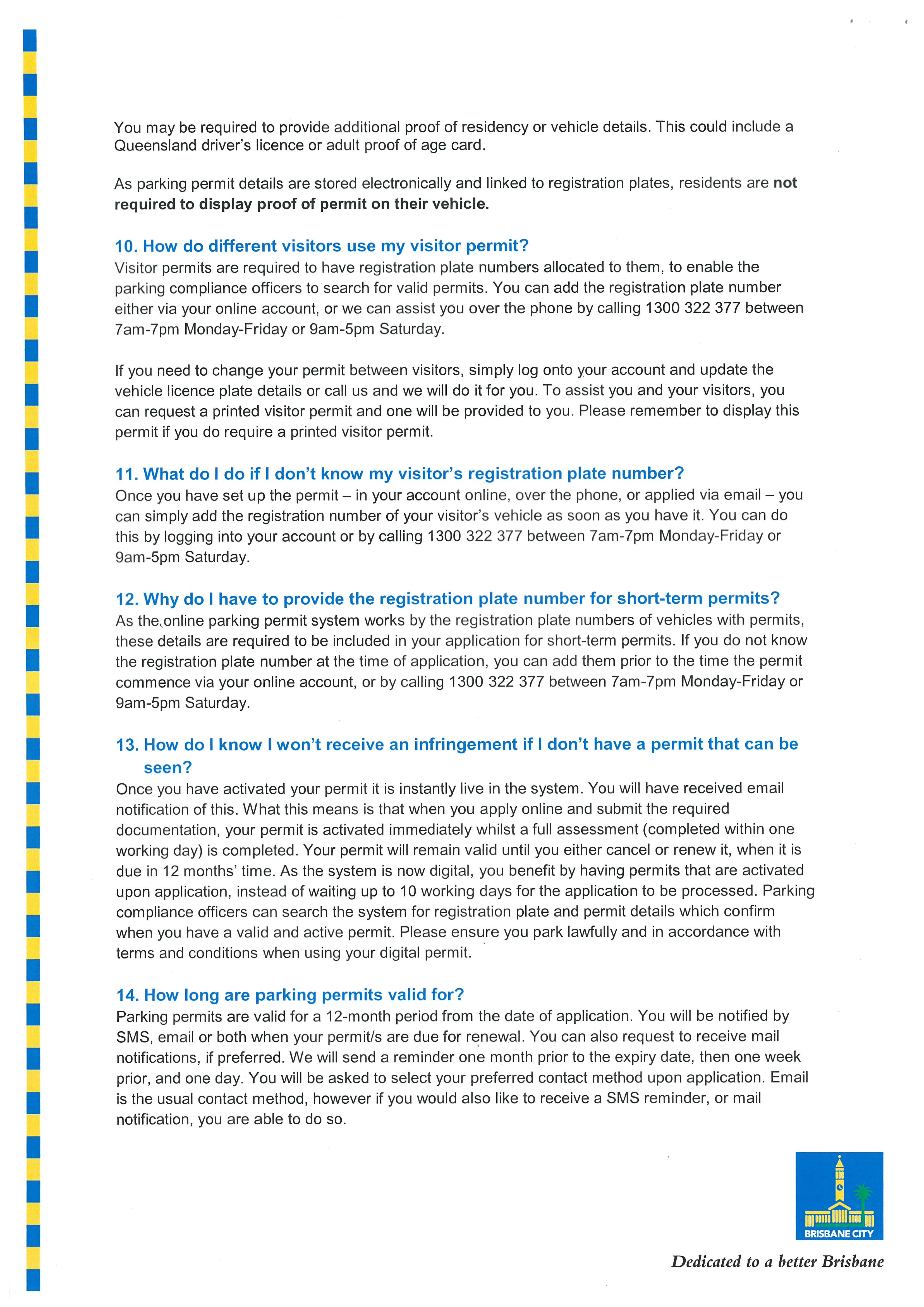 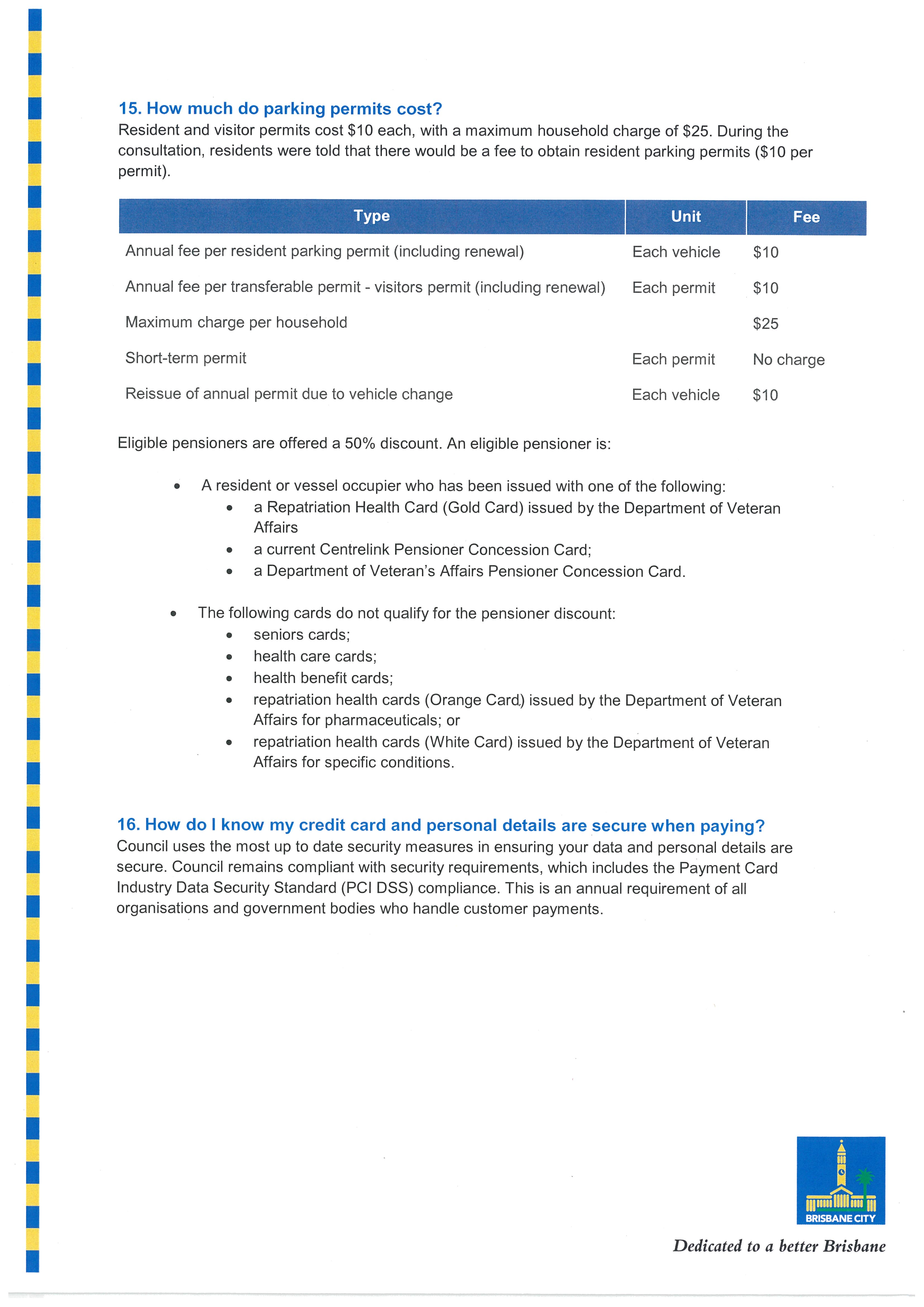 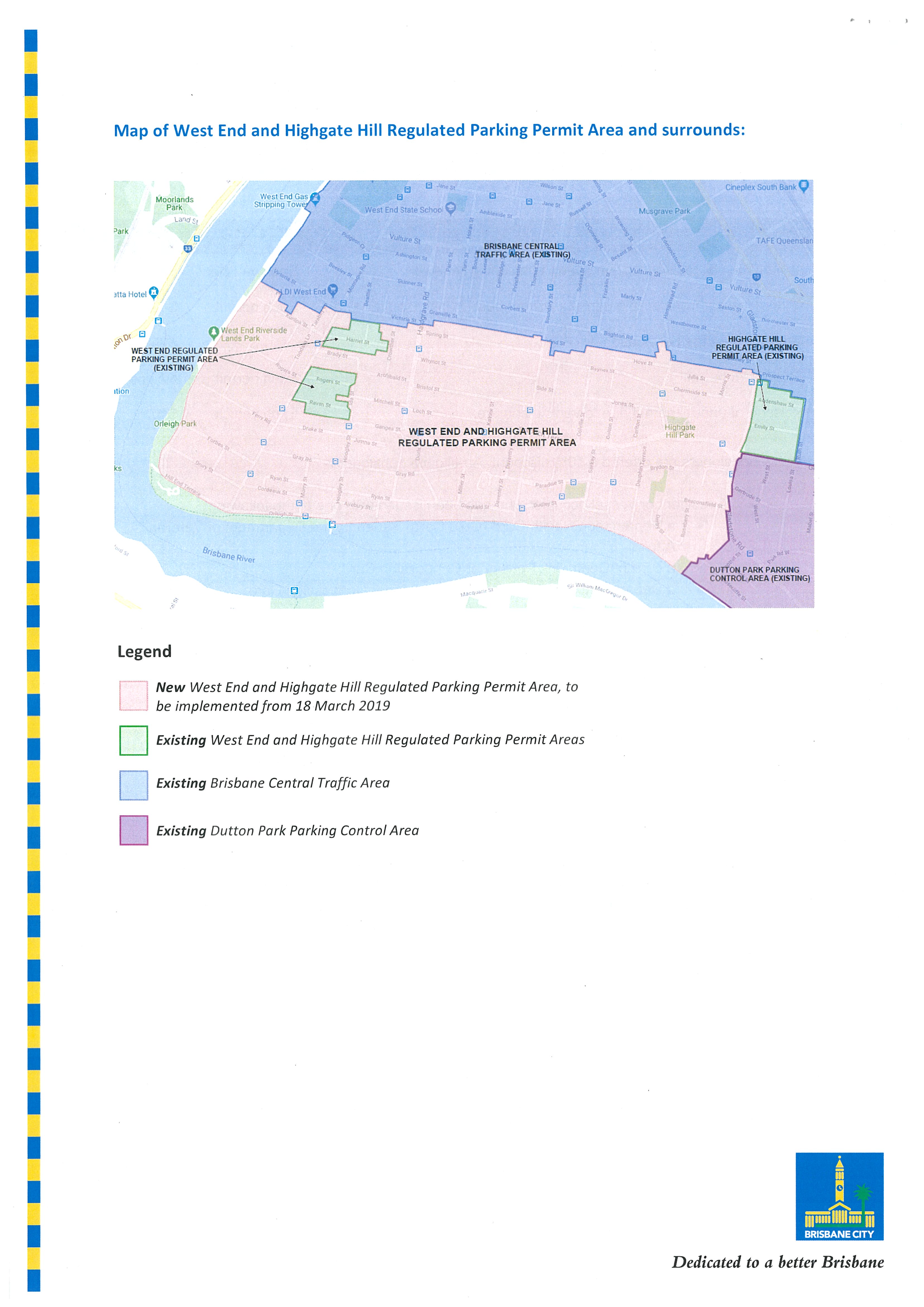 Previously
Do you live within the bright red zone within this map? If so a new Resident Parking Scheme has been proposed for your area. Read below for more details.

A Resident Parking Permit Scheme usually means that unless a particular section of street is designated otherwise, you can only park there for two hours (2P) unless your car has a resident permit or a visitor’s permit (in which case you can park there as long as you want). In other schemes around Brisbane, a common arrangement is for one side of the street to be free unlimited parking for everyone, while the other side is 2P (free two-hour parking) for everyone and unlimited parking only if you have a resident permit.

Importantly though, the scheme allows a lot of flexibility so that different streets can have sections signed as free 4P, 8P etc., and areas near small businesses can have more ½P and 1P parking bays to make it easier for customers who are visiting briefly to find somewhere to park.

Because 4101 has a high proportion of short-term renters, it might be the case that in some streets, only small sections will be resident permit areas and the majority of the street will remain free unlimited parking. It will be up to residents to talk to your neighbours and agree on what parking rules you want in your street, then provide that feedback to council.

Returning the council form and saying you support the introduction of a resident parking permit scheme doesn’t necessarily mean you support specific parking rule changes on your street. It means you support the council engaging in further research and consultation with residents to determine what parking rules would most effectively strike the right balance between the parking needs of residents and those of visitors to the suburb.

HOW THE PERMITS WORK

There are two types of permits:

The BCC has told me that each household will be eligible for a single visitor permit even if you don’t have any of your own vehicles registered at your address.

HOW MANY PERMITS PER HOUSEHOLD? 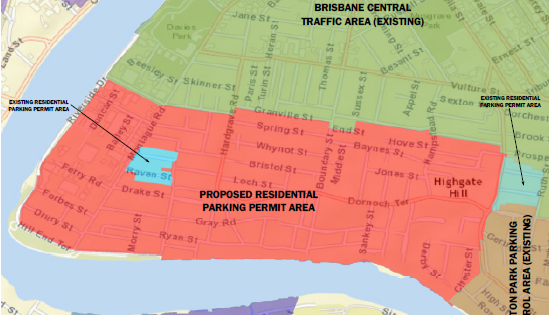 There are many streets in West End and Highgate Hill where people drive in from other parts of the city, park all day and catch public transport into the CBD. This increases local traffic congestion and competition for parking.

Introducing a default 2P or 4P limit unless the vehicle has a permit will discourage this pattern of parking, and should help encourage more commuters to switch to public transport.

Discouraging commuters from parking all day on residential streets will free up more street parking for residents and visitors. The permit system won’t guarantee a parking spot for residents, but it will increase turnover and reduce competition. Residents will have a greater level of certainty that parking will be available on their street. Each resident permit will be connected to a specific address, and will allow residents to park on their own street or on one or two neighbouring streets.

The introduction of this scheme is also a good time to push for more disability parking bays and loading zones.

Some concerns and downsides

Currently, Council charges $10 per permit per year. This means you’re paying for a permit to park on your own street, but there’s still no guarantee you’ll be able to find a parking spot. However, the evidence from other suburbs with such schemes is that they definitely make it easier for residents to find parking spots, so while it might seem strange to have to pay when there’s no guarantee of a space, having a paid permit system certainly makes it easier than the current free-for-all, where residents don’t get priority.

In the context of all the other costs associated with vehicle ownership and rego, $10 a year is pretty negligible.

Some households sell their visitor permits to motorists who live in other parts of the city so they can drive into the inner-city and park all day for free. The council objects to this practice, but has a hard time stopping it. This is one of the reasons the council is reluctant to issue multiple visitor permits per household. This isn’t a huge problem, and it’s not really an argument against introducing a permit scheme, but it’s something to keep in mind.

In some parts of the city (e.g. Woolloongabba), there are designated ‘Traffic Areas’ which apply blanket default parking rules to the whole area. Traffic Areas are very different to the Resident Parking Permit Area proposed for 4101. A common criticism of the Traffic Areas is that there are only a few big signs at the entrance to the area, rather than detailed signs explaining the parking rules on every street. This means new residents, visitors and people from other parts of the city sometimes get caught out because they don’t realise they’re parking in an area that has a strict time limit.

However, for Resident Parking Permit Areas, every street is individually signed to clearly indicate what the rules are on that particular street. It’s also important to remember that  when a new resident parking scheme is introduced, the council parking inspectors usually issue warnings rather than fines for the first few months, while people get used to the new system. During consultation, it’s important to put the pressure on council to ensure that when the scheme is introduced, every single street is clearly and accurately signed so that newcomers and visitors know what the parking rules are and won’t be fined unfairly.

PROVING YOU’RE A RESIDENT CAN SOMETIMES BE TRICKY FOR RENTERS

This isn’t as big a problem as it is for other government services, because the council is reasonably flexible when it comes to proving where you live, and primarily looks at your vehicle’s registration address. For tenants who move a lot, or anyone who is worried they’ll have trouble proving that they’re entitled to a resident parking permit, feel free to get in touch with the Gabba Ward office directly and we’ll help you prove your current address.

The most persuasive argument against resident parking permit zones is that they can embody some of the worst aspects of parochialism and self-interested NIMBYism. Increasingly, people on lower incomes are finding it harder to afford to live in the inner-city. This means they often have to commute from the outer suburbs for work and to access community services, while inner-city suburbs like West End are becoming more exclusive and dominated by wealthier residents. So is it right for comparatively privileged inner-city residents to have priority access to free street parking in suburbs like West End while poorer residents from the outer burbs have to pay for it?

Inner-city residents have more public transport and active transport alternatives, and therefore are arguably less entitled to demand access to on-street parking than residents who live further out and have fewer alternatives to driving. Streets are publicly owned land, and technically speaking, local residents have no greater claim over a particular street than people who live in other parts of the city.

In practical terms though, not everyone in the inner-city is wealthy. Not everyone in the inner-city has access to off-street parking (particularly in the old tin and timber character neighbourhoods, where many homes were designed without driveways). Many older residents have limited mobility and rely on their adult children for support (for a range of reasons these visiting carers often need to be able to park as close as possible to the front door). There are several valid reasons for offering local residents some priority parking zones on their own street. The challenge is to strike a balance so that there are still enough parking spots that non-residents can use when they commute into our suburbs.