Who's Really Planning Your Brisbane?

Brisbane City Council is currently running a ‘consultation’ process called ‘Plan Your Brisbane’ where they seek resident input into future trajectories for the development of our city. Their marketing and messaging borrows a lot from the rhetoric of radical urban planners and community activists who argue that people should have more of a say in how their city changes and evolves.

But the main problem with this process is that there is no tangible connection or direct relationship between the feedback that residents provide and practical outcomes. The council is not giving residents a binding vote in how infrastructure budgets are allocated or meaningful input into the drafting of the city plan and neighbourhood plans themselves. It is not offering us a vote as to whether new neighbourhood plans that change an area should actually be introduced, or giving us a say as to alternative policy measures that could make more efficient use of existing buildings.

This whole consultation process seems to me like little more than sophisticated propaganda which seeks to shape values and harvest data for the LNP prior to the next council election. It contrasts starkly with true collaborative consultation where you empower residents to actually make the decisions that shape their city. Surveying people and then ignoring the results is not consultation.

A deeper problem with Plan Your Brisbane is that it purports to be a holistic conversation about urban planning, but artificially narrows the parameters of debate and oversimplifies many complex issues to the point of being outright misleading.

This deceptive over-simplification is perhaps most obvious in the Plan Your Brisbane game. Using games and apps to engage and educate residents about urban planning is a great idea if done well. Town planning can be a difficult thing to get people interested in (at least until there’s a skyscraper going up next door) so I’m supportive of using a range of avenues and processes to raise awareness and seek feedback. But this particular game is so simplistic and flawed that I think on balance it does a disservice to the goal of fostering a deeper understanding of complex urban planning issues.

The game revolves around the idea of trade-offs i.e. you have to accommodate people somewhere, so you can either choose high density with more public green space, better transport networks and better services, or low density with less efficient services, less green space, and more expensive housing. This is essentially the ‘tall vs sprawl’ line that the property industry has been running for a long time now to justify cramming more and more people into neighbourhoods that don’t have the infrastructure to handle rapidly growing populations.

It’s clearly unsustainable to continue our recent trend of car-centric suburban sprawl, where we keep replacing bushland and farmland with low-rise residential estates. But BCC’s implicit suggestion that the only viable alternative is to cram people into highrise concrete shoeboxes completely ignores all the great work that so many forward-thinking architects and town planners have been doing to flesh out alternative ways to design housing and develop cities sustainably.

The game quietly omits the fact that although Brisbane is now densifying rapidly, even in the inner-city our transport network planning continues to revolve around cars, with very little investment in bike lanes, pedestrian crossings, traffic calming or affordable public transport. It’s all well and good to argue that higher-density makes it more cost-effective to provide public infrastructure, but that’s not what’s happening in practice. Both Labor and the LNP continue to resist suggestions for lowering speed limits and prioritising active transport. We’re getting higher-density apartment towers, but most of the residents are still driving.

I’ve written in a separate post about how we can sustainably accommodate a growing population without building so many highrises. Contrary to the rhetoric of both Brisbane City Council and the State Government, it may not actually be necessary to build 188 000 new dwellings over the next twenty-five years. In fact, Brisbane could easily accommodate over 200 000 new residents simply by making more efficient use of existing housing stock.

But this isn’t just about how many new dwellings we need. It’s also about where in the city we concentrate growth, how much space per person we think people need to live a comfortable life, and what sort of transport network we develop. None of these questions are open for discussion via council’s Plan Your Brisbane process.

Where’s the conversation about decentralised nodal development that doesn’t concentrate commerce and job opportunities in the city centre, but instead creates medium-density eco villages where everyone lives within walking distance of their workplace? Where’s the conversation about making developers pay their fair share for the cost of infrastructure? 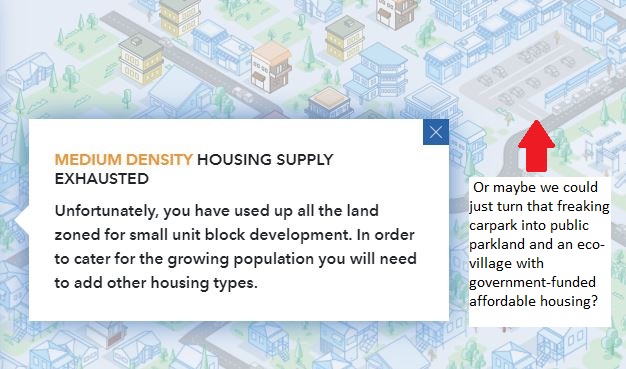 Perhaps the biggest myth perpetuated by this Plan Your Brisbane game is the idea that increasing the supply of private dwellings will significantly improve housing affordability, which is not necessarily true in the Australian context. The failure to even mention the important roles that stronger renters’ rights, vacancy taxes and government-funded social housing can play in improving affordability is a glaring omission from this discussion.

Unfortunately, my version of the game didn’t seem to include the button that lets you compulsorily acquire the sprawling backyards of inner-city mansions and turn them into public soccer fields and community gardens.

It’s all well and good to talk about trade-offs, but any consultation process that expects you to rank desired outcomes like ‘greenspace’, ‘affordability’, ‘lifestyle’ and ‘travel time’ as though they are mutually exclusive options has clearly succumbed to arbitrary and illusory constraints promoted by a profit-hungry property development industry. Where’s the survey question that asks me whether I would prefer to place higher taxes on big banks, multinational corporations or predatory land speculators?

Call me cynical, but I feel like this consultation process is a huge missed opportunity. I worry that a lot of residents who engage with it will feel frustrated and disempowered at being presented with such a narrow range of options. This in turn reinforces nimbyism, making people distrustful and apprehensive of any kind of development – even the well-designed medium-density mixed-use stuff that we need more of. Others will play the game and be completely suckered in by the false binaries, believing that there really aren’t any other alternatives and that the only future they can aspire to is working 50-hour weeks to pay off a 30-year mortgage on a 60m2 apartment.

The main question we should all be turning our minds to is “who makes the real decisions?” This Plan Your Brisbane game and the attached survey do not in any way connect to the city plan or the other laws and policies that actually shape our city. The endless pages of results and feedback will end up being condensed into an over-simplified table from which establishment politicians cherrypick data to justify whatever decisions their corporate financiers want them to make at the time. Behind closed doors, a small group of powerful people are carving up our metropolis and remoulding it to suit their own values and financial interests, while using ‘Plan Your Brisbane’ to gather information on how best to dupe the populace into passively accepting the status quo.

Rather than sham consultations, we need to demand genuine control over the future of our neighbourhoods and our entire region. If we quietly accept whatever they serve us, they’ll keep cooking up the same old shit.