What's going on with the Queen Bess St 'Park' in Woolloongabba? 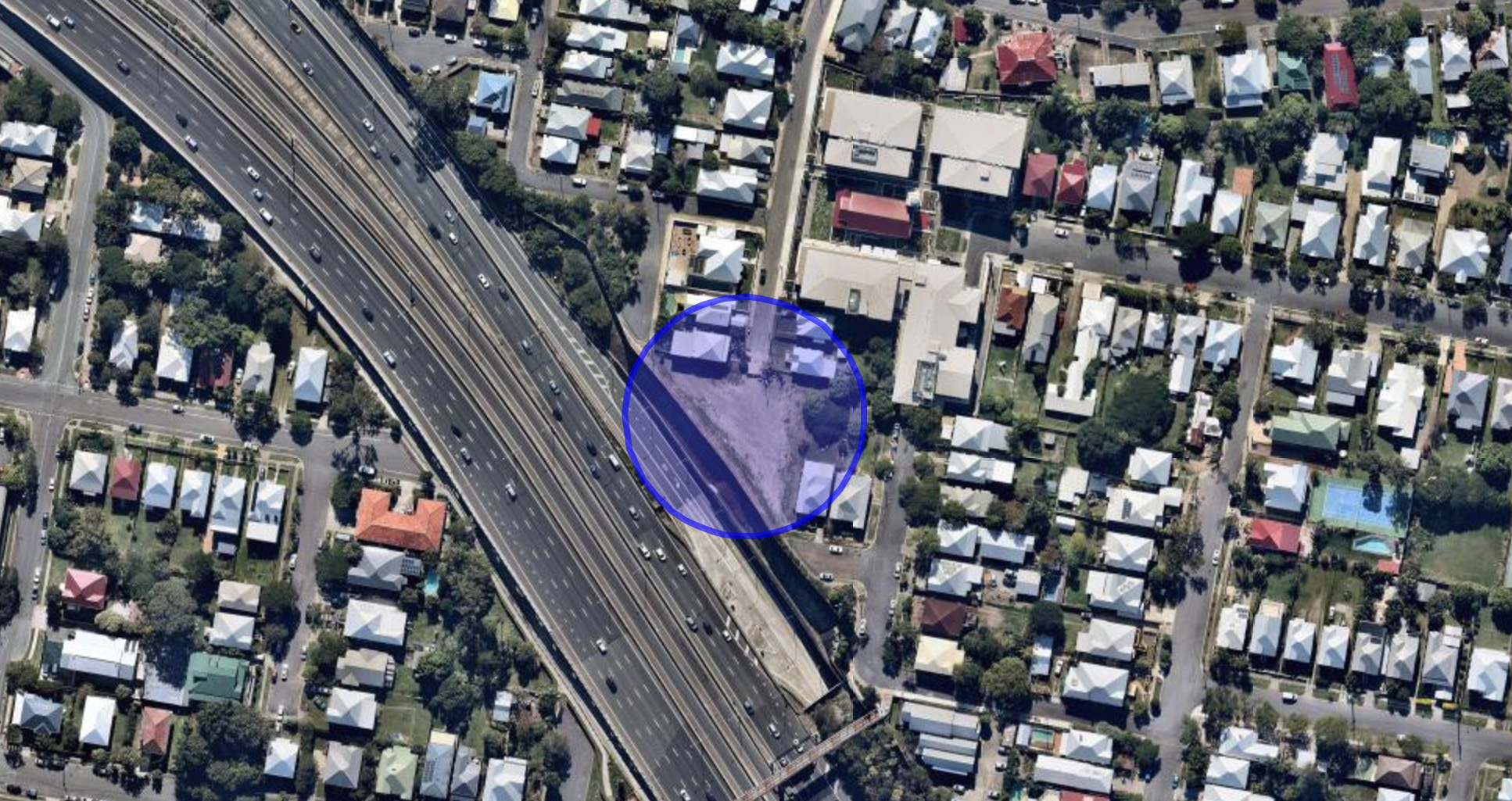 For years now, residents have been asking that the triangular block of government-owned land at the southern end of Queen Bess Street in Woolloongabba be converted into a public park.

There’s a similar slightly larger block on the other side of the motorway at the eastern end of Harrogate Street, which I believe should also be converted into a park.

Recently, Deputy Premier Trad sent out an email to thousands of South Brisbane residents complaining that although the State Government was willing to hand over the Queen Bess St block of land to Brisbane City Council, council was refusing to spend the money to fix it up and turn into a public park. (Similar text currently appears on her website at this link)

It struck me as a little odd that the Deputy Premier would spend the time and energy to make a public complaint in this way about something like this, so I did some digging and requested all the written correspondence council had received from the State Government. There wasn’t much in writing (I’ve uploaded the docs here if you want to check them out - Letter 1, Letter 2, Letter 3, Letter 3 attachment, Letter 4).

In a letter from April 2016, Deputy Premier Trad wrote to Lord Mayor Graham Quirk explaining that:

The Lord Mayor then wrote back, accepting the offer. After that, there’s no written record of communication until 27 June, 2017. I expect there have been other off-the-record phone calls back and forth. The most recent email from TMR suggests that Hutchinson Builders “has met its make good obligations in relation to vacating the land.”

What I suspect has happened is that although Deputy Premier Trad told BCC that Hutchinson Builders had agreed to improve the land and install concrete pathways, the actual written agreement between TMR and Hutchinson didn’t go into enough specifics along those lines, so Hutchinson has vacated the site saying “well we’ve done what we agreed to” and now the site isn’t quite up to the standard the State Government promised to BCC. Unsurprisingly, BCC is now pushing back and trying to get the State Government to stick to Deputy Premier Trad’s original commitment. BCC tends to prioritise funding for park upgrades in more centrally accessible locations, and the council's approach to budgeting isn't flexible enough to allow it to spend a lot of money on establishing a park in this tucked-away corner.

I’m writing to the Deputy Premier’s office to seek clarification from their end. It looks to me like a classic example of buck-passing between State Government and Brisbane City Council, where each party is hoping the other will eventually cough up the money.

In this context, the public email that the Deputy Premier sent out is particularly odd, because it appears to contradict what she wrote in her original email to the Lord Mayor, and makes no mention of the agreement with Hutchinson Builders.

One element that I find particularly unsatisfactory is Deputy Premier Trad’s suggestion that the preliminary sketch in her original letter reflects the results of consultation with residents, even though she is now sending out a new survey asking residents what they want in the park.

As a local resident and now the local councillor for the area, I certainly wasn’t made aware of any public consultation process last year about the future of this site. I suspect that the consultation the Deputy Premier referred to was just a series of one-on-one conversations with residents who happened to approach her office over the past few years.

Genuine public consultation about proposed public spaces needs to be widely promoted through a range of avenues and mediums to ensure a broad and diverse range of voices and perspectives are represented. Otherwise, the only people who hear about and engage with these consultation processes are the ones most closely connected to the political establishment. Dr Natalie Osborne and Dr Jason Byrne of Griffith University have written about how this contributes to a sense of losing control over our neighbourhoods, and about how residents are responding to this disempowerment.

The survey about the Queen Bess park that was sent out a couple of weeks ago is a better attempt at public consultation, and should be the first step in a multi-stage consultation process, but it’s odd that the Deputy Premier has decided to take this approach without involving me as the local councillor for the area, and without having resolved the ongoing dispute with BCC about who will actually pay for the park upgrades.

I’ll be asking more questions about this over the coming weeks, and hopefully all parties involved will be able to swallow their egos and reach a resolution that delivers for residents. But when BCC and the State Government drag their feet and squabble over finicky details, it’s little wonder that residents around Brisbane are taking matters into their own hands and starting their own guerrilla gardening projects.

Personally I think that even though this park is a little out of the way, there’s no reason it can’t include a range of recreational facilities. It probably also needs a second path connecting Arrow St and Bourne St as this has been a common shortcut for pedestrians. The problem is that ideas for playgrounds and basketball courts don't mean much if neither BCC nor the State Government have any budget to pay for them.

I think it would also be great if the larger block of land at the end of Harrogate St (on the other side of the motorway) could be redesigned to include some kind of multipurpose outdoor skating rink, as it’s right next to the bikeway and fairly close to the Buranda bus and train stations, but that obviously depends on the views of nearby residents as well.

I’ll keep you posted as I learn more about what’s going on here. There are many small triangles of government-owned land along the Pacific Motorway that could be used creatively to create bushland reserves or useable pocket parks. In some cases, there are opportunities to amalgamate these lots with neighbouring city council-owned sites. Unfortunately, BCC seems more interested in selling off these small parcels of land than working with the State Government to combine land-holdings and deliver more green space for residents. This is largely because the council's criteria for what makes a good potential park are a bit too rigid, so they often don't think laterally about alternative innovative ways to use these spaces.

However it does seem like BCC's organisational culture regarding pocket parks is changing gradually due to pressure from a range of directions (including my office), so hopefully we'll see this shift in future.