As I’ve explained to residents previously via email and social media, there’s a patch of land along Riverside Drive (just south of the dog park near Hockings St) that has a range of contaminated materials buried deep underneath the soil as a result of former industrial uses. I was waiting for BCC to release more detailed information about this, but I haven’t seen anything on their website yet so here’s a bit of an info dump about the issue. 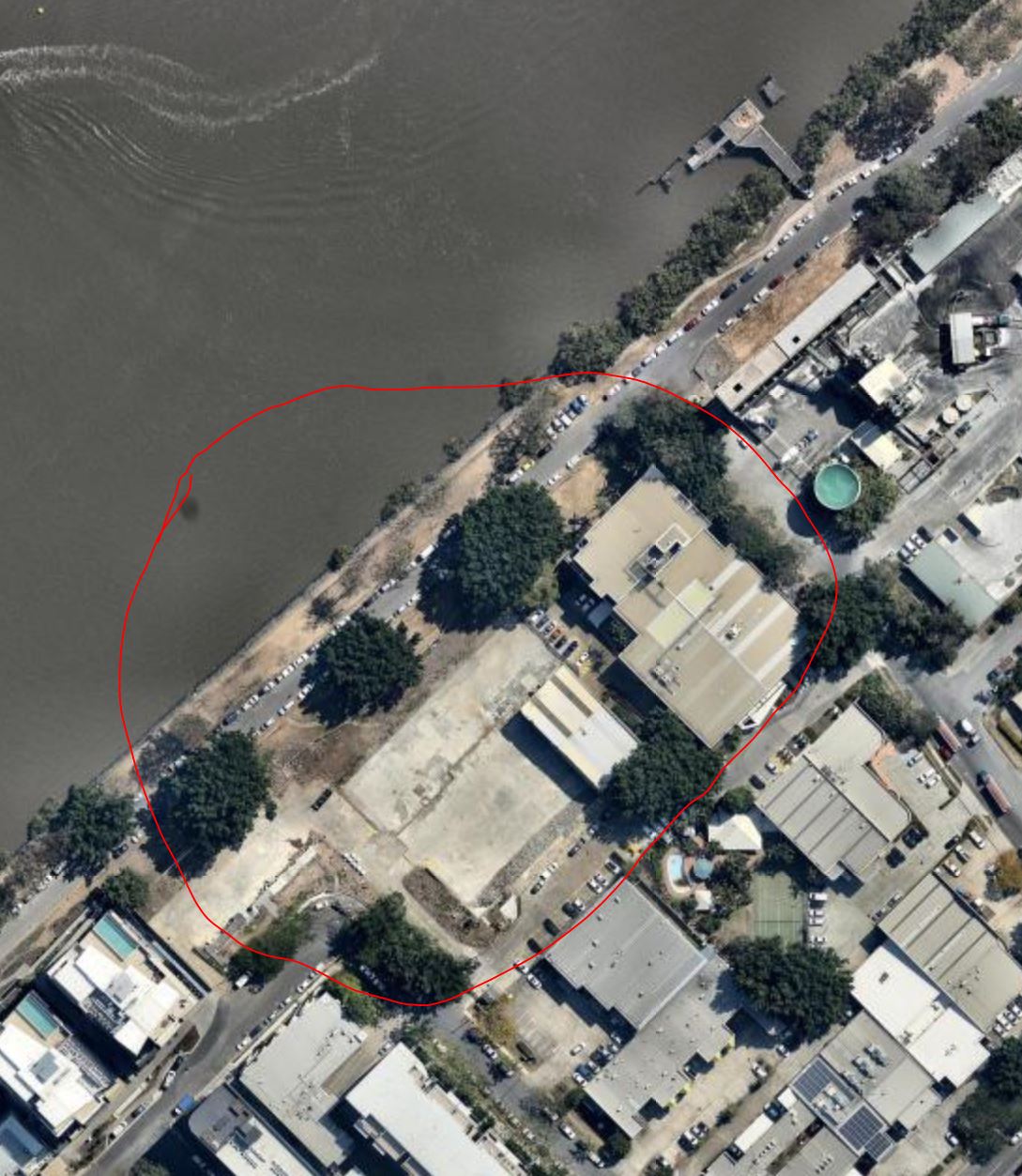 The area in question is a short stretch of land along the river, roughly between Donkin St and Hockings St. It includes State Government-owned land along the water’s edge, the council park just behind, and a portion of the private industrial site at 25 Donkin St. The dog off-leash area falls within the area identified as contaminated, but the heaviest contamination is slightly to the south of the dog park, underneath the State Government-owned open green space and the roadway.

If you walk along Riverside Drive, you’ll note that near the dog park there’s a stretch of riverfront where mangroves don’t seem to grow very well. There’s an abrupt break in the tree line, and I believe this might be due in part to the contaminated material.

The contaminated material is a complex mix of chemicals and materials including:
- liquid tar products, both light non-aqueous phase liquid (basically tar that is sitting on top of the groundwater), and dense non-aqueous phase liquid (tar that is sitting beneath the groundwater)
- a range of heavy metals and ammonia
- phenols (smell a bit like nail polish remover)
- polycyclic aromatic hydrocarbons (smell a bit like bitumen)

The contamination is from a couple of industrial activities including a coal tar processing plant, which I understand closed down in 1984. I'm told that the company responsible for the contamination no longer exists.

Is this a major health issue?

Based on the advice I received this week, I don’t believe it’s worth worrying about too much. The sludge would probably cause skin rashes if you came into direct contact with it and would make you very sick if you ingested it, but the contamination is buried at least a metre underground (and much deeper in most places).

The main risk is posed by the potential for contaminated materials to gradually leach out into the river, which recent tests have confirmed is continuing to occur. Every high tide, saltwater flows up from the river and mingles with the groundwater. As it recedes, it pulls some of the tar sludge with it into the waterway. The most recent tests also show that small amounts of the contaminated material are getting deposited onto the narrow strip of sandy beach that’s exposed at low tide. My advice is that as a precaution, residents should avoid walking on the sand at low tide, and should obviously refrain from swimming in this stretch of the river just to be safe.

I don’t want to downplay the health risks entirely, but I would suggest that these risks are pretty low compared to the many other health and safety risks of living in the inner-city, such as inhaling car fumes, speeding vehicles, lack of safe pedestrian crossings and bike lanes etc. If you have further questions about the contaminated material and possible health risks, call 1800 669 416 and ask for information about the Riverside Drive Contaminated Land Remediation project.

What’s going to happen to the site?

BCC is currently negotiating with the State Government and the developer of the adjoining privately owned land to extract and clean up the contamination as part of a single remediation project. It wouldn’t make much sense for the council to just clean up its section of land if pollution is still moving around underground from the State Government-owned section. I haven’t been privy to these conversations, but it seems like maybe the State Government is dragging its feet about agreeing to pay for the remediation of its stretch of contaminated land.

Once the three landowners agree on a process and cost-sharing agreement, the contaminated material will be excavated and replaced with clean soil. This will cause major upheaval in this stretch of Riverside Drive. It looks like the loss of a few large fig trees will be unavoidable, which is very very sad. The project team tell me they’ve done everything they can to minimise impacts on established trees, but some of the big ones are probably going to go.

The remediation might take a year or two, after which the area will be restored to parkland. I’ve asked council to start work on a draft masterplan for the Riverside Drive parkland and I’m waiting for them to get back to me. (I expect I’ll be waiting a while unfortunately) I’ve also asked (again) for the whole area to be closed to vehicular traffic, which will free up more land as green space rather than parking.

How much will it cost?

This is a major project requiring specialist skills and equipment and some significant excavation work, which is complicated by the river and the polluted groundwater. Initially, the BCC budget allocated $8 million for this project, but today we learned that it might costs as much as $15 million to safely remediate the council-owned land alone (and much more than that for the State-owned and privately-owned plots of land). This is a huge amount of money, and is a reminder that we can’t always big businesses to clean up after themselves. Long after the businesses are gone, taxpayers are left footing the bill. (We’re currently seeing a similar problem emerging with remediation of former mine sites) Either way, it’s an issue that needs to be addressed at some point, and given that the material is still slowly seeping out into the river, it’s better that we do it sooner rather than later.

What’s going to happen to the dog park?

The existing dog off-leash area will probably need to be dug up altogether. BCC is currently looking for a new replacement site somewhere along the river, ideally with a bit more space and shade. It’s possible that we could incorporate a dog park into the redesign of Davies Park but that would obviously be subject to more public consultation. BCC has agreed that the new dog park will be installed before the old one is closed for the remediation project.

We’ve also allocated some of the (small) local parks budget to significantly expand the other existing dog off-leash area at the southern end of Riverside Drive near Orleigh Park. I’ll share the plans for this in the near future, but basically this dog park will be much bigger than the current one near the sailing club and will include two separate sections – one that remains open to the river for owners who like to let their dogs go for a swim, and another section that is fully fenced.

While I’ve been doing my best to learn as much as I can about this remediation and to share that info with residents, the LNP has been a bit slow about releasing information, in part because I think they’re worried about sparking a public panic. As I said further up, there’s an information hotline you can call about the project - 1800 669 416. You will be more likely to get one of the people who are directly involved with the remediation if you call during office hours. I’ll let you know as soon as I learn anything more.