Let’s cover over the stretch of train line near Gloucester St and Frith St in Highgate Hill to create a new public park!

There are many inner-city neighbourhoods where a train line runs through a suburb at slightly below ground level. We now have the technology, the resources and the engineering skills to cover over these stretches of train line with precast tunnels to create more public space. 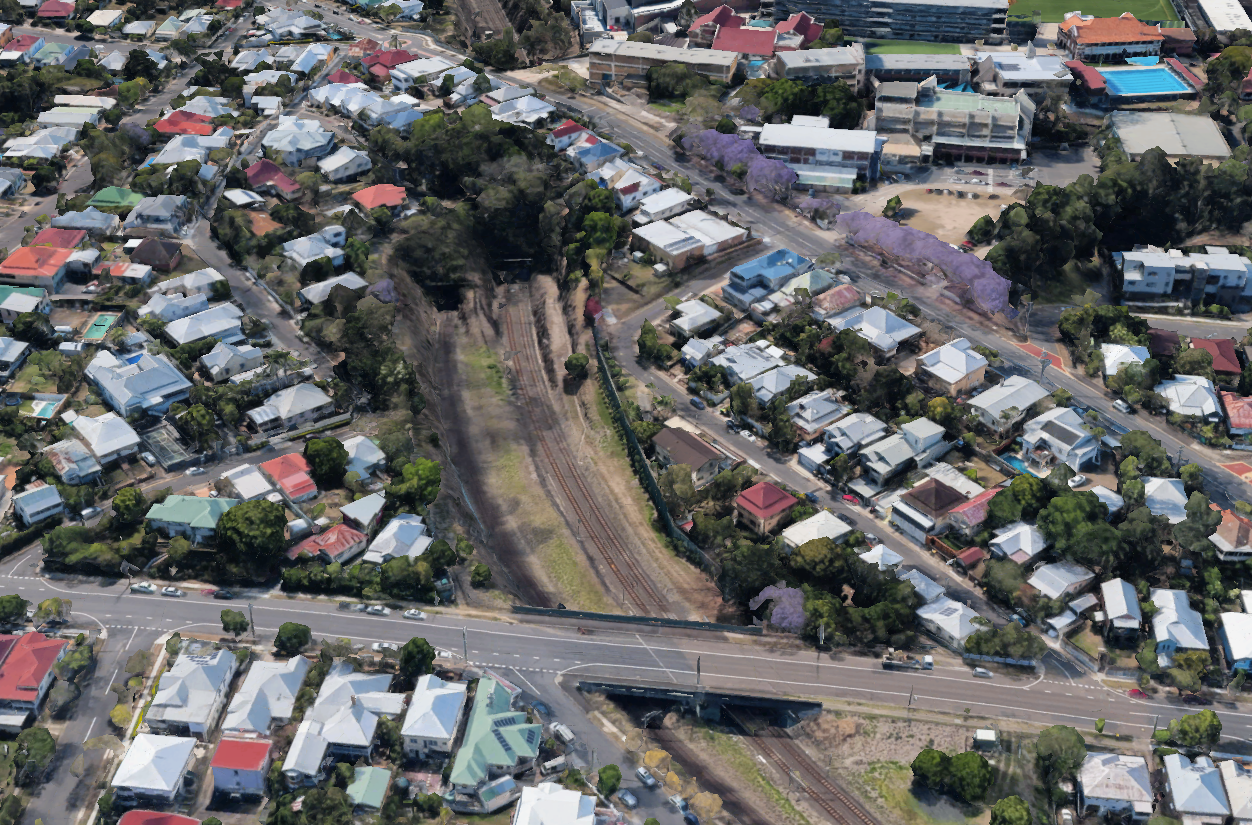 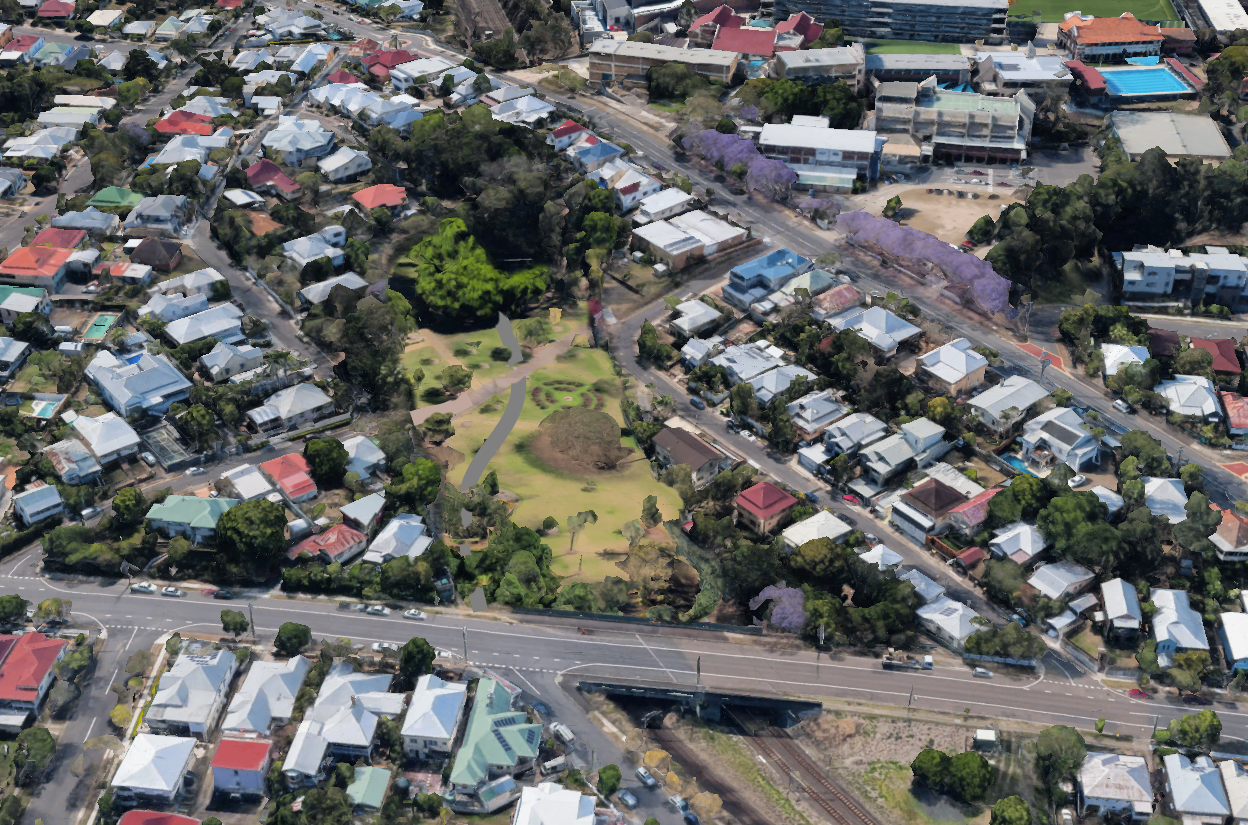 The presence of very shallow tunnels would make it difficult to use these sites for buildings that require deep foundations, but they’re a great opportunity to create public green spaces.

The broad area of exposed train line next to Gloucester St was once a train station. It was closed decades ago, mainly because its close proximity to the newer South Bank train station made it a little redundant. But as a result, there's a much wider stretch of public land in this area than along most other train lines.

Some of the major benefits of covering over this stretch of track and converting it to public parkland include:

The precinct around Stephens Rd and Gloucester St doesn’t have any local parks that you can easily walk to without crossing a main road. Covering over the train line would create a 1.1-hectare public park, with sections that are flat enough to kick a ball or play some cricket. 1.1 hectares is roughly the same size as the main football field at Davies Park, West End. The park could feature a massive all-ages playground with different elements targeted at different age groups. 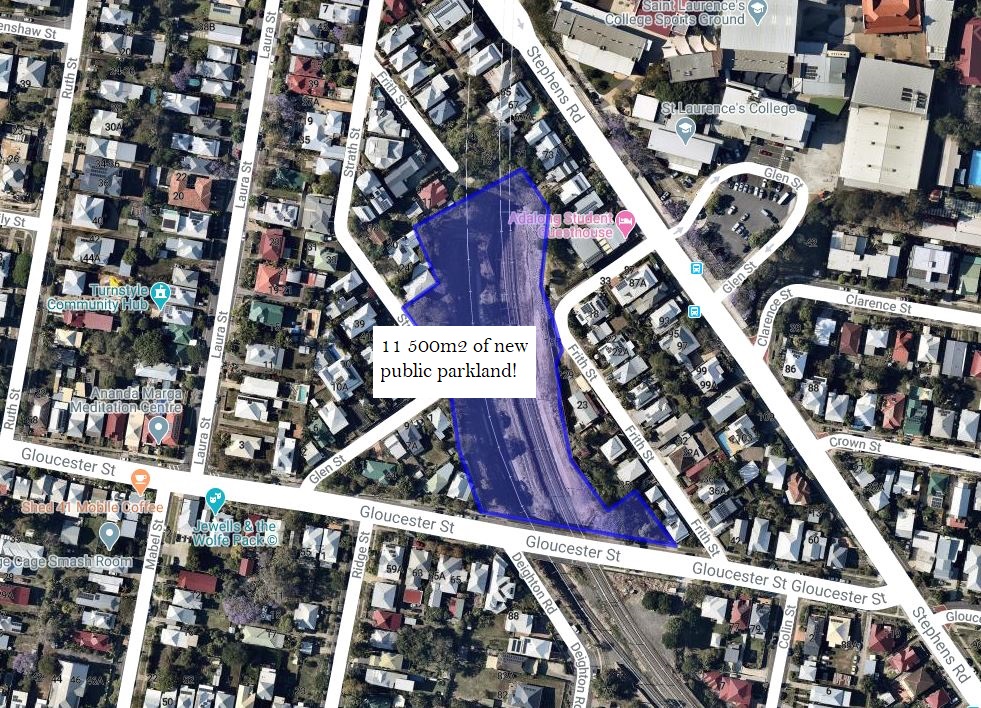 Creating a green spine through this neighbourhood on the edge of Highgate Hill and South Brisbane could be the first step in a series of linked parks and pathways following the alignment of the train line through to South Brisbane, to dramatically improve pedestrian connectivity.

This idea has been suggested by local resident and environmental engineer, Associate Professor Peter Pollard, who has also proposed that some of the material used to fill up the space above the new tunnels could come from the nearby Cross River Rail excavation. This would potentially reduce the cost and environmental impact of trucking out and disposing of all that excavated fill material.

Of course, you would also want a few metres' depth of decent-quality soil over the top, so that some of the land could be used for fruit trees and a community garden.

This is an amazing opportunity to turn a noisy barrier within the urban landscape into a green community hub. This space would be twice the size of the park at the top of Highgate Hill, and would have room for a whole range of activities and facilities.

I imagine it primarily serving as a well-vegetated quieter park for local residents to walk the dog, hold a picnic, or hang out with friends to escape the hustle and bustle down along the main roads.

It could also serve as a quiet green retreat for patients, family members and staff from the nearby hospital precinct who want to avoid the higher-intensity vibe down at South Bank and the riverside parklands.

Everyone I’ve shared this idea with so far has said something along the lines of: “That’s brilliant! And it seems so logical. Why hasn’t this happened already?”

The main reason is that even if you use precast tunnel segments that you drop in and connect up, it would still probably cost at least $3 million dollars, and the train line is actually State Government land. So it would require a bit of collaboration between State Government and Brisbane City Council. But although $3 million sounds like a lot of money, it’s actually very good value considering that it would create roughly $20 million worth of public parkland. 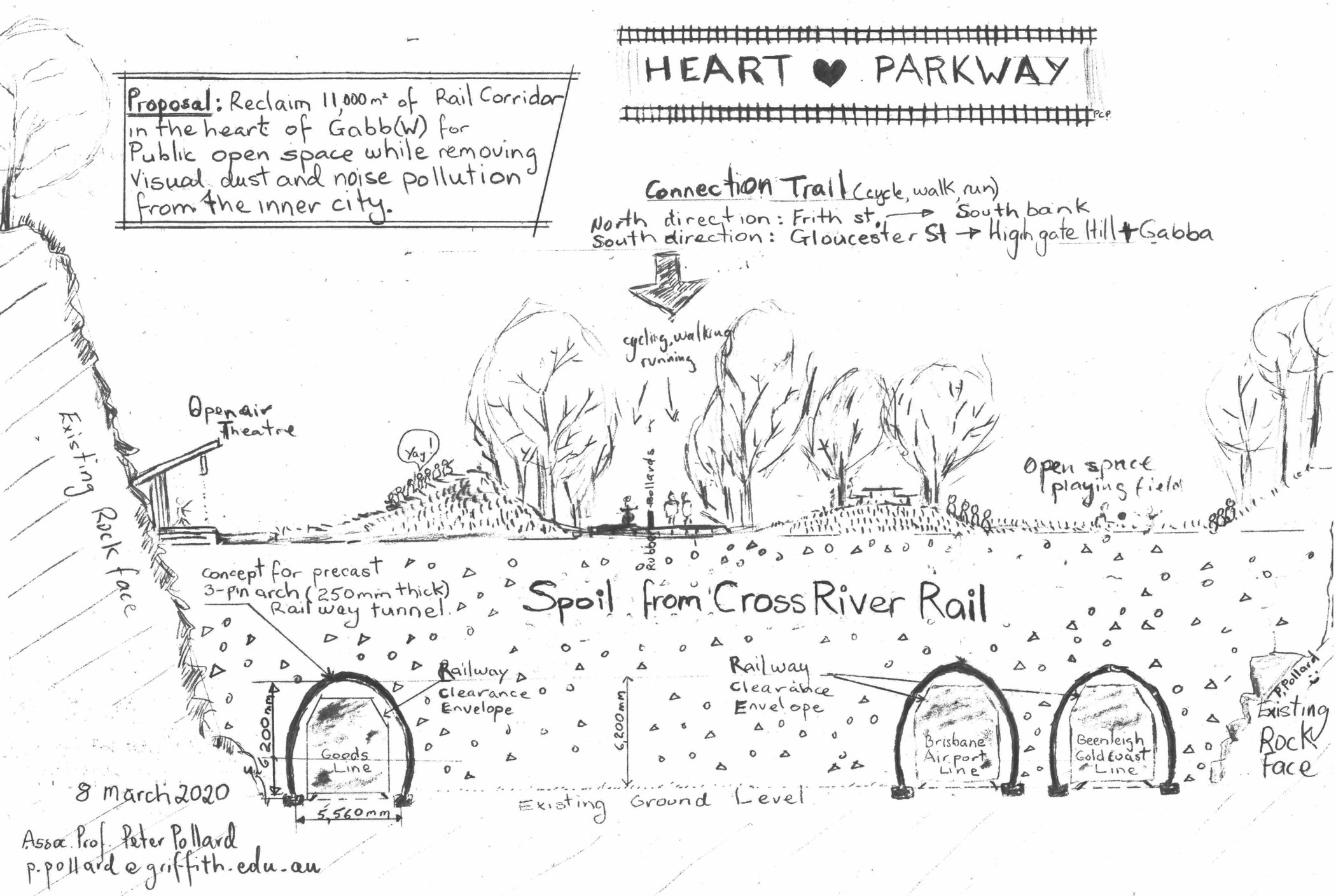 If we can successfully implement this approach of cut-and-cover train tunnels with parkland above, there are many other neighbourhoods where we could roll out this model. There are other stretches of low-lying train line running through many inner-city suburbs where green space is in short supply.

Obviously we also need council and the State Government to buy back more land to create new public green spaces, but covering over train lines also offers the extra benefits mentioned above. Reducing noise pollution and air pollution from these busy train lines would dramatically improve the quality of life for thousands of residents living within several hundred metres of the train tracks, and direct pedestrian pathways avoids residents having to walk the long way around to get across the tracks.

If you support this idea, please share it around, and tell your friends to vote for the Greens!