Hundreds of cyclists will stage a temporary die-in on Victoria Bridge tomorrow in response to a Brisbane City Council proposal to reduce cycling access over the Victoria Bridge.

As part of a mass bike ride through the city, residents will temporarily occupy the Victoria Bridge, closing it to general traffic but leaving it open to buses. Residents will hold a 1-minute silence for cyclists killed in car accidents, followed by the mass die-in. A die-in is where cyclists lie down with their bikes and mimic the carnage of a major accident, to symbolise how dangerous riding on roads without separated bike lanes can be.

Residents are concerned that council has failed to invest sufficiently in separated bike lanes throughout Brisbane, and are particularly frustrated that as part of the Brisbane Metro project, BCC is proposing to reduce bike access over the Victoria Bridge rather than increasing it.

“Council proposes to remove the existing on-road bike lanes, but is also removing the pedestrian crossing at the northern end of the shared footpath,” Jonathan Sri, Councillor for the Gabba Ward said. “These changes will force more cyclists onto narrow footpaths, increasing conflict between bikes and pedestrians.”

“Redirecting cyclists via the Kurilpa and Goodwill Bridges will result in more commuter cyclists mixing it with pedestrians along the South Bank riverfront and the footpaths of George Street in the CBD.”

“If we don’t get this bridge redesign right, we’ll end up spending a lot more money to redo it down the track as more Brisbane residents take up cycling,” Councillor Sri said.

“We’ve recommended a number of alternative design solutions to council and we’re keen to work constructively to achieve a better outcome.”

“Considering that council also supports another pedestrian-only bridge being built nearby to connect to the mega-casino, surely we can find more room for bikes on a redesigned Victoria Bridge.”

“Protesting like this is a last resort, but council has consistently ignored detailed submissions and large petitions from residents calling for safer cycling infrastructure in Brissie.”

“Other cities around Australia are striking a better balance between different modes of transport, but Brisbane lags behind and continues to deprioritise walking and cycling,” Ms Ward said.

“We’re not just frustrated about this one bridge. We’re concerned about poor outcomes and lost opportunities across Brisbane.”

Local resident Joanna Horton rides to work across Victoria Bridge via the on-road bike lanes and says it’s the shortest route between West End and her workplace in the Valley.

“Buses are still too expensive, and the alternative cycling routes are a lot longer, so reducing bike access over this bridge means people like me are more likely to drive via the Grey Street bridge.”

Councillor Sri says he hopes the turnout will remind council that there are hundreds of residents who would like to ride into the CBD if only it were safer to do so.

“It’s a mistake for council to focus only on current cyclist numbers. We need to think long-term and recognise that we can take hundreds of cars off the road if we make riding safer and more convenient.”

The protest ride will begin at 10:30am, Saturday, 22 July at the northern end of Russell Street near the South Bank ferris wheel. Cyclists will hold a 1-minute silence on the Victoria Bridge followed by the mass die-in between 10:45 and 11am. They will then ride through the city via Elizabeth, Creek and Adelaide Streets, ending at King George Square for another group photo opportunity. 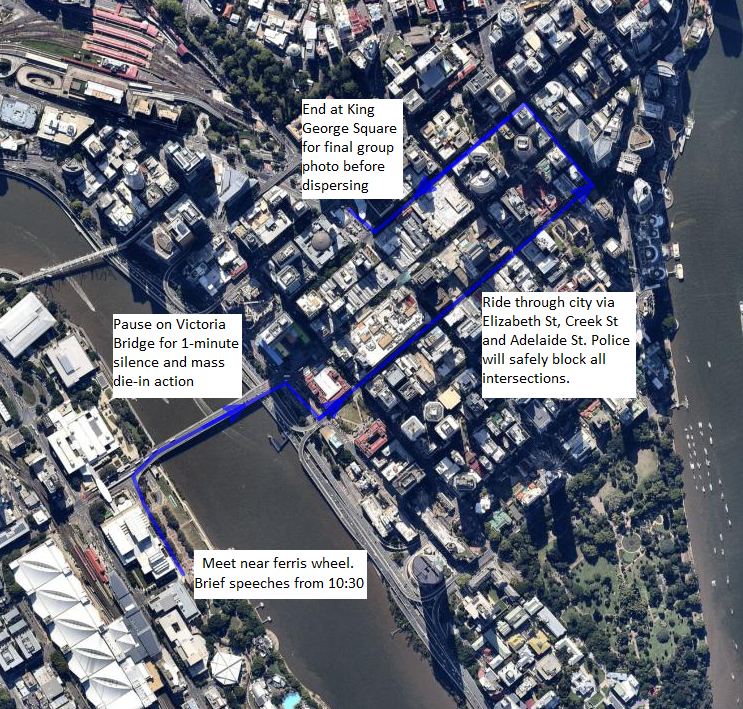