Proposed redesign of the Victoria St/Aldi Crossing in West End

After months of unanswered questions, Brisbane City Council finally got back to me with more detail about how they’re proposing to address safety issues at the intersection of Montague Rd and Victoria St near the ALDI crossing. Frankly, their plans are a little bit underwhelming. 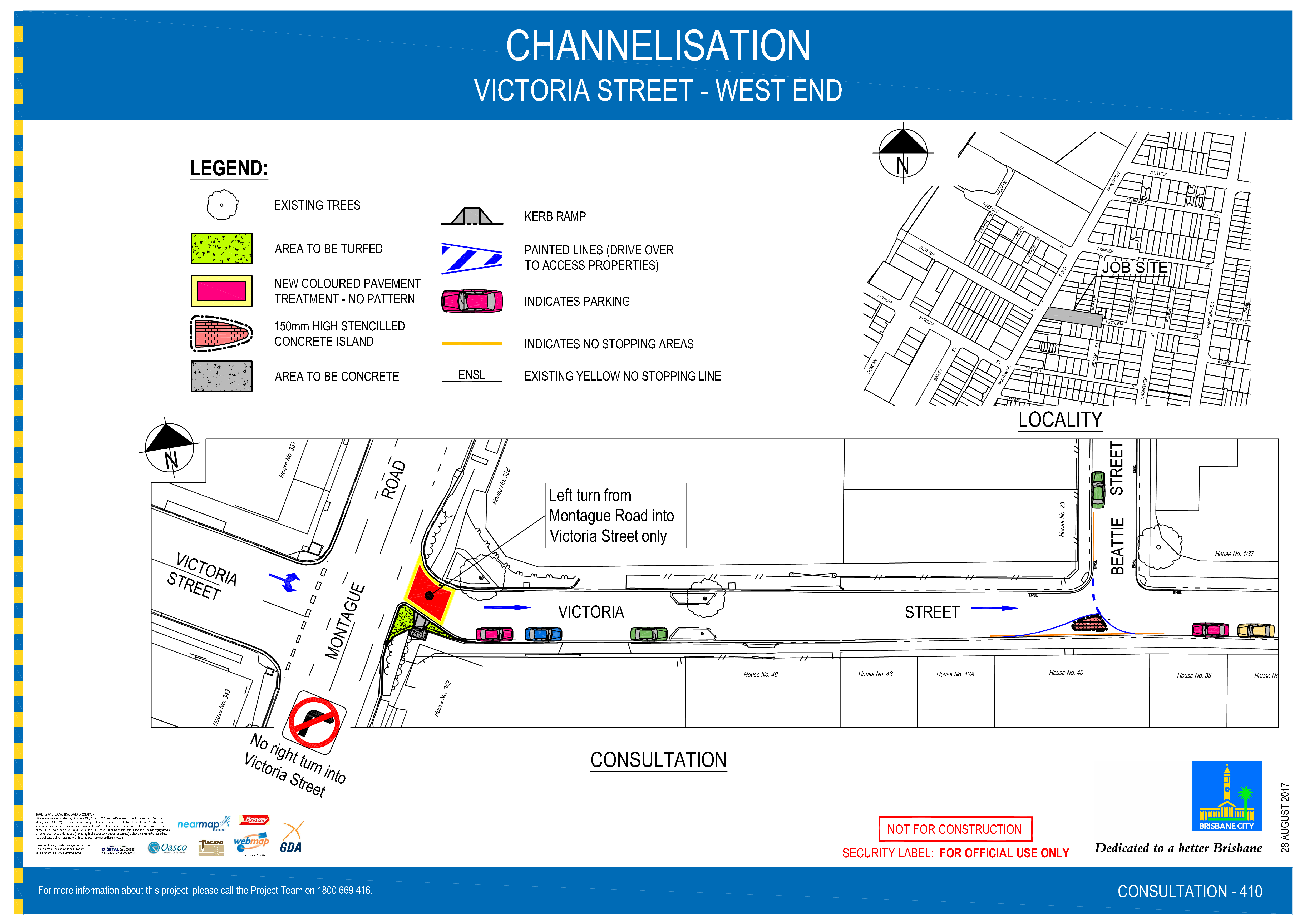 They are proposing a partial closure of the eastern side of Victoria St so that cars will be able to turn left into Victoria from Montague, but not drive straight across Montague from the far side of Victoria (where the ALDI is). This change will prevent some of the more dangerous right turn manoeuvres, and will also stop a lot of rat-running down Victoria. However it won’t really improve the safety of pedestrians crossing from one side of Montague to the other.

The council designers have said that according to current road design guidelines, they can’t put in a pedestrian crossing island at that location because the slope of the road and the proximity of the bus stops makes it an unsafe area to cross, and they can’t be encouraging people to cross at an unsafe location (ironic right?).

Instead, they’re installing a crossing island down the slope near Harriet St, and a second crossing a bit further along at Rogers St. 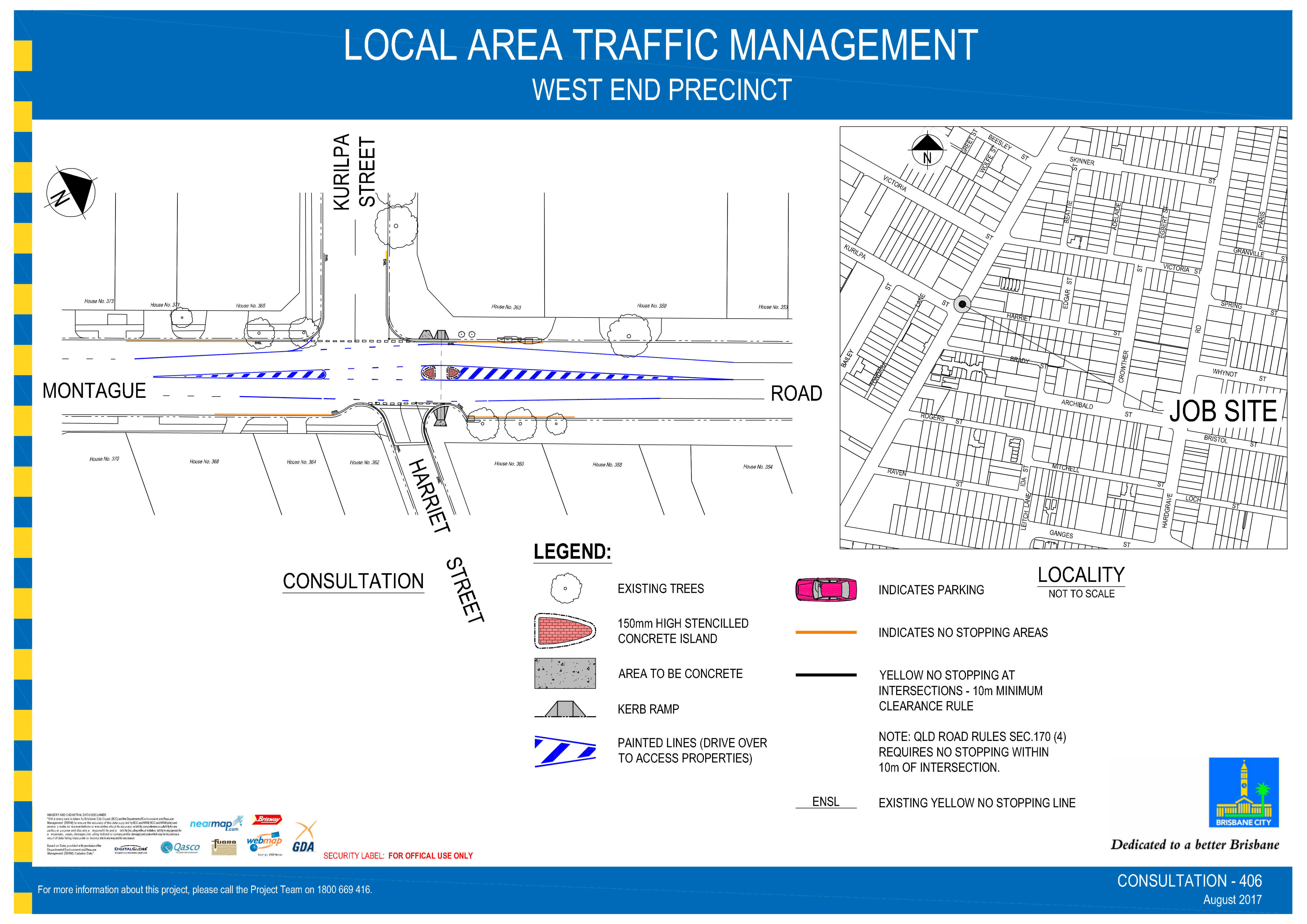 But obviously people will continue to cross near Victoria St because that’s where the bus stops, the ALDI supermarket, and now a new childcare centre are located.

Based on current traffic volumes and speeds, nothing short of traffic signals is going to make the intersection safe and convenient. Given the volumes of traffic we’re talking about, I think the cost of lights is justified. There are many demographics – most notably people with impaired vision – who simply cannot safely cross a busy road unless the crossing design gives pedestrians priority. Crossing points with central pedestrian refuge islands like the one proposed for Harriet St still require pedestrians to give way to motorists rather than the other way around, and this isn’t going to be enough on a busy road like Montague as the population grows. More and more cars and buses will be using this corridor, and pedestrians who are crossing at Harriet St will still have to wait a long time for a break in traffic in order to cross to the central refuge island.

There are two basic reasons behind council's continual refusal to install traffic lights at this intersection. The first is that BCC is still very car-centric in its approach to transport planning, and is extremely reluctant to make any changes that will slow down the flow of cars. One of the main reasons that funding was allocated for traffic lights at Vulture St but not Victoria is that upgrading the Vulture-Montague intersection would increase vehicle flows, whereas the push for lights at Victoria St was mainly motivated by pedestrian safety concerns.

The other reason is that BCC spends too much money on major projects - such as the widening of Kingsford Smith Drive (approx cost $650 million) and the widening of 700 metres of Lytton Rd in East Brisbane (Stage One cost: $115 million) - and so doesn't have enough money for smaller local projects. This tendency to prioritise big flashy projects seems to primarily be a politically motivated decision to attract as much media coverage as possible. Small pedestrian safety upgrades aren't as newsworthy as big, sensational road-widening projects, and so they are deprioritised. As a result, ordinary residents miss out, and will continue to risk dashing across busy roads like Montague just to get to the shops or the local childcare centre.

So for now, I’m going to support council’s proposal to partially close off the eastern side of Victoria St and install a pedestrian crossing island at Harriet St, but I see this as a short-term interim step rather than a permanent solution. Thousands of people are moving into apartments along Montague Road, and they need an option to safely and conveniently cross from one side to the other without having to walk all the way up to the soon-to-be-installed lights at Vulture St. Petitions and submissions have failed to shift council's priorities regarding this intersection. Further civil disobedience seems to be our only remaining option.