Traffic lights at last for the Victoria St-Montague Rd intersection!

Council has confirmed funding for the installation of traffic lights at the intersection of Montague Rd and Victoria St, West End. This is a huge win that I've spent several years advocating for. All the protests, petitions and speeches in council are finally paying off.

As explained in older posts, the slope of the road and the volume of vehicles moving through this intersection means that it's very difficult for council to make this intersection safe for pedestrians to cross without traffic lights and a full re-design.

BCC has said that the redesigned intersection will include dedicated bike lanes along Montague Rd, but has not confirmed whether these will include any kind of physical separation.

Here's the draft concept design they've produced. You can find more info about the project and email feedback to council via this link. 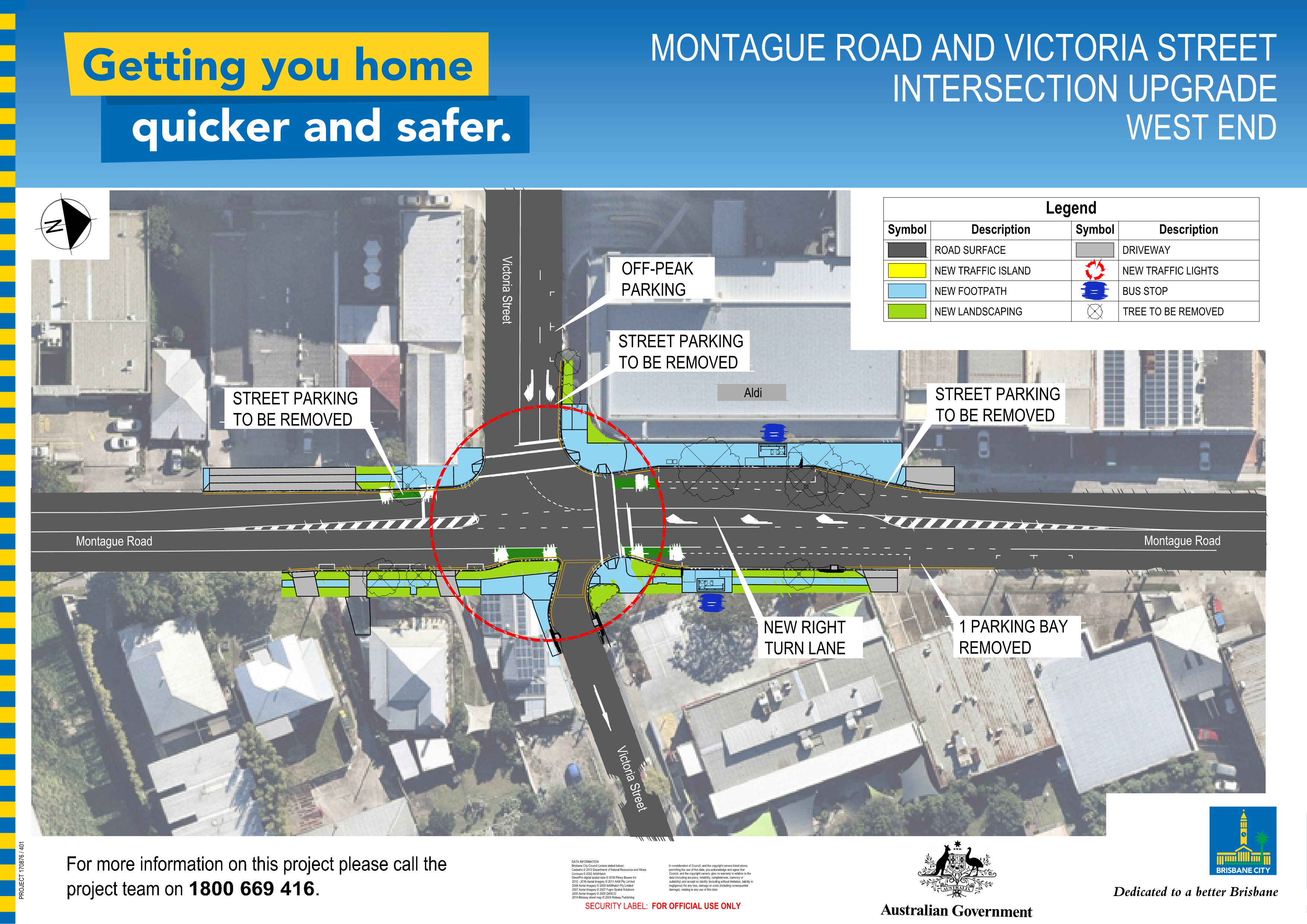 One of the big questions for the design of this intersection is how much time and priority will be given to pedestrians over cars. For example, the Vulture-Montague intersection has a suboptimal design outcome for pedestrians (with a pedestrian crossing only the south-west side of the intersection) in order to optimise motor vehicle flow.

How long will pedestrians have to wait to cross the road at Victoria St?

How long will the lights stay green for?

These are key questions that council's project team will currently be considering, weighing up the need to reduce wait-times for pedestrians with the desire to maintain traffic flow. You can provide your feedback by emailing [email protected] (you can also CC my office in at [email protected] to keep me in the loop).

Personally, I think that given the high volume of pedestrians who cross in this area, greater priority should be given to pedestrians, so that you don't have to wait as long for the lights to change.

Buses continue to be held up in general traffic along Montague Road, and so I've asked council to explore whether dedicated bus lanes or a 'bus jump' can be included through the intersection. This would allow buses to sneak ahead of queued traffic and reduce travel times for bus passengers. The limited width of the road corridor will be a key limiting factor here, and based on the draft concept design, it seems council is pretty reluctant to try this approach.

This intersection redesign is incredibly expensive and will be a long, slow project. Just over $4 million has been allocated in this financial year's budget, and the rest of the money will be allocated next year once the project is underway.

The table in the image below shows a comparison of the cost breakdown of the recent Vulture St-Montague Rd intersection upgrade (total cost $5.2 million), and the anticipated costs of the Victoria St-Montague Rd project (upwards of $10.4 million). Initially, council said the project would cost $11 million, but that figure has been reduced slightly in response to my most recent questions to council. It appears that costs for redesigning the Victoria St intersection are significantly higher due to the need to relocate above-ground services like power poles, as well as underground services like drains, sewerage pipes and phone cables. As discussed in more detail below, this project shows how difficult it is to deliver essential infrastructure in constrained inner-city environments once private development on neighbouring sites has already occurred. It would have been much better if council had had the foresight to require traffic lights to be installed at the time the ALDI Supermarket was first approved. 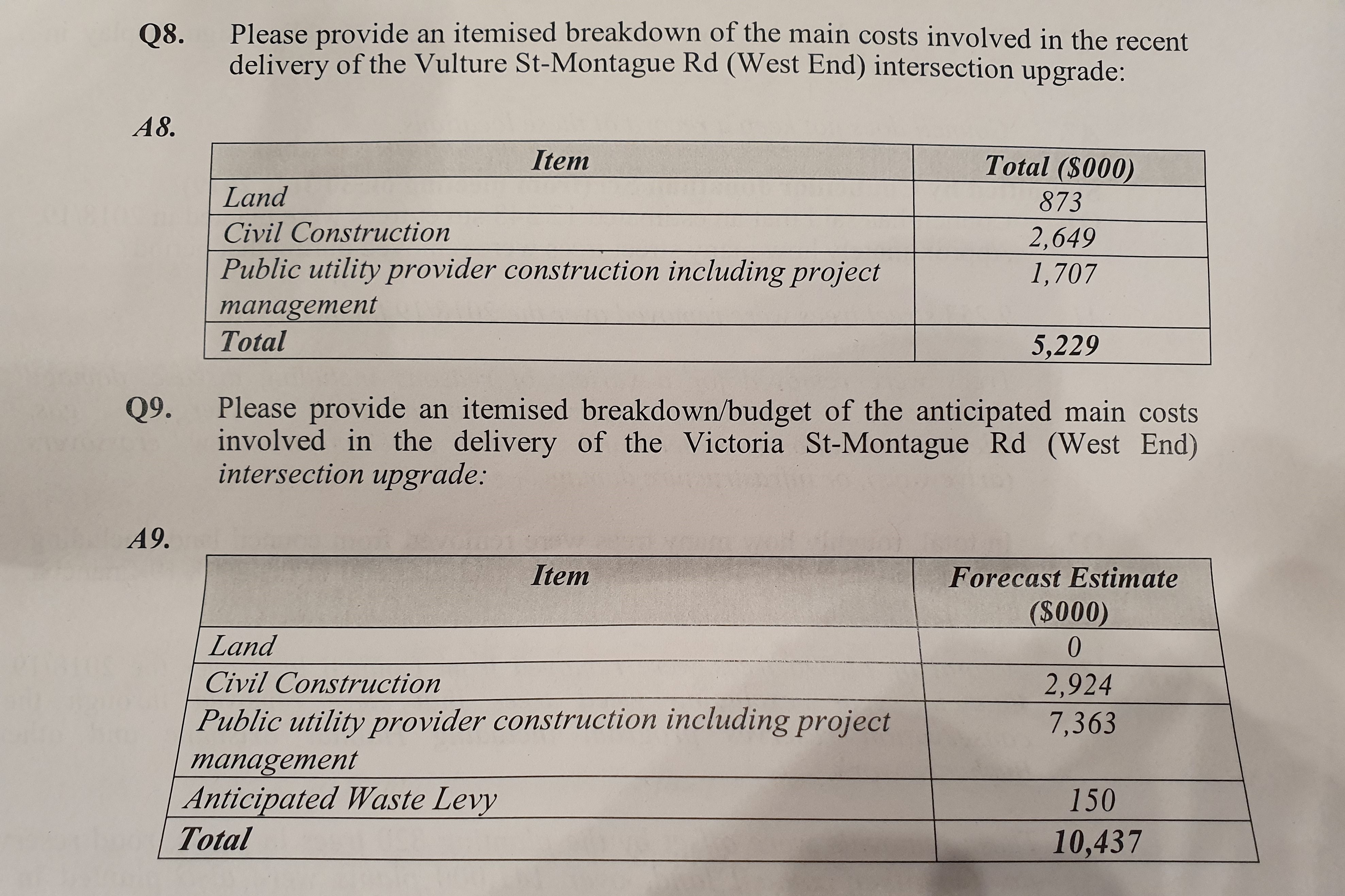 I learned something last week that has reinforced for me the need to completely rethink the way council plans for and delivers local infrastructure. In the annual council budget, I was very pleased to see that my advocacy has paid off with $4.4 million allocated to installing traffic lights at the intersection of Victoria St and Montague Rd. But we learned during the subsequent budget estimates session that the total estimated cost of upgrading this intersection is a whopping $11 million, and that this will be a two-year project with the rest of the money allocated in the following financial year. Even a budget of $4.4 million seemed surprisingly large just to install traffic lights, and the total projected cost of $11 million clearly raises a lot of issues.

I’ve written previously about why infrastructure isn’t keeping pace with rapid development. At the moment, council collects about $10 100 in infrastructure charges for 1 and 2 bedroom dwellings, and just over $14 100 for dwellings with 3+ bedrooms. So if a developer builds a large new apartment block with two hundred 1- and 2-bedroom apartments, council receives just over $2 million towards “Transport, community purposes and stormwater” infrastructure (that includes land for new parks, community facilities etc). These figures are capped by the State Government on a statewide basis, so even if a particular council wanted to increase infrastructure charges, current state government rules prohibit this.

A common criticism, which I still agree with to some extent, is that council collects money from developments in rapidly growing suburbs like West End or Woolloongabba, but then spends some of it in other parts of the city (mostly on road-widening projects).

But if you take the $5 million cost of installing lights at the Vulture St-Montague Rd intersection in 2018, plus the $11 million cost of the Victoria St-Montague Rd intersection, that’s the equivalent of infrastructure charges from more than 1580 new 1- and 2-bedroom apartments. Over the last few years, we’ve also had several million dollars spent in the Gabba Ward on park acquisitions and upgrades, new bikeways, new stormwater drainage infrastructure etc.

Nowhere in Brisbane is getting enough investment

What does it mean for our city when a single set of traffic lights can cost $11 million? How does spending on transport infrastructure compare to other possible projects in terms of value-for-money? For example, rather than upgrading a road to connect a residential neighbourhood to a commercial precinct with shops and services, could we put that money towards setting up some of those services closer to where people live? In inner-city areas where active and public transport is the priority, does the high cost of continuing to accommodate cars in the network justify the benefits?

I definitely think there are opportunities to reduce the cost of projects like the $11 million intersection upgrade at the Victoria St-Montague Rd intersection, but it involves tricky trade-offs. For example, if more of the construction work happens during the day rather than overnight, that would reduce labour costs, but mean more traffic disruption.

It would perhaps also be cheaper for council to deliver these projects in-house rather than outsourcing to private contractors who add in their own profit margins.

And perhaps most significantly, we could design these intersection upgrades for lower traffic speeds. The higher the speed limit is along a corridor, the wider the vehicle lanes are required to be. This means more expense is incurred in widening intersections to increase the lane width.

But the hard truth is that any kind of infrastructure project in a constrained inner-city environment is always going be particularly expensive. Whether it’s a park upgrade or new traffic lights or a new bike lane, finding space is harder (and thus more expensive) in denser neighbourhoods, and there are more flow-on impacts to other stakeholders.

So we might have to come to terms with the fact that any kind of significant road upgrade that’s focussed on maintaining traffic flow is going to be an inefficient use of money. There are many ways to design roads and intersections, and I’m increasingly leaning towards supporting simpler, slower transport corridors that feel more like shared zones or like the older narrower streets of European cities. Rather than pushing for complicated signalised intersections, should we be pushing for drastic reductions in the speed environment so that pedestrians can freely and safely cross a road wherever they want, safe in the knowledge that cars will slow down and give way to them?

Council will soon be releasing a draft concept design of the Victoria St intersection redesign. It will probably show an enlarged intersection where lanes have been added and the corridor has been widened so as to accommodate motor vehicle traffic flow. The $11 million price tag reflects the fact that council designers are trying to improve pedestrian safety without significantly reducing access and travel times for motorists. But maybe we need to rethink that approach.

When more and more residents are travelling via active and public transport, perhaps we should stop designing intersections to prioritise and accommodate cars. Perhaps we should be saying: "Sorry, we can't afford to widen this corridor to make room for you, so you'll just have to wait a bit longer while the pedestrians cross the road." This would mean cars might have to wait longer to turn into and out of Victoria St. It might mean that cars would have to give way to the bus when it's pulling in and out of the intersection. But it would encourage active and public transport in a neighbourhood where the road network simply can't handle more and more cars...