Whatever happened to the Victoria Street CityCat Terminal?

Every so often, our office receives an enquiry about what happened to the proposed CityCat terminal that was supposed to be installed at the end of Victoria Street in West End. And every time, we have to explain that it has slipped off the LNP’s priority list and that the council isn’t investing enough money in local public transport infrastructure.

Here's a link to the current petition.

I'm continuing to support and advocate for the installation of a new CityCat terminal to cater for the rapidly growing neighbourhoods to the west of Montague Rd. I believe the ideal location for a Citycat terminal should be determined based on a holistic masterplanning process of Riverside Drive, which takes into account future development, as well as other projects currently in the pipeline such as the West End-Toowong footbridge.

With the Toowong footbridge proposed to land in the vicinity of Forbes St and Ferry Rd, it might make sense for the CityCat terminal to be located at (or just to the north of) Beesley St, as opposed to at the end of Victoria St. If the CityCat terminal is a little closer to Davies Park, it can play a greater role in helping reduce congestion associated with events in the park (such as the Saturday morning markets).

A Victoria Street CityCat Terminal was identified as a crucial piece of public transport infrastructure in the South Brisbane Riverside Neighbourhood Plan, which came into effect back in April 2011 (note that this was after the 2011 floods). This is the same neighbourhood plan that up-zoned much of the West End Peninsula for high-density development and accelerated the flurry of apartment construction down along Montague Road.

Residents who bought apartments after this plan was introduced in 2011 were told by developers and real estate agents that the ferry terminal was coming soon. But it’s now 2017, and the nearest CityCat terminals to Victoria Street are on the other side of the river.

You can still see the ferry terminal listed in section 7.2.19.4.2 subsection 10(b) of the current City Plan. Unfortunately it’s no longer listed in the related ‘Priority Infrastructure Plan’. Building a new CityCat terminal right in the middle of the new high-density neighbourhood along Montague Road was supposed to help cater for the growing population. In fact, it was part of the justification for the upzoning – “Sure, we’re going to cram a lot more people into West End, but don’t worry about traffic congestion because we’ll be providing a new CityCat stop.” 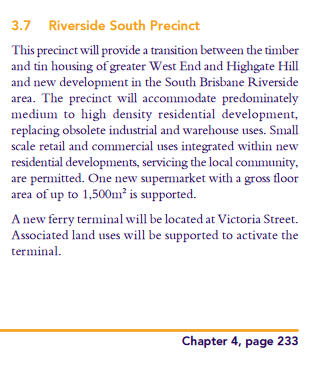 At the Public and Active Transport Committee meeting on 6 August, 2019, the committee considered yet another petition calling for the delivery of a ferry terminal for the western side of West End. The LNP's response was to say "there are no immediate plans to implement an additional high-capacity service in the West End area. However, Council Network Planners will continue to monitor all new developments at or near Kurilpa Point and will continue to liaise with their counterparts at TransLink."

Disappointingly, the committee - comprised of 4 LNP Councillors, 1 Greens Councillor and 1 Labor Councillor - voted 4-2 to take no substantial action in response to the petition.

At the council meeting on 11 September, 2018, I again used an opportunity in question time to push the Lord Mayor on this issue. Here's the transcript of that exchange...

Councillor Sri: Thanks, Madam Chair. My question is to the Lord Mayor. The approximate distance between the Orleigh Park and the South Bank CityCat terminals is five kilometres. On the north bank, the average spacing of terminals is only around 1.5 kilometres. In 2011, after the January floods, the South Brisbane riverside neighbourhood plan introduced or proposed to introduce a CityCat terminal for the western half of West End to cater for the rapid projected population growth for that part of the Kurilpa Peninsula.

Since that time we’ve had thousands of additional residents moving into that area, and now Montague Road is extremely congested and the Blue CityGlider is over capacity. There’s no more capacity on the Montague Road corridor itself to carry that growing population. So my question to you is: does this Administration have any plans to deliver a CityCat terminal for that western Montague Road side of West End, and if not, what is the main reason? Is it simply cost, or is it that an additional stop there is seen as inefficient from a network perspective?

Lord Mayor: Well, Madam Chairman, I thank Councillor Sri for the question. I think it’s a very reasonable question to ask. It is true that we have in that area the CityGlider service. It is a high frequency service. I remember when we first introduced the CityGlider, we thought that it would carry about 600,000 passengers the first year. It carried something like 1.5 million people.

So, Madam Chairman, now over 2 million, the Deputy Mayor informs me. In terms of Montague Road itself, Madam Chairman, I believe that the Glider still has a good capability to carry passengers, and we believe also that the Metro will assist in terms of the freeing up of capacity of road space, and will I think make it easier for those CityGliders to continue to operate.

So, Madam Chairman, it is weighing up the various needs that are on the river. We have, of course, a new CityCat that we’re out for design for, and all of these things will help. But I just say to you, Councillor Sri—

Councillor Sri: Just on relevance. The substance of the question is whether the reason the terminal hasn’t been delivered is primarily about cost or primarily about route efficiency.

Chairman: Thank you, Councillor Sri, and the Lord Mayor does have five minutes to provide that answer. Lord Mayor.

Lord Mayor: Thanks very much, Madam Chairman. It is primarily about—well, it’s a bit of both, to be frank, but its route efficiency is one thing that is certainly a factor on our mind. It’s one of the reasons why we are focusing at the moment on SpeedyCats because we want to try and look at creating with the stops that we have—every time we add a new CityCat stop in, it slows the service down more. That makes it less attractive from a time point of view.

So what we are intent on doing is to make public transport as fast as we can in terms of particularly the river transport, which is a slow form of transport. We want to speed that up, make it more attractive for people, and that is one of the reasons, as I say, we are introducing as a priority SpeedyCats. It is not to say we don’t think that another CityCat terminal here is important. We do, in the same way as we think a pedestrian bridge from Kangaroo Point to Edward Street is important. There is a case of the financial resources. We’ve just finished having a question about staff numbers and so forth, Madam Chairman, and getting value for money; we are intent on driving value to be able to do these sorts of very things. We think it is important.

You might recall that the number of CityCats out on the water has grown enormously in the last decade, and we want to continue to bring new vessels and, over time, new services as well. But we’ve got to do it smarter. We can’t just keep adding more and more stops along the route. People will stop using it because of the fact that it will just get too slow. That is the dilemma. I think it is a very genuine question. It’s a reasonable question in every respect, and it is one which is certainly exercising our mind, both in terms of the timing and resourcing. So, I thank Councillor Sri for that question.

So, reading between the lines of the Lord Mayor's response, the LNP still don't see the new CityCat terminal as a priority. It seems to me that they intend to wait until after the 'Brisbane Metro' project is completed, which is expected to change the broader bus network and the journey times of West End services like the Blue CityGlider. My personal view is that we need to improve public transport frequency and reliability in West End now rather than waiting another five or more years.

The 2011 floods were used as a justification for pushing back the timelines for construction of new ferry terminals, because so many existing terminals had to be replaced. But this delay in the supply of transport infrastructure didn’t stop the construction of new apartments full of residents eager to commute into the city or to Brisbane’s inner-western suburbs.

Montague Road is now heavily congested in peak hour. The existing Orleigh Park ferry terminal is a long hike from the high-density development around Victoria Street, meaning that the only public transport option available to local residents is the Blue CityGlider, which gets held up in general traffic. But BCC says that the Victoria Street CityCat terminal simply isn’t a priority.

Depending on a range of design variables, a new CityCat terminal would cost somewhere between $5 and $15 million. In the context of how much money developers and the council are making from the densification of the inner-city, this isn’t a huge sum. BCC is currently spending $115 million widening a 750-metre stretch of Lytton Road in East Brisbane to six lanes. They’re also spending upwards of $650 million widening Kingsford Smith Drive (people are still driving to the airport because the much-celebrated airtrain is too expensive). So to claim they don’t have the money is a bit weak. They have plenty of money for transport infrastructure, but they’d rather spend it widening roads than on public transport.

The Victoria Street CityCat terminal is an interesting case study of how council routinely promises to provide necessary infrastructure to cater for higher density development, but then fails to actually deliver.

This is symptomatic of a deeper failing in urban transport planning throughout South-East Queensland. Council uses the rhetoric that inner-city densification is more sustainable than outer-suburban sprawl to justify high-density urban development, but then continues to prioritise infrastructure projects that promote and reproduce a sprawling car-centric city.

But you can’t have it both ways.

If you increase population density in the inner-city, you have to provide the public transport infrastructure to support it. Otherwise inner-ring suburbs will become unliveable due to congestion and a hostile pedestrian environment, while everyone living in the outer burbs will still be stuck in traffic, no matter how many roads we widen.

We're hosting a petition for public transport improvements to service the western end of the West End Peninsula. Click here to sign it.

If you want to see greater investment in local public transport infrastructure like ferry terminals, it wouldn’t hurt to email the Lord Mayor at [email protected], but by the far the best use of your time is to engage with political campaigns and support candidates at both the local and state levels who advocate for more spending on public transport and less on widening roads. You might also like to check out this explanation of local infrastructure shortfalls if you haven't read it before.