Yes, the Queensland Greens are still a VERY white party

When I first put my hand up to be a Greens candidate, one of the key factors that motivated me was a frustration at how overwhelmingly white Australia’s political class is.

To state the obvious, our multicultural society is not reflected by equally diverse legislatures. Comparatively few Australian politicians identify as people of colour or First Nations, and even compared to other Anglosphere colonies like the US and Canada, our politicians are disproportionately of western European ancestry.

The Greens are certainly part of this problem.

If you add up all the Greens MPs around the country, we currently have a total of 36 state/territory/federal members of parliament, and all but 4 of those present as white Australians. We’re lucky that the relatively recent additions of Mehreen Faruqi and Lidia Thorpe to the federal team have balanced things out at that level a little bit, but even so, throughout the party, people of colour and First Nations peoples remain under-represented on all major internal and external decision-making bodies.

This issue of under-representation is particularly serious within the Queensland Greens.

The problem is just as pronounced in Queensland’s key internal decision-making bodies.

At the time of writing, all eight members of the QLD Greens management committee are white, and out of the 13 voting and non-voting members of the Queensland Campaign Committee, I’m the only person of colour. Despite making Greens membership free for First Nations peoples, we still have very few Aboriginal or Torres Strait Islander members who are active within the party.

Both in ongoing office roles and in temporary campaign roles, almost all our paid staffer positions in this state are white. While not direct employees of the party, the vast majority of staffers who end up working in the offices of elected Queensland Greens representatives are white, with only two or three exceptions. And an overwhelming majority of branch delegates to state council (the party’s peak decision-making body) are white. 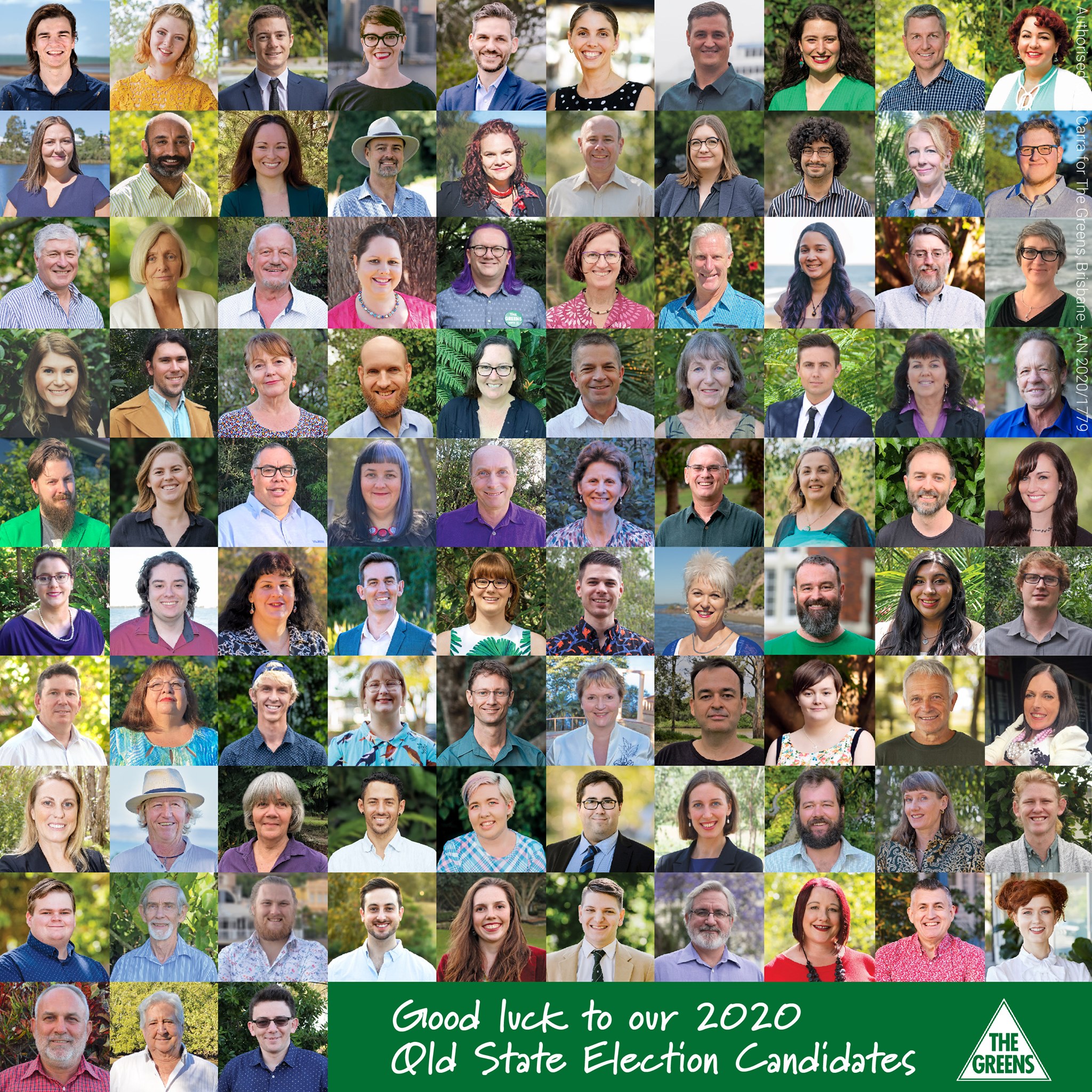 The faces of our 2020 state candidates (a diverse bunch in some respects, but not in others)

There are a range of factors that contribute to this phenomenon, and some of those are outside our direct and immediate control as a relatively small, volunteer-driven party. But we do have the power to correct for this imbalance. Doing so requires acknowledging the structural and systemic nature of the problem, and that systemic problems demand cultural and systemic change.

It’s easy to argue against the introduction of tangible, material changes to the way we operate as a party by saying that the solution is more meaningful community organising in solidarity with non-white campaigns and groups - that we need to build genuine connections with marginalised communities and welcome those people to actually join the Greens and step up their involvement.

But Greens members have been saying that for years.

Very few of us have actually done that work on any meaningful scale, and what little work has been done is largely thanks to those First Nations people and people of colour who are active within the party. I think this is largely because there’s no self-imposed pressure or firm requirement for the rest of us to do it. In a volunteer-driven movement, unless we set solid targets to achieve a particular goal, other stuff will end up getting prioritised.

I should add and emphasise that representation is only one piece of the puzzle. Simply getting a few people of colour and First Nations people elected into a fundamentally broken political system isn’t going to ‘fix’ all the problems that stem from systemic racism. And having a few more candidates and key decision-makers who identify as people of colour but who aren’t committed to truly transformative systemic change would also be self-defeating.

But in a country like this one, with such a culturally diverse population, and serious issues with ongoing racism and colonial imperialism, it’s obviously problematic that the Queensland Greens are led almost entirely by white people.

I’ve been highlighting this issue in internal party channels for a solid five years now. Recently, some power-holders within the party have started taking a few meaningful steps and introducing effective reforms to help correct this under-representation. But considering the scale of the imbalance, precious little has been done. The lack of action on this front compares very poorly to how the party stepped up a few years ago in response to concerns about women being under-represented as candidates in winnable seats, or the changes made to give rural areas greater representation on the party's most powerful decision-making committees.

If we want more people of colour to meaningfully engage with the movement at a grassroots level, those people need to see themselves reflected in the leadership. There are a range of barriers preventing non-white people from taking on leadership roles in the Greens. But as a party we’re not even taking the time to identify, understand and correct for those barriers, because we’re not required to.

I’ve heard some Greens members imply that this under-representation is not a significant problem, or that it’s a secondary issue that we can worry about later once we’ve won more seats. But this misses the point of why marginalised groups throughout history have insisted that a hierarchical electoral movement where all the most powerful positions are held by straight, white, able-bodied people is incapable of adequately representing and fighting for their interests.

Obviously a political party is never going to be wholly reflective of a population it seeks to represent. There are some groups in society who are so marginalised and oppressed that running for elected office or volunteering to serve on a campaign committee is unthinkable within the current social and political landscape. But "people who aren't of predominantly European ancestry" is a pretty broad group, and the fact that people of colour are so under-represented raises serious questions about whether we really are building a political movement 'for all of us.'

By this point you’re probably wondering where the handy list of straightforward reforms or immediately-implementable demands has gotten to. Spoiler: there isn’t one. This is a complex structural problem. Yes, there may be a need for quotas and progressive hiring policies. Yes, we probably need to offer more direct campaign support to people of colour who nominate as candidates. And yes, we need to articulate a political philosophy and vision that transcends whitewashed ‘universalism’. But the change we ultimately need is deeper than any of that.

I’m reluctant to articulate a checklist of simple steps to fix the almost-blinding whiteness of the Queensland Greens, in part because I don’t think it should be up to people of colour to do the difficult work of identifying and arguing for ‘solutions’ to under-representation, and partly because right now I don’t want to initiate a debate about the relative merits of particular suggested improvements. I simply want office-bearers who hold power within the Greens to identify and publicly acknowledge the gravity of the issue.

There’s little value entering into debates about how to fix a problem unless we all genuinely agree that it is a problem. My concern is that at present, a lot of people in the Queensland Greens will acknowledge if pressed that the party’s overwhelming whiteness is a bad look, but aren’t showing by their actions that they really think it matters.

Surely we can do a lot better…

I felt like this article needed another image to accompany it and couldn't decide what to use. So just for kicks, here's a shot of the 2021 cast of Neighbours... a VERY white TV show, yet arguably still more culturally diverse than the average QLD Greens branch meeting

Postscript: I anticipate that a few major party hacks will gleefully share this article in their own circles as ‘proof’ that the Greens are somehow less representative or less 'connected to ordinary people' than Labor/the Liberals are. If that’s you, maybe take a moment to reflect on your own party’s policy record. You can lecture others once your own MPs have stopped voting to lock up refugees, exploit migrant workers and keep people on welfare living below the poverty line.