The recent use of die-ins and other temporary blockades to raise concerns about pedestrian and cycling safety has raised legitimate questions about whether this is a constructive and useful tactic.

There’s no denying that temporary blockades frustrate motorists and potentially polarise the community. But their value must be understood in the context of a broader, multi-faceted campaign for change. Blockades are one important tool in a big diverse toolkit, and they can be valuable and effective alongside other forms of advocacy.

Right now in Brisbane, we have an abundance of community groups and non-profit organisations pushing hard to make our city more walkable and less car-centric. We’ve had dozens of petitions, letter-writing campaigns and submissions, with little to no impact. Advocates have also organised all kinds of community-building activities to legitimise and normalise cycling, and demonstrate that a bike-friendly city is possible and worthwhile. Various groups have hosted a range of workshops and policy forums where we create the space for nuanced, evidence-based conversations (usually, very few people come).

While these various tactics have all played a useful role in shifting mindsets and achieving small wins, the pace of change has been far too slow. The proportion of funding and resources dedicated to pedestrian safety and bike lanes remains tiny compared to the amount of money that is wasted on widening roads. Maintaining a seat at the table through diplomacy and compromise sounds nice, but you might actually be sitting at the kids’ table, arguing over crumbs while the rest of the cake is sliced up elsewhere. 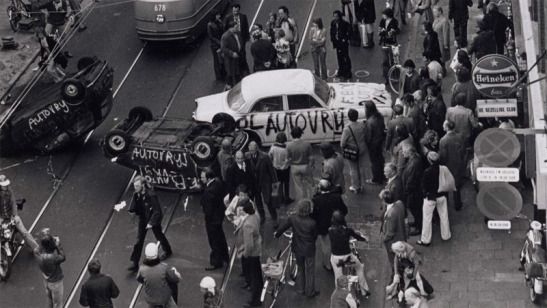 In Amsterdam in the 1970s, residents upended vehicles and permanently blockaded major roads to call for safer streets

When you consider the growing problem of traffic congestion, the health system costs of so many accidents, the billions of dollars which are wasted each year on ineffective road projects, and the desperate urgency to reduce fossil fuel emissions in order to minimise the negative impacts of climate change, it’s clear that we need some radical changes. Not only has tangible change been too slow, but on some indicators we’re actually moving backwards. Active and public transport rates have stagnated in Brisbane, and for some demographics, they’ve decreased significantly.

Over the last ten years, the multi-pronged push for pedestrian and bike safety improvements in Brisbane has been characterised by an absence of civil disobedience. It has also been characterised by a lack of significant and tangible positive outcomes. Brisbane City Council and the Queensland Government have grudgingly funded a few valuable projects, but much of the city remains hostile and unsafe for both pedestrians and bikes.

People are dying on our roads. Thousands more are being hospitalised. If preventable accidents were occurring at this rate in a private workplace, the business would be shut down. But the high rate of casualties on our roads has been accepted and normalised due to the lack of political pressure for change.

I hear a lot of road safety advocates talk about the wonderful infrastructure and pedestrian-friendly road culture in cities like Amsterdam, which are designed to prioritise pedestrians and bikes. Too often, those advocates forget or are unaware of the widespread and controversial civil disobedience actions that Dutch citizens organised throughout the 1970s in order to help make this happen. Civil disobedience wasn’t the only part of the campaign, but it was an essential and crucial element. To challenge the growing car-centric mindset in the Netherlands, residents blockaded roads, held up traffic and pissed off a lot of people. Without this activism, the pressure from car manufacturers, motorist lobby groups, oil companies, road construction companies, mega-mall developers etc would have led to Amsterdam becoming just like every other car-centric capital city. But the Dutch fought back, and it worked.

Controversial tactics like blockades create the space for conversation. They draw a huge amount of attention to an issue, both from the general public, and from key decision-makers. But their true value lies not in the immediate media coverage, but in the subsequent discussions they provoke. Some of these discussions are hostile and antagonistic, but many are constructive and valuable.

Civil disobedience also creates the negotiating space for other ‘moderate’ groups to articulate stronger demands. When politicians are confronted by disruptive, controversial protests, they will publicly dismiss the protestors as vocal fringe extremists, but will then simultaneously seek to appease and build stronger relationships with the very community groups whose petitions they previously ignored.

The fact that residents are so frustrated that they’ve taken to protesting about pedestrian crossings and bike lanes is not a good look for a city council. After the immediate news story is forgotten, the lasting memory in the collective subconscious is that people are unhappy with the council’s approach to road safety and transport planning. The desire to counteract that negative perception helps shift policy priorities and accelerates change.

A few people have suggested to me that rather than blockades, we should instead focus on actions that disrupt meetings in City Hall or Parliament House. While I think protests of that kind do have positive value, they generally get less media coverage and do not make as big an impact on the collective consciousness as protests that actively disrupt roads or commercial precincts. From what I've seen during my time as a city councillor, it's actually pretty easy for politicians to ignore a bunch of protestors who disrupt their meetings. It's much harder for politicians to ignore the broader sense of public discontent that civil disobedience actions on roads or in shopping malls can create.

While other cities around the world are actively embracing walkable neighbourhoods and safe bike infrastructure, Brisbane has fallen behind. The problem is not that our city is uniquely car-dependent, or that the influence of the motorist lobby is particularly strong. It’s that without the pointy-end, antagonistic protests, there’s not enough political pressure for anything more than minor incremental gains. And we can’t afford to wait another twenty or thirty years for the political establishment’s current bias towards cars to die out.

There probably won’t be a direct and immediate political response to the kinds of actions we’re organising. But a year or so from now, when political parties are deciding their policy platform and funding priorities for the next Brisbane City Council election campaign, the memory of these protest actions will subtly but significantly influence those big decisions.

If blockades were the only tactic used in advocating for change, I would agree that the division and hostility they cause might not justify the positive impacts. But as part of a multi-faceted strategy, they are effective and necessary.

The risk-averse advocacy groups who condemn and distance themselves from these kinds of controversial actions would do well to remember that the cities they point to – particularly in Europe and South America – as examples of good urban transport planning have had decades of controversial direct action in order to get to where they are today.

Divisive tactics will inevitably put off some people. But Brisbane cycling and pedestrian safety advocates have spent the last decade asking politely and carefully avoiding any action that might annoy or aggravate motorists, even as more and more of our friends end up in hospital. It hasn’t worked. We need to shake things up. Our lives depend on it.