Yes, big developers do get special treatment – particularly in terms of safety and environmental regulations

Residents often complain to me that they feel like Brisbane City Council has one set of rules for big developers, and another set of rules for everyone else. If a local resident wants to renovate their back deck or build a granny flat, they have to jump through all sorts of hoops. Meanwhile just down the road, a big developer can embark on a massive highrise construction project that blankets the neighbourhood in dust and wakes everyone up with early morning jackhammering, and it seems like the council doesn’t bat an eyelid.

This double-standard isn’t just speculation. It’s actually baked into the system. From the initial stages of rezoning neighbourhoods for different kinds of development, to the measly and tokenistic contributions that developers make towards local infrastructure… to the application and assessment processes for new developments, to defect checks and building certification… the entire planning and development framework is designed to facilitate and support the private property industry to make as much money as it can, with a minimum of regulation and oversight.

This is particularly the case when it comes to enforcement of safety and environmental health regulations regarding construction work impacts, such as out-of-hours construction noise, dust pollution, blocked footpaths, unsafe traffic control etc. 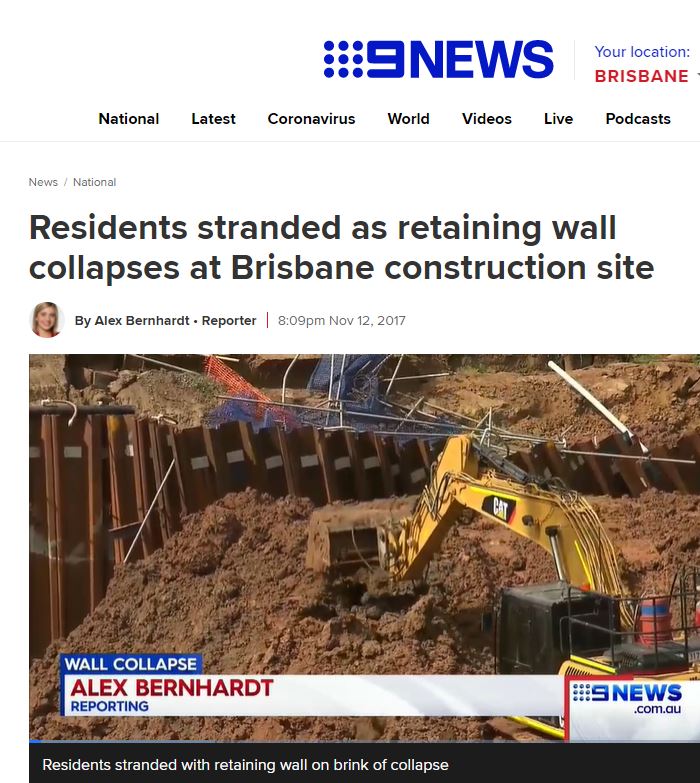 A split system for handling complaints

Most of Brisbane City Council’s enforcement work is undertaken by the Compliance and Regulatory Services (CARS) branch. This large part of council covers a broad range of responsibilities from parking infringements to barking dog complaints. If you’re renovating your house, and the tradies are starting work too early, or the temporary site boundary fencing is sticking out over the footpath, the CARS inspectors from the Built Environment Development Team will be called out.

But a few years ago, the property industry was getting frustrated that council inspectors were enforcing the rules rather than looking the other way. It can save developers a lot of money to illegally close off a footpath for temporarily storing building materials, or to start construction at 6am rather than 6:30am, or to direct heavy vehicles through a residential side-street rather than going the long way around via main roads. So constant attention from CARS officers was a threat to profits. In response, a new parallel system was set up during Graham Quirk’s time as mayor, currently called the ‘Building and Construction Management Team’ (and previously called the ‘Suburban Construction Management Team’). The BCMT doesn’t fall under the CARS branch of council. It’s actually part of the Development Services branch.

‘Educating’ developers rather than fining them

The LNP-dominated Brisbane City Council wanted to streamline its systems and make construction as simple and profitable for private developers. So the BCMT is not intended to function as a compliance and enforcement unit like the CARS inspectors. Officers are supposed to work collaboratively with developers to offer ‘education’ and ‘guidance’ about the rules and resolve complaints from residents without issuing fines or taking other forms of enforcement action.

This means that if a particular developer cheekily starts work early one day and wakes up the whole neighbourhood, BCMT won’t issue fines. They’ll just politely remind the developer that construction noise isn’t allowed in Brisbane before 6:30am (which is already way too early anyway) and let them off the hook.

If a developer takes over a parking lane, or cuts down a street tree, or closes off a street without getting the proper permits, BCMT will give them a friendly phone call, and instead of initiating enforcement action, will most likely support the developer through a fast-track process to get a permit for the thing they were already doing illegally. It’s almost like BCMT officers are working for developers to help them skirt around regulations, rather than working for council to enforce regulations on behalf of the wider community. Imagine if parking inspectors operated that way! 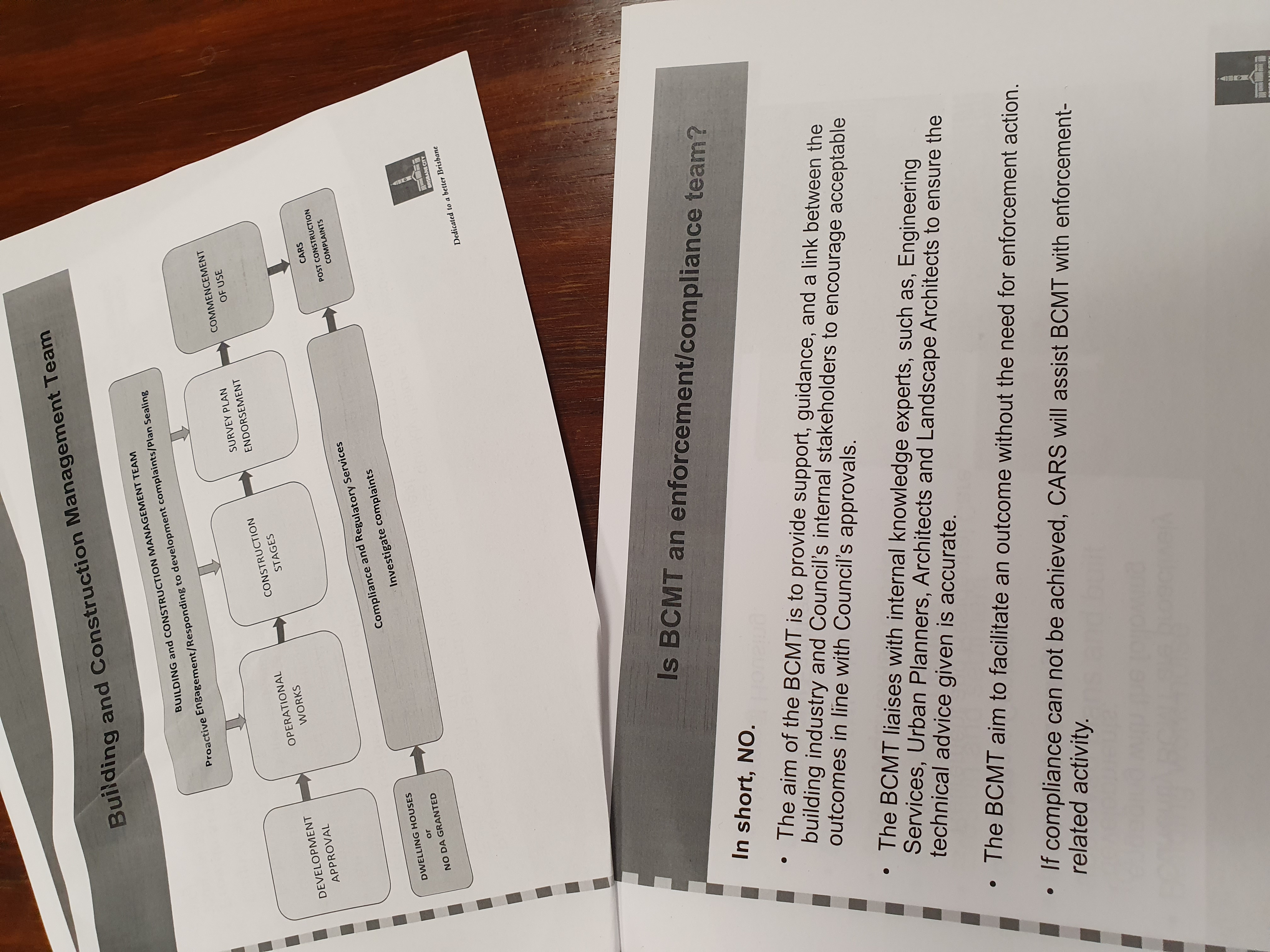 "Is BCMT an enforcement/compliance team? In short, NO." This image shows powerpoint slides from a council presentation explaining that BCMT focuses on 'support' and 'guidance' to the building industry rather than compliance.

Big developers get a friendlier framework

The real kicker is that if a complaint about something like dust pollution relates to a construction project for a single dwelling house (e.g. an owner-occupier rebuild) or to a site where there is no relevant development application (such as a small business that’s doing some minor renovations), it will still be dealt with by CARS inspectors.

In contrast, the Building and Construction Management Team – ‘the nice guys’ – are exclusively responsible for commercial developments and larger residential developments with more than one dwelling.

So owner-occupier renovators get inspected by CARS officers who are more likely to issue formal Show Cause notices and escalate to fines, whereas big developers get contacted by BCMT officers who are under explicit instructions to avoid using formal enforcement processes.

One important exception is that CARS still seems to have responsibility for erosion and sediment control i.e. inspecting complaints about muddy run-off from construction sites into creeks and stormwater drains. So if you report dust pollution from a big development site, it'll be handled by BCMT, but if you report that it's mud or erosion that's at risk of washing away, it'll be handled by CARS, and thus hopefully taken more seriously.

I should also note that BCMT is only responsible for inspecting council-approved developments. So if there's a large development that has been assessed and approved under some kind of State Government framework, CARS may still have the power to get involved. But the vast majority of big developments in Brisbane are approved by council, which means BCMT effectively acts to protect the developers from regulatory enforcement.

BCMT is not even resourced to properly investigate complaints

Although the Development Services branch of council is very well-resourced, the BCMT itself is quite limited in terms of staffing capacity. Unlike the Compliance and Regulatory Services Built Environment team, the Building and Construction Management Team generally doesn’t have many – if any – staff who work outside business hours. So if a resident is complaining that a developer is leaving noisy equipment running overnight, there’s no way for the BCMT to actually go out to site to verify the complaint – they are more likely to just take the developer’s word that the resident was mistaken. Unlike CARS, BCMT officers also don’t have the necessary equipment or training to measure air pollution levels, noise pollution etc. So they can’t collect evidence to support enforcement action even if they wanted to.

All this contributes to an environment where developers and construction companies rightly feel that they can get away with pretty much anything. It fosters a culture of entitlement and impunity where developers feel they deserve special treatment because they’re god’s gift to the economy, and major party politicians tend to acquiesce to increasingly bold demands from the property industry because it’s easier than pushing for a bigger change in strategy. This is a problem for Queensland and in fact the nation as a whole, because the property industry will then pressure other councils and state jurisdictions to also relax the rules, saying “well Brisbane City Council is giving us favourable treatment, so why aren’t you?”

We now live in a bizarre world of split realities, where the on-paper regulations that are technically binding rules are rarely enforced in practice. Individual council officers exercise broad discretion as to whether to respond to complaints by simply ‘educating’ a developer, or by issuing Show Cause notices and fines. This creates fertile ground for nepotism and corruption. If the BCMT officers build close personal relationships with particular construction companies or developers, there’s a very real risk that they’ll look the other way when residents complain about breaches of safety or environmental health regulations.

Brisbane City Council has evolved into a large, complex and cost-intensive bureaucracy that gives the illusion of regulating and monitoring issues that are important to residents, when in truth, teams like the BCMT are more like public relations exercises that shield politicians, developers and construction companies from accountability.