After multiple unsuccessful enquiries and eventually resorting to submitting formal document requests, we’ve finally secured copies of the feasibility studies that partially informed the bridge landing options that BCC has put out for public consultation.

We remain of the view that BCC ought to have provided more information about the possible bridge options right at the outset of their consultation process, to facilitate higher-quality, better-informed public feedback.

We still haven’t had time to read all of these documents in detail. They show that BCC and the private consultants considered a much wider range of possible bridge landing options, most of which were deemed less suitable for various reasons.

Importantly, the two more recent reports were drafted by private consultants for council, but it seems council officers working on the bridge projects also considered other factors and arrived at their own position. The six location options that BCC ultimately put out to public consultation suggest they agreed with the private consultants in some respects and disagreed on others. I actually think this is a positive sign in that it shows public servants (who are experts in their fields) were also thinking for themselves rather than just doing whatever the private consultants recommended.

In some respects, the documents are quite technical, and easily capable of being misinterpreted if you rush through them. In publishing them here, I want to encourage residents who read them not to cherry-pick or rely too heavily upon individual statements (such as the very rough preliminary cost estimates) and to consider them holistically.

After an initial look at these reports, one of my main concerns is that the feasibility analysis of various bridge options still gives a lot of weight to proximity to existing bus service routes, even though bus routes are comparatively easy to reconfigure.

When planning a bridge project costing in the range of $150 million, it makes sense to place a lot of emphasis on topography, and on the current locations of more expensive infrastructure that’s harder to relocate (such as train stations and riverwalks). But given that these bridges are likely to remain in place for decades to come, it’s short-sighted to decide the best place to land a bridge based on something as changeable as the locations of existing bus stops or bus routes.

Other important stuff to keep in mind when reading these reports: 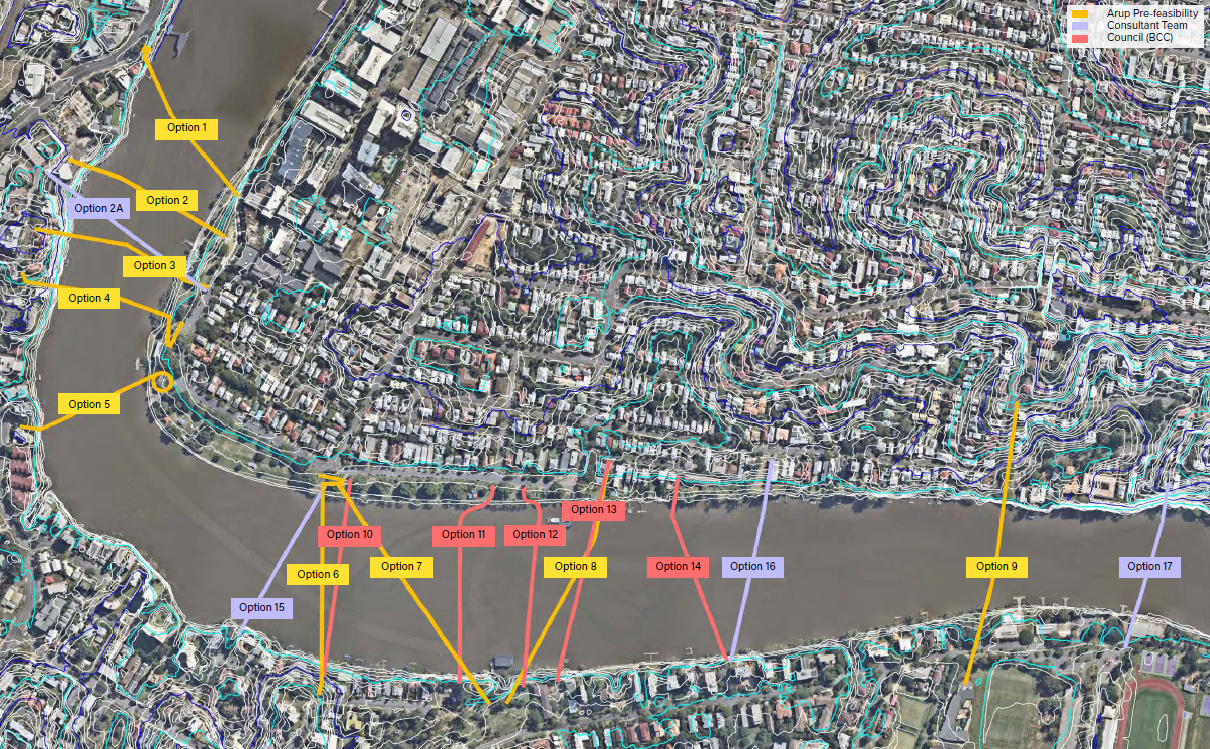 Personally I don’t think too much weight should be given to the recommendations and analysis in these documents. These kinds of studies exemplify a common (and, I would argue, flawed) approach at all levels of government, where political decision-making is outsourced not to the general public through deliberative and direct democracy processes, but to private consultants who apply their own values to what are essentially political decisions.

The options analyses in these documents, where different bridges are assigned scores to help rank their suitability, are highly subjective processes. Consultants seek to quantify some of the qualitative impacts and benefits of various options, but such exercises are always tainted by the values of the company in question.

For example, while one consultancy might see the creation of a concrete plaza leading up to a proposed bridge as a positive contribution to the public realm (and something which benefits the community), other consultants might see the proliferation of concrete and loss of actual green space as a detriment. Such questions are subjective and political. To pretend that they are politically neutral decisions that can be outsourced to ‘experts’ is to undermine the basic premise of democracy. So instead of treating such reports and analyses as definitive, we should recognise that they are merely the perspective of one particular company that has been paid to look closely at an issue or project.

Ultimately, it’s better if the community as a whole gets to make such decisions, but we still need access to enough detailed information to inform our decision-making.