Cracks in the Concrete Speech (August 2016)

I gave this speech at our Cracks in the Concrete Ideas Fiesta on 27 August, 2016. It's interesting to look back on it now and think about how relevant these ideas still are three years later...

The modern metropolis is the engine room of consumption and competitive capitalism. It shapes every aspect of our lives, including the broader environment beyond the city outskirts. It’s a temple to individualistic greed and mind-numbing bureaucracy.

But it’s also the crucible of counter-culture and resistance. Of innovation and creativity. Of collective action and spirited dissent.

If we yearn for cultural and political evolution, for a democratic, egalitarian, more caring, more sustainable society, that transformation must surely begin here in the city.

We know that lasting social change starts locally, and comes from the bottom up.

The great global challenges and battles of our generation will be fought and won on the streets of unassuming cities like Brisbane.

The struggles for Aboriginal sovereignty and refugee rights are struggles over who controls the metropolis, and who is permitted to live in it.

The struggle for action on climate change is a struggle for sustainable architecture, for renewable energy and tree-lined streets, for local food networks, public transport, bike lanes and pedestrian safety.

The struggle against neoliberalism is a struggle for the decommodification and deregulation of public space, for democratic, collective control of urban planning, for the triumph of local worker-owned businesses over corporate chain stores, for public housing, and for the treatment of shelter as a human right and not a commodity.

The struggle for a less selfish, less racist, less sexist, less ableist society is a struggle for the sanctity and preservation of diverse urban communities, for stronger renters’ rights, for building designs that don’t separate and squeeze us into lonely little concrete boxes, for community centres, homeless shelters and the free exchange of ideas between strangers that isn’t mediated through facebook algorithms or the mass media.

A more utopian Brisbane feels tantalisingly within reach. We can all draw it in our minds. Street art instead of grey concrete. Music and poetry instead of jackhammers. Weekday afternoons spent with friends at barbeques by the river instead of sitting at an office desk under fluorescent lights. Smooth, efficient public transport, and every shop and apartment powered by renewable energy. A beautiful, green city, where fruit trees line the footpaths and car fumes are a distant memory. And where you don’t have to stare at your laptop screen for ten minutes waiting for the next episode to buffer.

But the barriers to change seem tall and imposing.

Developers and lobbyists massage the planning system like playdough, manipulating its rules and codes to suit their bottom line. Well-meaning politicians and public servants feel shackled by bureaucracy, and struggle to imagine a world beyond spreadsheets and media soundbites.

The only mechanisms we have to engage with the system are time-consuming, demoralising and highly bureaucratised. We fill out forms, permit applications, petitions and surveys like prayers to an invisible god, dimly aware that positive outcomes are only likely when our interests as residents happen to coincide with those of the corporate sector. Even when those in power agree with the need for change, they take far too long to implement it. I’m sure many of us in this room can think of examples where an urgently needed bike lane or wheelchair ramp could have been installed in a matter of weeks, but instead took years.

We can vote for the good guys each election, but while power remains centralised in city hall, parliament house, and the top-floor offices of big banks and corporations, the needs and perspectives of ordinary citizens will be little more than an afterthought. If there’s profit to be made from influencing the political system, those at the top of the hierarchy will always be susceptible to corruption.

Our long-term goal must be to decentralise power and give local communities greater control over their own neighbourhoods.

The few months I’ve been a city councillor have emphasised for me that if we spend long hours writing policy submissions and lobbying those in power, we can achieve modest incremental policy gains on some issues. However, such reforms are vulnerable to being overturned if they tend to conflict with the interests of the big end of town.

Building designs that discourage people from interacting with their neighbours and the public sphere further undermine the formation of diverse social networks that can challenge neoliberalism. Smaller households, and the lack of shared communal spaces mean many of us are no longer practising the social skills of negotiation, cooperation and collaboration that are crucial for addressing the great challenges facing our world. We might be living more densely, but we’re not necessarily living in communities.

Deeper, lasting change requires a more radical approach. It requires a social movement. And here in Brisbane, the floodwaters are already rising. People are hungry for change. The frustration at how little control we have over our city, even over our own streets, is palpable.

Those of us who are passionate about these issues need to see and understand ourselves as being part of the next chapter in the story of radical Brisbane. Our long, proud historical lineage of social activism stretches back well beyond the Bjelke-Petersen years.

Brisbane is a radical city. Underneath the sanitised public squares, tacky corporate billboards and materialistic apathy, there remains a strong cultural memory of cynicism towards the establishment, scepticism of power hierarchies and anti-elitism. In particular, there’s a solid track record of ordinary citizens defending their rights to use public space and exercise more control over the future of their neighbourhoods. I’ve had 90-year-old women with pearls and posh accents pull me aside at community events and say conspiratorially that it’s about time Brisbane had a couple of proper sit-ins.

When positive change comes about as a result of collective action, neoliberal attempts to subsequently undo or reverse that change are significantly less likely to succeed than if change was driven primarily by well-meaning bureaucrats and policy wonks.

The challenge for us now is to identify forms of collective action that are strategically effective, and have a reasonable chance of success. There’s little to be gained from burning people out on unwinnable campaigns. But we should also think laterally about how we define success. For example, a blockade that’s ultimately broken up by the police can still help remind the government and corporate developers that it will cost them more to ignore and marginalise residents than it will to work with us.

Sometimes the battle is worth fighting, if only because to stand by and do nothing would encourage the corporate sector to become even greedier and more exploitative. But crucially, these collective responses to neoliberalism must be fun, and must embody the ideals and values we’re fighting for.

In every campaign we organise, we have to be mindful of the long-term goals we’re working towards. Emma Goldman, the Russian anarchist and feminist, is commonly credited as saying “A revolution without dancing is not a revolution worth having.” It’s a glorious sentiment, but I think her exact words are even more potent. She said, “I did not believe that a Cause which stood for a beautiful ideal, for anarchism, for release and freedom from convention and prejudice, should demand the denial of life and joy.”

This is the sentiment we need to hold in our minds as we seek to free Brisbane from the clenched claws of corporate capitalism.

So where are the openings and opportunities for a right to the city campaign here in Brisbane? Clearly housing affordability is a major issue. If the apartment boom starts to wind down, the next frontier will not be stopping unsustainable mega-projects, but fighting to ensure that new apartments are rented out cheaply rather than left sitting empty.

The cost of housing is a major barrier against more Brisbanites taking action for positive change. Many of our friends and family members are too busy working to pay the mortgage or the rent to get involved in community gardens, refugee support networks, or political discussion forums. Actions which challenge the systemic treatment of housing as a commodity, while simultaneously providing free or cheap housing for people on lower incomes, offer a trajectory out of neoliberal capitalism.

Currently in Brisbane, there seems to be a need for a well-organised non-profit real estate agency to match those who require affordable housing or workspaces with owners who don’t mind dropping their rent for a good cause. I think there’s also a need for a squatting campaign that could render visible the immoral social injustice of governments and councils leaving publicly-owned housing unoccupied.

A direct action campaign targeted at the Queens Wharf mega-casino would help unite residents from across the city and across the political divide. Using direct action to support existing community campaigns against unsustainable road-widening projects would assert our right to greater local control over infrastructure spending.

Perhaps most importantly, a positive campaign to use and activate public space would reinforce our claim to determine for ourselves how these spaces are used, and would resist the commodification and coercive state control of the public sphere.

If the political system is not yielding positive long-term outcomes for our city, and is denying ordinary residents genuine input on key decisions, then it is neither democratic, nor socially just. If we accept that the corporate sector is undemocratically manipulating the political sphere, direct action becomes one of the few meaningful options left open to us.

We Brisbanites are powerful people. But we need to recognise that seeking advance written permission from the police to hold a non-disruptive footpath protest is not civil disobedience, and amounts to little more than ripples in a stagnant pool.

We have the ability, and an urgent need, to transform Brisbane into a more sustainable, more equitable city. The climate is already changing. The housing affordability crisis is already disrupting our communities. We can’t afford to wait for the next election cycle. 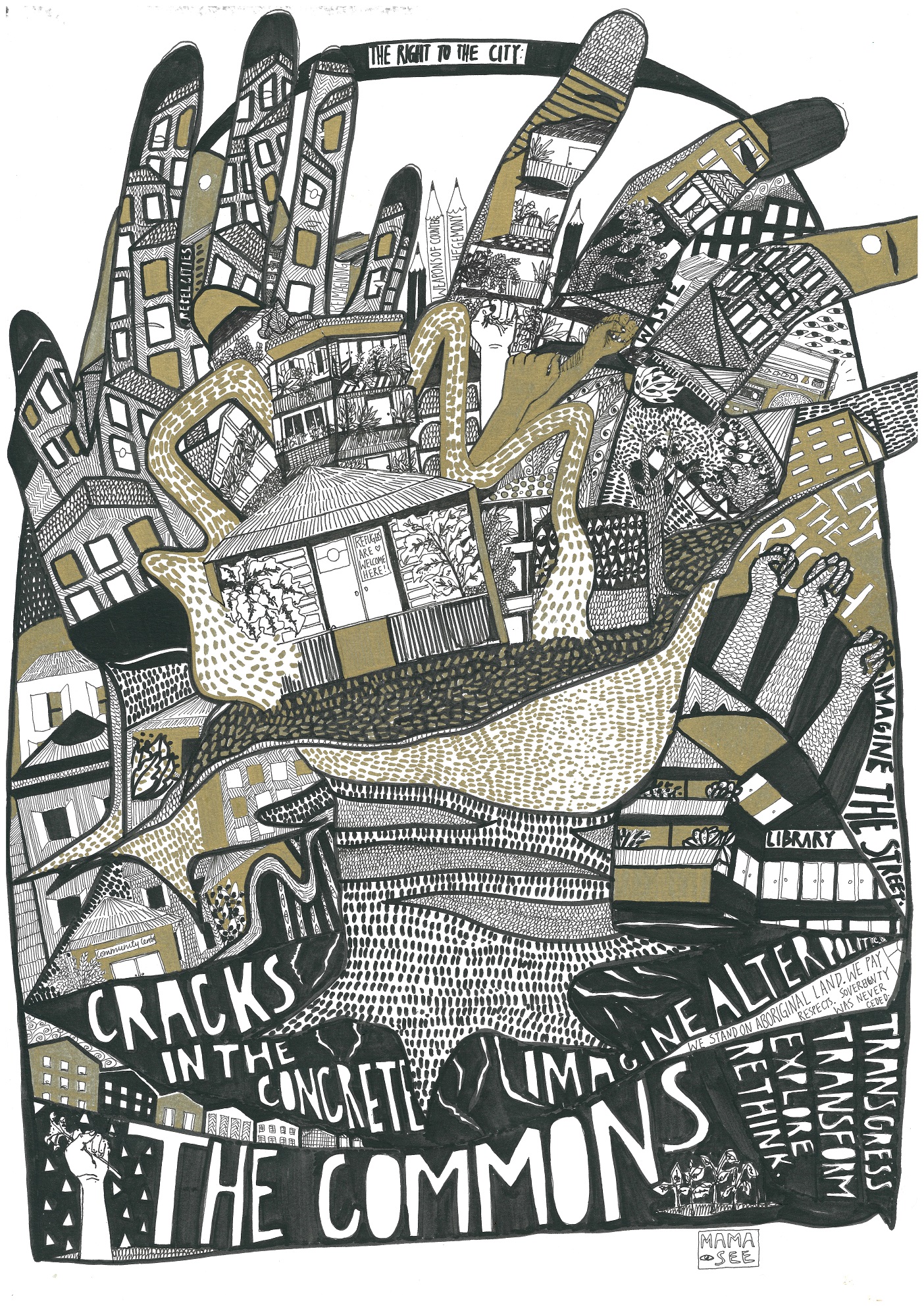