We've had some important wins with the Brisbane Metro project, including convincing council to make sure the new vehicles run on electricity rather than diesel. As I've explained previously, Brisbane Metro isn't perfect, but overall it does seem like a step in the right direction.

But the Metro project presents another great opportunity that we don't want the city to miss out on...

Grey St at South Bank is gradually becoming noisier and more dangerous because it's being used as a through-corridor for traffic heading to and from other parts of the city.

This is placing additional strain on the badly congested intersection of Vulture St and Grey St, and is making it harder to support Grey St to become a vibrant, active transport-friendly precinct.

A lot of commuter cyclists continue to ride along the South Bank riverfront because Grey St doesn't feel like a safe riding environment, and local residents living along Grey St have to deal with noisy trucks and faster-moving traffic.

One of the major costs and complications of the Brisbane Metro project is how to redesign the intersection of Melbourne St and Grey St to accommodate high volumes of buses and metro vehicles, as well as pedestrians and cyclists. Anyone who has tried to walk along Melbourne St to South Bank, QPAC or the museum knows how uncomfortable this intersection is for pedestrians.

But what if we were to close Grey Street to through-traffic as part of the Brisbane Metro redevelopment of the Cultural Centre Station ? 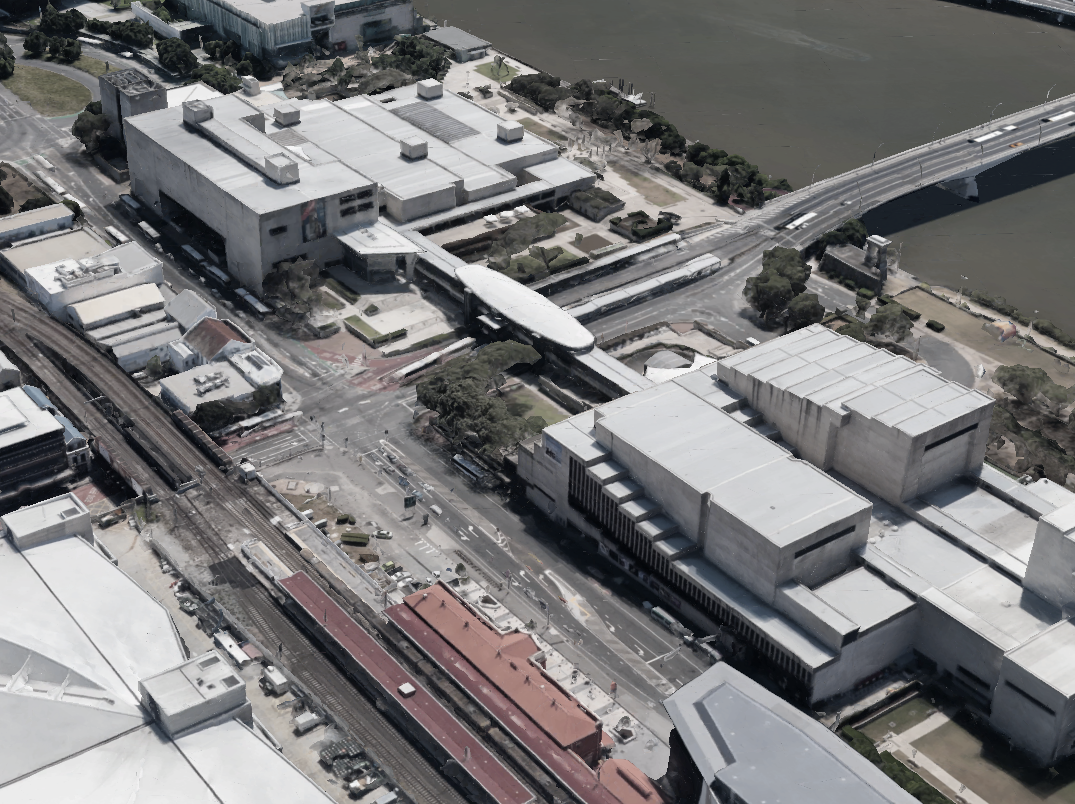 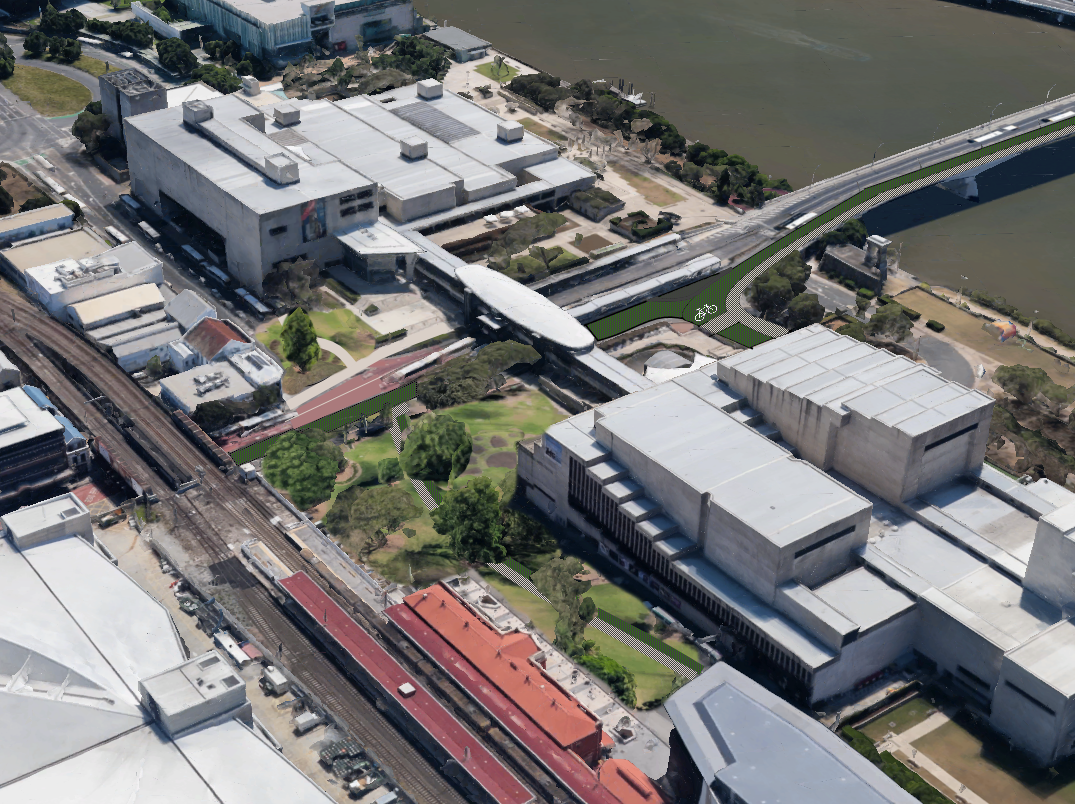 We could maintain local vehicle access for residents, businesses and the major South Bank carparks, but close it off just before the intersection with Melbourne Street, to keep through-traffic on Merivale St and Cordelia St where it belongs. This would reinforce Grey St as an active travel precinct, encouraging more walking and cycling, and improving connectivity through to South Bank.

There's another added benefit of closing off Grey Street near Melbourne Street...

We could convert roadway into green space to create a large new public park!

By closing off Grey St to cars just after the QPAC loading dock driveway, we could maintain a turnaround and drop-off zone to access the South Brisbane train station, while preventing cars from travelling through the Grey St-Melbourne St intersection.

A small park or plaza could also be created on the north side of the intersection between Melbourne St and Fish Lane. This plaza would allow for pop-up markets and public events in front of Fish Lane, while retaining a turning lane for buses to get onto the Victoria Bridge if necessary.

All up, we could create almost 5000m2 of new public parkland, right in front of the South Brisbane train station.

As South Brisbane develops and densifies, we need to create new public green space for apartment residents who don't have their own backyards. Converting road space into bikeways, pedestrian boulevards and public parks is a cost-effective and sustainable way to improve inner-city quality of life.

Creating a park on Grey St would bring some much-needed greenery to this hot and heavily concreted precinct, while also offering a much more appealing introduction to South Bank than visitors currently confront when they step out of the South Brisbane train station.

From an active transport perspective, there are so many advantages to this approach, as pedestrians would be able to flow freely from South Brisbane train station to the new Metro station to QPAC, the museum and the South Bank riverfront, without having to wait for cars.

This would also improve the efficiency of other intersections at both ends of Grey St - particularly the intersection of Peel St and Grey St, which could have a greater focus on moving through-traffic travelling via Merivale and Cordelia.

We're not saying this proposal definitely HAS to happen, or is the only way to redesign South Bank. But we wanted to put it out there as another possibility to broaden the parameters of debate and make sure all options are on the table when council and the state government are debating options for redesigning the Culture Centre station as part of the Brisbane Metro project.

The opportunity to create 5000m2 of additional public parkland is not something we should be passing up too hastily. 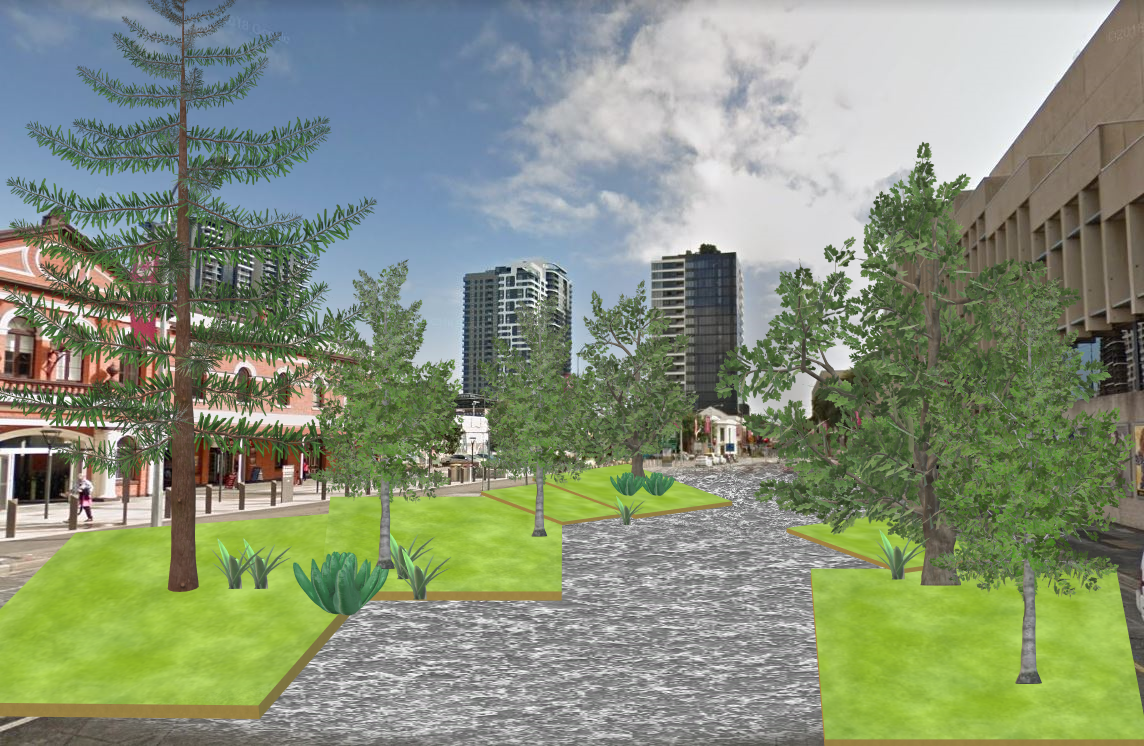