Looking for the online poll to vote on the proposal for a toilet block in Highgate Hill Park? Click here.

Highgate Hill Park already gets a lot of use from people who live immediately around the park, but also from residents from other parts of West End, Highgate Hill, South Brisbane and Dutton Park. A toilet would make the park more accessible for a wider range of demographics – particularly families with young kids, and people with incontinence.

We’re talking to council about installing a small toilet – with two cubicles – on the Hampstead Rd side of the park, to the south of the footpath (see accompanying image). 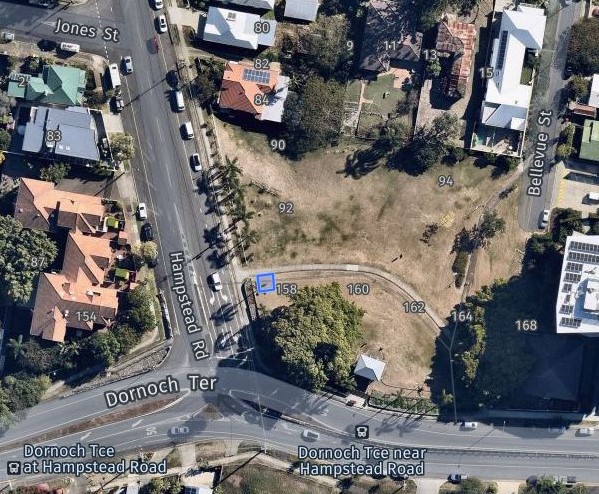 This location:
- would avoid impacting views from the top of the hill
- is close to the road for ease of maintenance/cleaning access
- is closer to existing underground water, power and sewerage lines
- connects to an existing footpath (minimises the need for more concrete)
- is roughly 40 metres from the nearest homes (similar to existing toilets in other Gabba Ward parks)

We know some residents don’t want a toilet in this park, so we’re holding a community poll to make sure everyone’s view is counted. You can vote in the poll, and leave comments if you're undecided and want more info. (To avoid duplicate responses, you have to provide a name and contact email to create a voting account.)

In the past, it wasn’t common to build new toilets in parks of this size, however we’ve recently installed toilets in other small parks like Bunyapa Park and Buranda Common. We’ve seen that the presence of a public toilet makes a park significantly more useable for picnics etc.

If there's general support for a toilet in the park via this poll, we'll commission a design and seek further public feedback on the details of how it looks, and on what time of night toilets should be locked (this is a relatively easy thing to change from time to time if needed).

If a resident is unable to vote online, they can get in touch with the Gabba Ward Office via [email protected] or call 3403 2165 and we'll be happy to take down their details and record their vote through the system.

For further reading on the difficult question of making democratic decisions about the design and management of public space, check out this blog post.