If there are any Labor supporters out there who are still genuinely concerned about climate justice, please understand that Queensland Labor is part of the problem, and will not shift unless it loses votes and seats to more progressive alternatives like the Greens.

Right now, Labor MPs in some parts of Queensland are actively campaigning for and promising new coal mines. In contrast, so-called ‘progressive’ Labor MPs who claim to be concerned about global warming are not promising or campaigning on a platform of shutting down coal mines.

Both the party’s actions in government, and its election commitments, show there is no genuine commitment to do what’s necessary to bring down global carbon emissions. 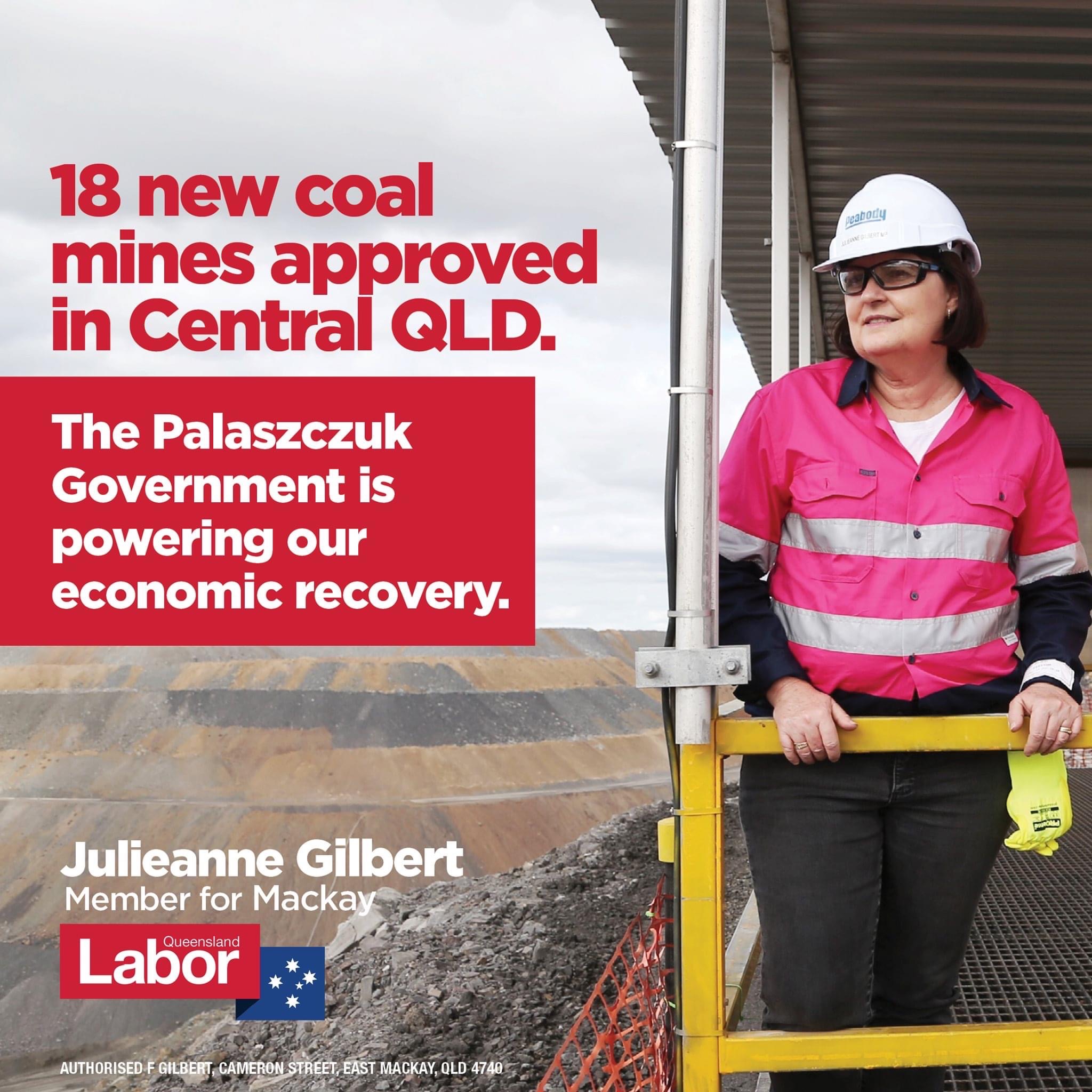 In response to criticisms about its support for new coal mines and failure to take global warming seriously enough, QLD Labor has offered five inter-connected arguments to convince people to keep voting Labor ahead of the Greens:

2. We need to keep the LNP out, and voting Greens jeopardises that.

3. We need to keep the LNP out, and supporting new coal mines is the only way to do that.

4. We need to support new coal mines for now, because a just transition still requires us to keep creating new jobs in regional towns.

5. We need to keep progressive Labor MPs in the party room to ‘drag the party back to the left’

None of these arguments stacks up to close scrutiny. Let’s start with the first one...


No. Definitely not. Not even close.

Although there have undeniably been some positive steps towards establishing new renewable energy projects, Labor’s target of supplying 50% of the state’s electricity from renewable sources by 2030 is woefully inadequate (particularly when you consider that the state is also doing a piss-poor job of addressing Queensland’s other major sources of carbon emissions, such as industrial-scale animal agriculture and oil-powered transport systems).

For comparison, South Australia has a target of 100% renewable energy by 2030, and the major parties’ fear of losing votes to the Greens in SA has undeniably been a key factor behind that.

But if you take nothing else away from this post, this next point is perhaps one of the most important:

By digging up and exporting coal to be burnt overseas, Queensland is contributing to extremely high carbon emissions that far exceed our own energy system’s domestic emissions.

So it’s the stuff that we sell other countries to burn which is a far bigger contributor to carbon emissions.

From the perspective of mitigating global warming, focussing too heavily on how many new solar and wind projects Queensland sets up to replace thermal coal power plants is actually a bit of a distraction.

Queensland Labor has deliberately tried to shift discussion to the new domestic renewables projects it is establishing, to distract from the fact that we are still exporting way too much coal.

For Labor to claim that it is ‘taking positive steps’ towards a renewable energy future, while continuing to support new coal mines and exporting more and more coal, is deeply misleading.


This is just straight out nonsense.

There are 93 seats in the Queensland Parliament, so you need at least 47 seats to hold power.

If the Greens win a few seats off Labor, the combined total of Labor and Greens seats in the parliament would still remain the same. Even if we end up with 45 Labor seats and 4 Green seats, the total still adds up to 49 seats.

Obviously if Labor loses seats to the LNP, that’s bad for Labor, but voting 1 Greens doesn’t impact that as long as you still put Labor above the LNP when you’re filling out all the numbers on your ballot paper.

Which brings us to the next argument…

3. LABOR CLAIMS IT HAS TO SUPPORT NEW COAL MINES TO KEEP OUT THE LNP


This is the argument that personally makes me really sad, because it shows how lacking in vision both the major parties have become.

I’m the first to point out that Bob Brown’s ‘Stop Adani Convoy’ before the federal election was an idiotic and unhelpful political strategy.

Sending large numbers of people up to actually blockade a mining corporation might have been a different matter. Sending southerners up on a ‘tourism jobs’ convoy to show regional towns that there’s money to be made from hospitality and tourism might also have helped.

But Bob Brown driving to Clermont to lecture coal mining communities about how ‘coal is evil’ was never going to work.

You have to explain and show that alternative futures are possible.

In recent elections, the Queensland Greens vote has grown consistently (no thanks to Bob Brown), not just in South-East Queensland but throughout the state. It has grown because we’ve articulated a broad policy platform that offers everyone a higher quality of life without relying on new coal mines as a key source of job creation.

We’ve been articulating a more diversified economic future for regional Queensland, that creates jobs through renewable energy generation, sustainable regenerative agriculture, public housing construction and maintenance, cultural and environmental tourism etc. And it is working for us as an electoral strategy.

Voters in regional Queensland aren’t stupid. They know that global demand for thermal coal will continue to decline long-term. So when Labor says its economic plan is to create more jobs in coal mining, that doesn’t actually win over many voters who would otherwise support the LNP. In fact, it frames the election debate into a question of which party will be MORE supportive of coal mining, which is weak ground for Labor.

It’s possible for Labor to win votes without supporting new coal mines. Labor parties in other states and other countries have done that. For Labor strategists to argue that Labor won’t be able to remain in power unless it supports new coal mines is perhaps the strongest evidence we need that Labor is not going to be an effective vehicle for action on climate change.

Electorally speaking, they would be better off copying more of the Greens platform, and talking about a broad public sector-led transition to other industries, which supports people to retrain in other fields and protects vulnerable communities from the negative impacts of economic recession.

As a side note: Own-goal ads like the one at the top of the page from Labor’s Mackay candidate show how sitting on the fence and trying to say completely different things to different parts of the electorate is not a viable long-term strategy.

In the 2017 election, Labor told central Queensland voters they would support Adani and told SEQ voters that they would oppose it. In the end, they didn’t pick up any new seats in the inner-city OR in regional Queensland.


This is where the influence of mining industry lobbyists on the Labor party becomes most obvious.

Opening up new mines and creating more jobs in coal mining DOES NOT assist regional towns to transition away from dependence on coal mining. It leads them further down a dead-end road and sets them up for failure as global demand for thermal coal decreases.

Greens politicians are not arguing that we have to shut down every single coal mine and power plant overnight. We are calling for greater public investment to create jobs in other sectors and industries, for a proper social support net in terms of guaranteed housing, free healthcare and free education, and we are arguing that the billionaires, mining corporations and big banks that have made so much money out of the resources boom should help pay for it all.

Maintaining the charade that there will be plenty of jobs in coal long-term hurts everyone, especially regional mining communities. Queensland already has enough money to fund a just transition that doesn’t leave anyone behind. We don’t need an expansion of coal mining in order to support a transition away from coal mining.


This is perhaps the weakest of all the arguments Labor offers against voting Greens, because all available evidence contradicts it.

Labor has been in government for two terms in a row now. And prior to 3 years of Campbell Newman from 2012 to 2015, Labor had held government in Queensland for the better part of two decades.

Labor politicians like Grace Grace and Jackie Trad spin the line that having them in the party room helps balance the more conservative views of regional Labor MPs, and that without them, Labor would drift even further to ‘the right.’

But here’s the thing: even with those people holding ministerial positions and a great deal of influence within the party, Queensland Labor is still doing dodgy deals with multinational corporations, and supporting big new coal mining projects like the Adani and New Acland projects.

These supposedly ‘progressive’ Labor MPs have not been able to prevent new coal mines being established, and in fact have voted to support them and give them royalty deferrals. These ‘progressive’ Labor MPs haven’t even been able to introduce basic cost-neutral reforms in other key areas like strengthening renters’ rights or preventing deaths in custody.

In fact, even with these ‘progressive’ MPs in the party room, Labor has become more authoritarian and conservative, announcing massive increases in prison and police funding and tighter laws to suppress public protest, without meaningfully increasing funding for public housing, domestic violence support services etc.

If anything, the continued presence of these MPs is a net loss to ‘progressive’ advocacy in Queensland. They speak the jargon and uphold the façade of Labor as a ‘progressive’ party while voting in favour of a policy platform that embodies and entrenches neoliberalism. They use their platforms to promote Labor as a party of social justice and equity while selling off public land to private developers and granting cash-for-access meetings to big business lobbyists.

I’m not questioning their motivations. They probably think they’re doing the right thing and are helping keep out the LNP.

But to suggest that we will have a better chance of stopping new coal mines like Adani with Labor MPs like Grace Grace, than with Greens MPs who hold the balance of power and can demand real change, is utterly nonsensical.

If you still think that supporting Labor helps address global warming (it doesn’t), please at least take a moment to understand how preferential voting works, and recognise that wherever you live in Queensland, voting 1 Greens (and numbering every box) is a much more effective way to send a strong message to the major parties.