This week, I'm calling for the introduction of two new CityGlider routes to fill gaps in Brisbane’s public transport network.

Getting from one suburb to another by bus or train is often a lot harder than getting in and out of the CBD, and we need to improve inter-suburban connectivity so that people can make the shift away from depending on private vehicle transport.

These route proposals are not final or definitive. We’re putting them out there to seek feedback and crowdsource residents’ insights to create the best possible route alignments. Where should the stops go? Exactly where should the services terminate? And are these the best streets for high-frequency buses to be using? 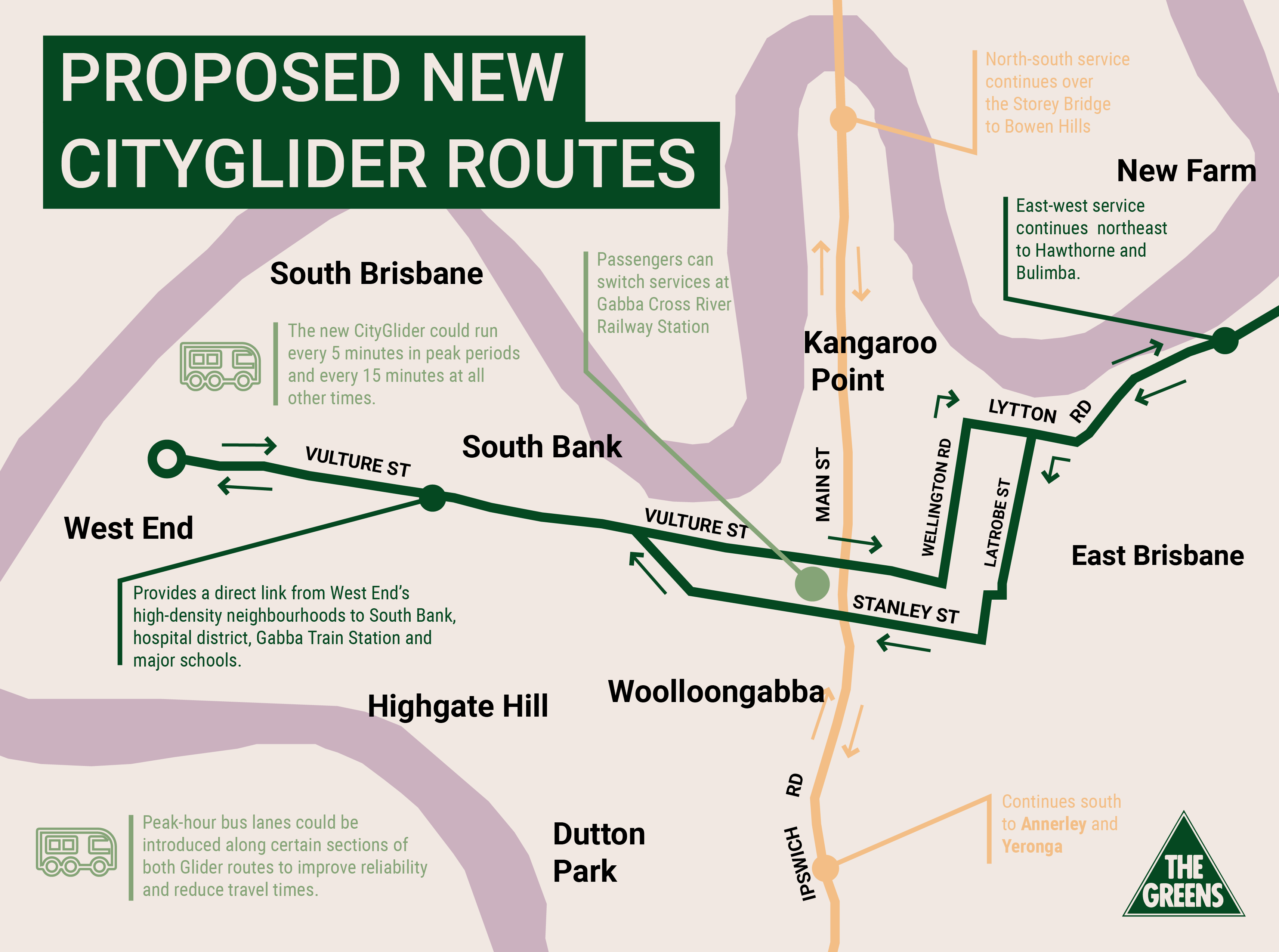 The Green CityGlider route is focussed on cross-suburb travel, connecting people from predominantly residential areas like East Brisbane and Hawthorne to employment and service hubs like the major hospitals in South Brisbane/Woolloongabba.

It would run from the intersection of Vulture St and Montague Rd in West End, and turn around at the Bulimba roundabout where Oxford St meets Hawthorne Rd and Riding Rd.

Crucially, it provides a direct connection between West End’s high-density areas along Montague Rd, through the Boundary St commercial precinct to South Brisbane and Woolloongabba, without having to go in and out of the Cultural Centre bottleneck.

The north-south Orange CityGlider would fill one of the biggest gaps in inner-city Brisbane’s transport network, connecting Kangaroo Point, Annerley and Woolloongabba to major destinations in Fortitude Valley and Bowen Hills. It also picks up quite a few school catchments along Ipswich Rd and Main St which currently generate a huge amount of peak-hour traffic.

We suggest the Orange CityGlider could run from Cracknell Rd, Annerley to Campbell St, Bowen Hills.

Both of these routes could be augmented by introducing dedicated peak-hour bus lanes through key choke spots, so that catching the bus is always quick and reliable. They would run at high frequency, so that you could turn up to the stop at any time of the day or night and be confident of getting a ride. They intersect at the Gabba Station and Stadium, reinforcing this as a transport node so that people can easily change services and head to different parts of south/east Brisbane without having to go all the way into the Cultural Centre to transfer. 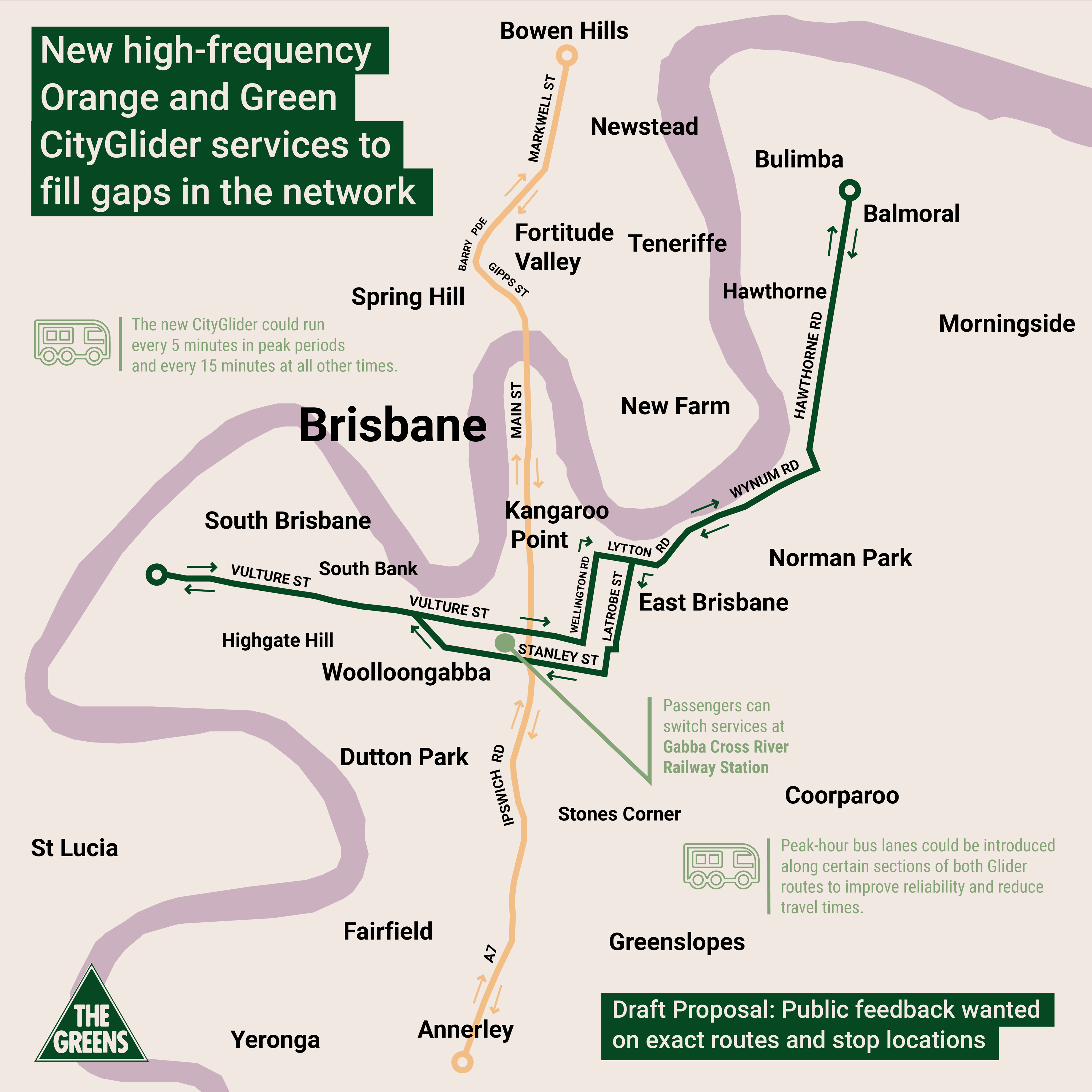 Cross-suburb connections like these also improve network resilience, as these high-frequency routes can still flow reliably, even if a car crash or flooding causes a traffic jam on one of the main roads leading directly in and out of the city.

Alongside our call for free off-peak public transport for everyone, a change like this would greatly improve connectivity and mobility, particularly for lower-income residents who don’t have access to private vehicles.

For those who are wondering about funding, we’ve estimated that these new routes would each cost around $5 million per year to run. But we know that other services such as the Blue CityGlider actually earn the council more than that in ticket revenue because they are so popular. Thinking bigger-picture, it is actually cheaper and more efficient for people to move around the city via public and active transport than by private vehicles.

Each year, council spends hundreds of millions of dollars maintaining and widening roads, as does the State Government. Getting more people out of their cars and onto public transport is great for the environment, and would also save a lot of money in the long-term, because a single bus needs much less road space and causes a lot less wear and tear on the road than dozens and dozens of cars.

If you want to support the push for these new CityGlider routes, you could also email the Minister for Transport and Main Roads via [email protected] and the Lord Mayor at [email protected]